From The Vault: Two Cincinnati police officers ambushed, slain in 1997 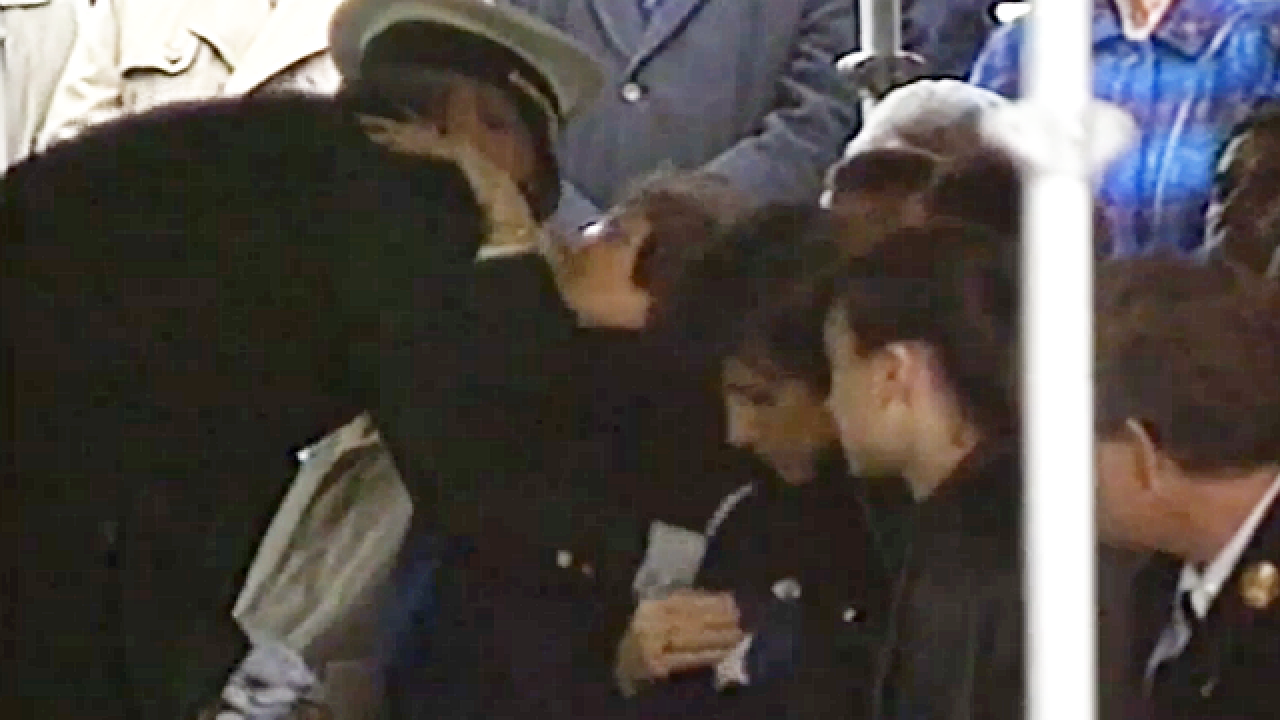 Copyright 2017 Scripps Media, Inc. All rights reserved. This material may not be published, broadcast, rewritten, or redistributed.
<p>Linda Pope, widow of Officer Daniel Pope, clutches the flag from her husband's casket after Police Chief Michael Snowden presented it to her at the grave site.</p> 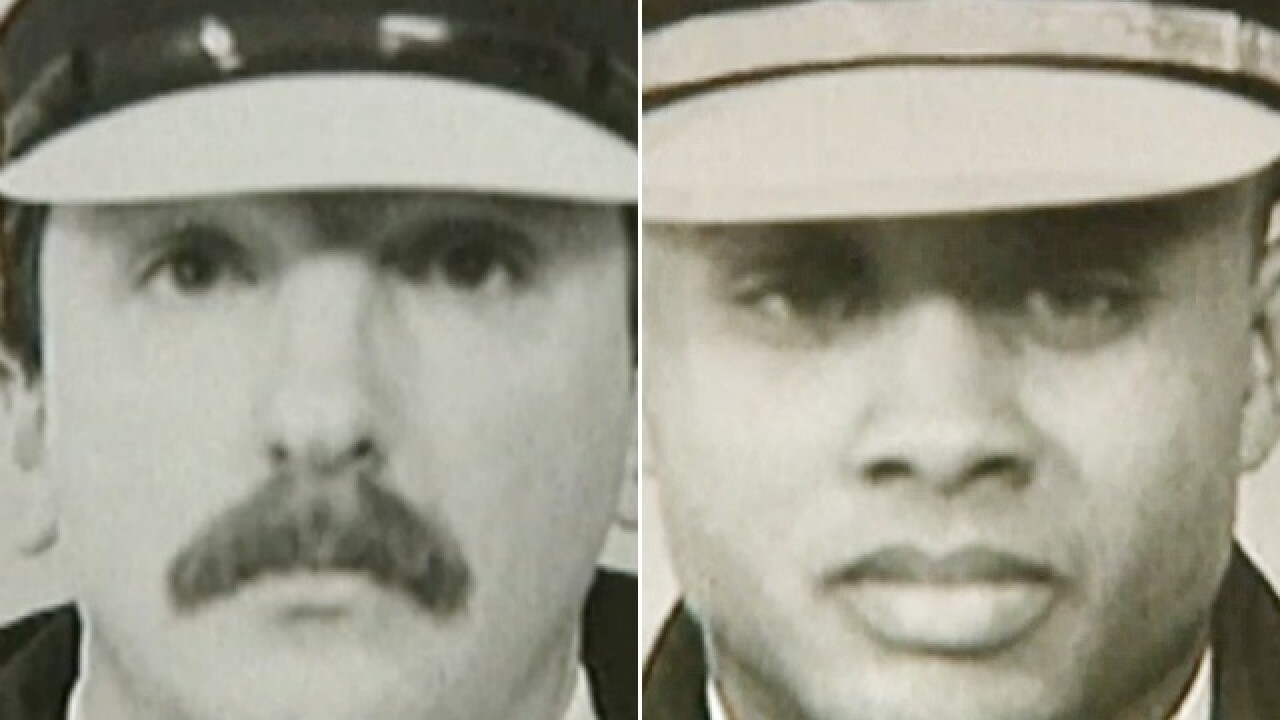 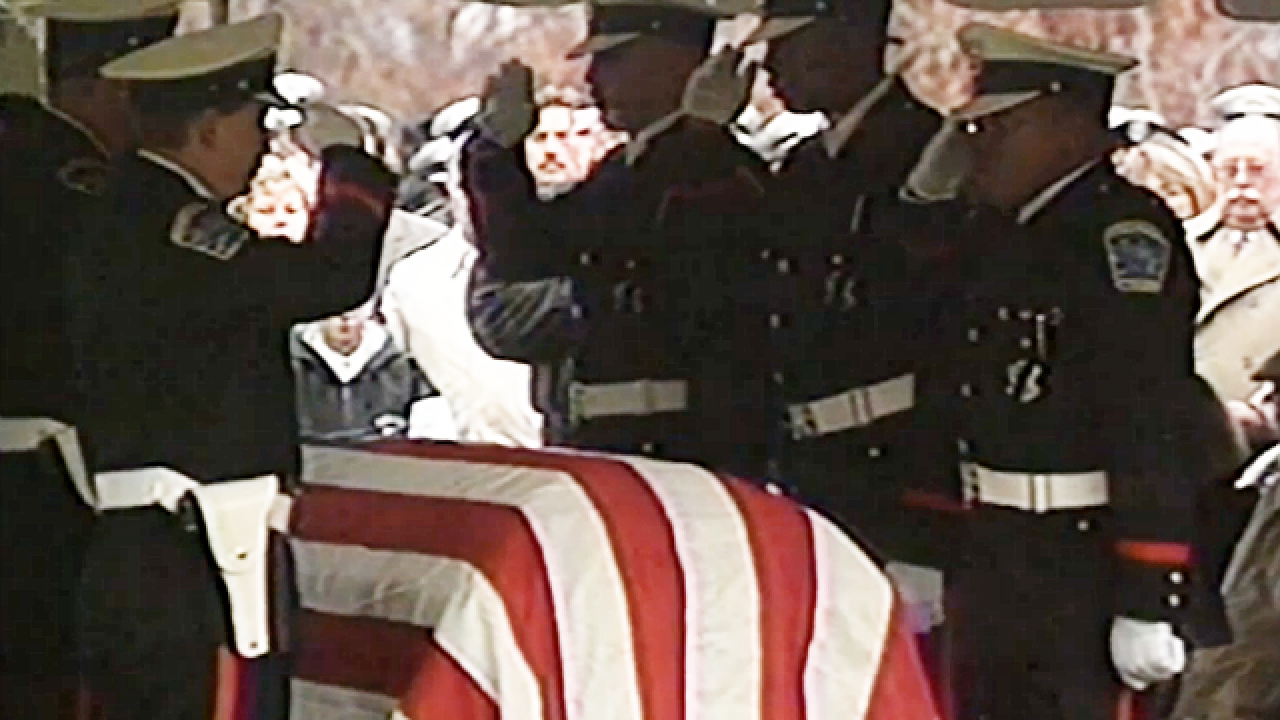 WATCH what happened that night in the video player above.

CINCINNATI – One of the worst tragedies to hit the Cincinnati police department happened 20 years ago on Dec. 5, 1997.

Two officers were shot to death in an ambush in a Clifton Heights apartment. The killer ran up the street and turned the gun on himself barely a block from the University of Cincinnati.

As police responded to calls about a suicide on the sidewalk, dispatchers got confused and didn’t send help to the mortally wounded officers, even after getting a frantic call from inside the apartment.

Dispatcher: “What do you see?”

Caller: “I see two undercover cops right in front of my face. They dead, man!”

Another officer didn’t arrive at the apartment for 49 minutes.

"This is a tragedy I can’t even begin to describe for you," Police Chief Michael Snowden said solemnly the next day.

Specialist Ronald Jeter and Officer Daniel Pope had gone to 23 West Hollister St., two blocks south of the UC campus, to arrest 20-year-old Alonzo Davenport on domestic violence warrants. One woman said he choked her. Another said he punched her.

Jeter, 34, and Pope, 35, had been there before. They served on District 5’s Criminal Apprehension Team, which specialized in arresting hard-to-catch criminals.

Two nights before, Alana Strother, Davenport’s girlfriend and the mother of one of his two children, called police to say they had an argument and Davenport had fired a shot through the back door.

The next night, Jeter and Pope responded to the same apartment after Strother reported that Davenport had held a gun to her head and threatened to kill her.

Jeter and Pope staked out the neighborhood but weren’t able to find Davenport either night, so the partners, who worked an 8 p.m. to 4 a.m. shift, went back the next night just before midnight. They wore plain clothes but had their badges around their necks. Each wore a bulletproof vest.

Davenport was inside the apartment with two friends, Marvin Jones and Angela Mills, and a 14-year-old girl. According to Jones, Davenport looked out the window and saw Jeter and Pope walk up to the front door.

When the officers knocked, Davenport pulled a .38 revolver out of the recliner and hid it in the small of his back, under his shirt, Jones said. Then Davenport let Jeter and Pope into the apartment.

When Jeter ordered Davenport to put his hands behind his back, the men began to struggle.

Jeter and Pope didn’t have time to even draw their weapons. Davenport pulled his revolver and shot each man once in the head.

While Jones called 911 and reported the two officers down, Davenport ran up West Hollister to West McMillan Street and north to Calhoun Street. Other officers saw him running with gun in hand and pursued him through the St. George Church parking lot to Classen Park at 2557 Jefferson Ave.

Davenport stopped, put the gun to his head, and pulled the trigger, police said.

It wasn’t until 12:39 that a District 4 officer called in on his radio: “I have two witnesses. They claim that there might be another victim down on Hollister, in District 5. You want to send somebody down there?”

Moments later, at 12:45, another radio call blurted out the horrible truth.

“We need an ambulance at 23 West Hollister right now! Officers down!”

Jones, Davenport’s friend who witnessed the shootings in the apartment, told police he didn’t know what came over Davenport. Neither did family members.

“He wasn’t no bad guy,” said Davenport’s grandmother, Helen Jo Davenport, who said she raised him. She said she saw him five hours before the shootings.

“He was in good spirits. We were teasing, dancing and playing music - just doing what we do,” she said.

“They (Davenport and his girlfriend) were always nice around me,” said his landlord, Orville Clark. “I just couldn’t believe this guy was capable of doing something like this.”

But Clark also said Strother had moved out and Clark was in the process of having Davenport evicted.

“She found out about him having a gun. She was scared,” Clark said.

The city went into mourning. Hundreds brought flowers to the Police Memorial across from District 1. Thousands – fellow officers and citizens who didn’t know them - wept at their services.

"I think that the outpouring really is overwhelming," said Mayor Roxanne Qualls.

So many officers came to Pope’s funeral at St. Peter in Chains Cathedral downtown that many had to go to the Convention Center and watch on TV.

Pope, a six-year police veteran, had more friends than anyone on the force, fellow officers said.

Pope and his wife Linda, a Cincinnati firefighter, lived in a log cabin they built in Harrison, Ohio. They loved the outdoors and nursed injured animals back to health, said Sgt. Bill Halusek.

Jeter, a former Marine, liked to read Shakespeare and kept a volume of his complete works in his car, colleagues said. Jeter had only been on the force for four years but it was obvious that he had a bright future, said Halusek.

“To get nine letters of commendation in four years is pretty amazing,” said Halusek.

At the time, FOP President Keith Fangman saw the deaths of Pope and Jeter as an opportunity for the city to heal its racial tensions. Though Pope was white and Jeter was black, they were friends who wanted to be partners, Fangman said.

"They worked together and died together. They literally died side by side," with their heads leaning against each other, Fangman said.

"I hope the symbolism of that is not lost on the community," Fangman said.

A year later, WCPO talked to Linda Pope and Jeter's mother, Brenda Collier. Collier said she was relying on her church and her faith for support. She was busy trying to raise $350,000 for a crisis counseling center in Columbus in her son's memory. She said she hoped it could help troubled people like the 20-year-old man who killed her son.

She said the strength people saw in her following her son's death "was not Brenda."

"The hardest part is getting up every morning and knowing Dan's not here anymore," she told WCPO.

"I'm angry. This was a person who meant more to me than anything in the world and he was ripped away from me ... Yeah, I'm angry. I'm mad as hell!"

Linda Pope fought city hall to get officials to keep their promise to pay for her husband's funeral. She also pushed the city to fire the 911 dispatchers who didn't send help to him and Jeter.

Jeter and Pope hadn’t notified dispatch that they were approaching and entering Davenport’s apartment, police said.

Two dispatchers were fired. One officer was reprimanded for providing false information.

It was the first double killings of Cincinnati police officers since 1979 and the first time an officer had died in the line of duty in over 10 years.

That was Officer Clifford George, who was shot to death on the same street on April 16, 1987.