From The Vault: Tornadoes bring destruction, death to Tri-State

Thirty-one people have died locally in tornadoes and severe storms since 1968. The worst and most widespread damage came on April 3, 1974, during the country's deadliest Super Tornado Outbreak. There were a record 30 F4-F5 tornadoes in six states in a 24-hour period (April 3-4). That included an F5 with 300-mph winds that practically destroyed the nearby town of Xenia, Ohio, and killed 33 people and injured 1,150 there. The same system that spawned the Xenia tornado first came through Greater Cincinnati. Ten tornadoes touched down in the Tri-State on the day before Reds Opening Day, starting around 4 p.m. and continuing into the night. At one point, the National Weather Service was tracking five funnel clouds on its local radar at the airport.

CINCINNATI – Charles Mara of Sayler Park said he would never forget the terrifying sight of the April 3, 1974 tornado bearing down on his house.

He said his wife and three sons had called him to the front door to look at a funnel cloud crossing the Ohio River. He told them to get under the couch - just in time.

"It lasted about a minute and then I looked and everything was gone – the roof, the walls, everything. There was just nothing left," he said.

Laurie Arshonsky and her husband Stephen were asleep when a tornado hit their Montgomery Woods home before dawn in 1999. She remembered the sound – like a freight train – and their house shaking.

"The house was crashing in and the winds were picking me off the bed …  and I believed I was about to die," she said.

They were thrown 30 yards almost to the curb. She had five cracked ribs and a collapsed lung. He had a fractured hip. Their neighbors were thrown from their home, too. They were killed.

In 2012, Patty Ballard watched a tornado barreling across the horizon toward her home in Northern Kentucky.

The Tri-State may not be part of "Tornado Alley," but springtime tornadoes and severe storms almost seem like a regular occurrence.

"The transition from winter to spring brings these deadly storms. And historically, these devastating tornadoes have happened once a decade since the 1970s," said WCPO Chief  Meteorologist Steve Raleigh, adding this warning:

"It's going to happen again."

There have been eight official tornado days here since 1968 – and that's not counting a deadly storm in 1986 that caused severe damage in Northern Kentucky to the airport, Fort Thomas, Covington and Newport. We have even seen tornadoes in August (1969) and November (1992).

Thirty-one people have died locally in tornadoes and severe storms since 1968.

The worst and most widespread damage came on April 3, 1974, during the country's deadliest Super Tornado Outbreak. There were a record 30 F4-F5 tornadoes in six states in a 24-hour period (April 3-4). That included an F5 with 300-mph winds that practically destroyed the nearby town of Xenia, Ohio, and killed 33 people and injured 1,150 there.

"This boggles the mind," Ohio Gov. John Gilligan said after touring the area. "There is just no way to calculate the damage."

The same system that spawned the Xenia tornado first came through Greater Cincinnati. Ten tornadoes touched down in the Tri-State on the day before Reds Opening Day, starting around 4 p.m. and continuing into the night. At one point, the National Weather Service was tracking five funnel clouds on its local radar at the airport.
<figure class=" full"=""> 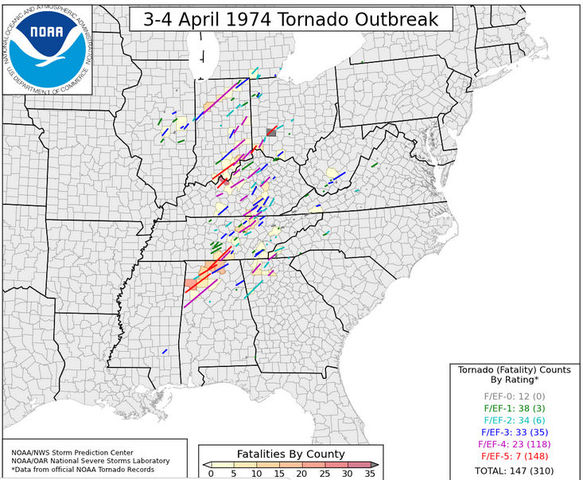 Those tornadoes killed five people in Hamilton County and sent more than 200 injured to hospitals. More than 350 homes were destroyed and hundreds more were badly damaged. Two more deaths were reported in Franklin County, Indiana.

The biggest tornado crossed the Ohio River and laid waste to Sayler Park, then proceeded into Mack and Bridgetown, ripping off the roofs of Our Lady of Visitation and Springmyer schools and destroying scores of homes in those residential areas before spreading its damage north to Roselawn, Elmwood Place and Sharonville.

It also killed 250 horses in Butler County on its way to Xenia.

WCPO photographer Ron Fischer, who retired in 2017 after 50 years on the job, remembered flying in the station's helicopter with legendary anchorman Al Schottelkotte that day and shooting tornado damage. He drove back to Xenia with a reporter later that evening.

"That was an eerie feeling. You couldn't see anything," Fischer said. "We're driving down the roads. Lightning was lighting up all over the place."

A total of 315 people died in 11 states died during the two-day outbreak.

The most Tri-State deaths – nine – happened on March 2, 2012, when a tornado skipped from  Ripley County, Indiana, to Kenton and Grant counties in Northern Kentucky and to Clermont County in Ohio.

That EF3-EF4 tornado struck late on a Friday afternoon. Cindy Gorth's aunt, Carol Forste, lived in Moscow on Elizabeth Street near the river. Forste died in the rubble of her house as Gorth and others tried to rescue her.

SEE how the Enhanced Fujita Scale, adopted in 2007, measures tornadoes.

"You don't realize how much material things really don't mean until you lose someone," Gorth said.

About 80 percent of Moscow's  homes and businesses were destroyed, but Mayor Tim Suter hoped that someday the rivertown's natural beauty would be restored.

"It won't be that way for myself and my generation, but for future generations hopefully it'll come back to the same beautiful area it was along the Ohio River," Ster said.

"I don't know what is was. I just never seen anything like it," Cooper said afterward.

On April 9, 1999, an EF4 tornado with 200-mph winds smashed into heavily-populated Blue Ash, Montgomery and Symmes Township just after 5 a.m.  Two motorists were killed, in addition to the Arshonsky's neighbors, Lee and Jacque Cook. A small pickup truck on I-71 was picked up and dropped upside-down on the concrete barrier in the middle of the highway.

A total of 92 homes and 40 businesses were destroyed and 194 homes suffered major damage, officials said. There was $2 million damage just to Cincinnati Hills Christian Academy middle and elementary schools. Because the middle school lost its roof, 340 students had to cram into the high school to finish the school year. The gym and other large areas were converted into classrooms.

A day after the 1974 tornadoes, Opening Day in Cincinnati went on as scheduled even though the sight of so much destruction – in person or on TV – and so many deaths and injuries left many fans in a somber mood. The season was starting with Hank Aaron one home run away from tying Babe Ruth's career record of 714, and Vice President Gerald Ford was here to honor Aaron if he homered.

Aaron obliged in the first inning and the crowd – and the city – came back to life. Pete Rose knocked in the tying run in the bottom of the ninth and scored the winning run in the 11th, and baseball, as Terrence Mann would say, would remind us of all that once was good, and that could be again.

9 On Your Side Meteorologist Jennifer Ketchmark contributed to this report.