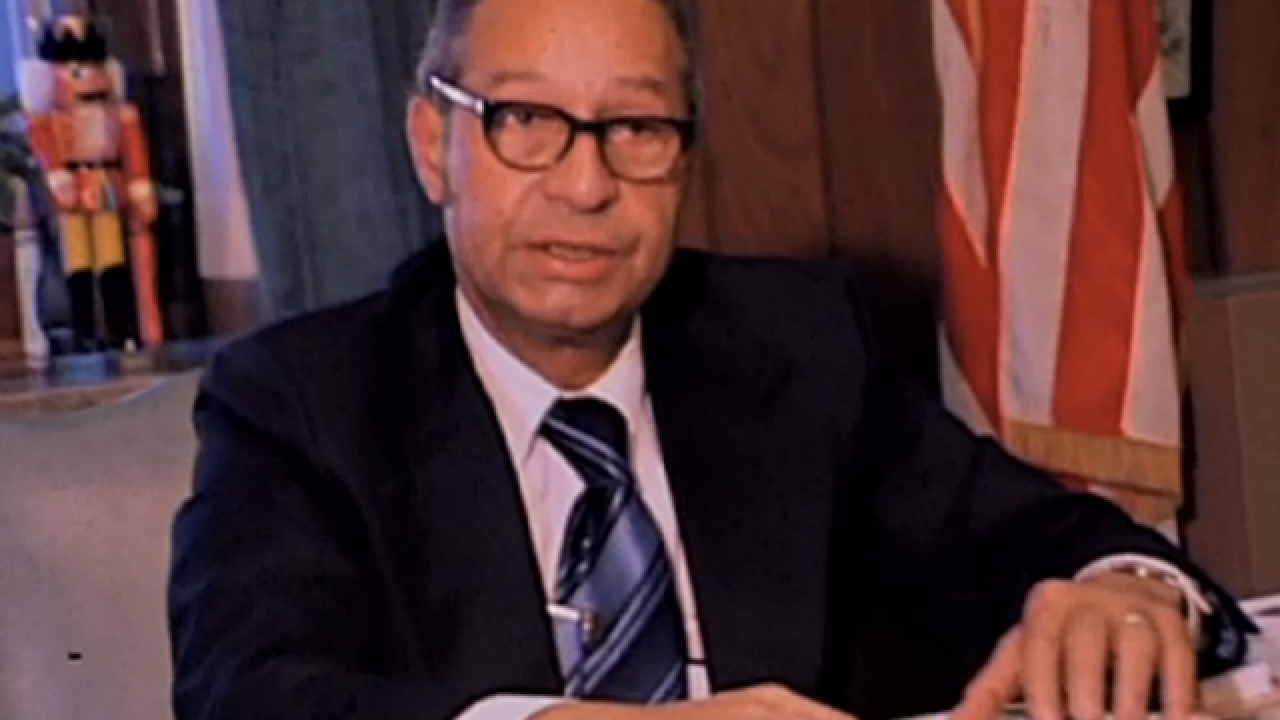 “Few if any Cincinnatians have achieved his stature and meant more to this community than he did,” Mayor Charlie Luken said. “In some neighborhoods he was revered like no other Cincinnatian.”

“An oak of righteousness, a planting of the Lord,” said Rabbi Alfred Gottschalk, former president of Hebrew Union College.

“A towering figure who exuded the persona of a fighter against great odds,” said Ohio House Majority Leader William Mallory.

“He was, without question, one of the most significant figures of the second half of the last century,” said U.S. Court of Appeals Judge Nathaniel Jones. “This city would not be as it is today if not for the leadership he provided.”

When Ted Berry became the first black mayor of Cincinnati in 1972, he never thought to govern through divisiveness. He didn’t express any bitterness about the racism of the times had kept him out of the city’s highest office almost two decades earlier.

WATCH tributes to Ted Berry upon his death:

Berry was a different politician – a man of the people, a champion of civil rights and social justice, a leader who brought a rare sense of dignity to public office, a man of action who conveyed strength and compassion and spoke to everyone through measured words and a mellow tone.

Berry grew up a fighter, but he didn’t throw punches or spew hate.  He was a unifier, not a divider. He made that clear throughout his life and when he took the oath of office on Dec. 1, 1972.

“If there is to be a theme for this administration, I  think it would be the theme of togetherness,” Berry said.

The odds were against Ted Berry from the day he was born to a poor white farmer and black deaf-mute mother in Maysville, Kentucky, in 1905. But Berry worked his way out of poverty in the West End with grit, determination and education.

He took whatever job he could find – shining shoes, delivering newspapers, washing windows, waiting tables, working in steel mills. He became the first black valedictorian at Woodward High School and, along the way, overcome his first obvious encounter with institutional racism.

Berry had entered an essay contest, writing about Abraham Lincoln, but his entry was rejected because of his race. Undaunted, he submitted it again with a different title and under a pen name that carried a message of its own, Thomas Playfair.

Two winners were chosen – a boy and a girl. Berry was picked the boys winner. But he wasn’t allowed to accept his award with the white girl who won the other half of the contest.

Berry went on to graduate from the University of Cincinnati and UC Law after considering to become a doctor.

“When I was in high school, my elder sister and brothers were encouraging me to study medicine,” he recalled. “When I got to college, I found I was more interested in the science of people as they relate to their community. So I chose to go into law and, after that, politics.”

At 26, Berry became the youngest president of the local NAACP. He sued one of the city’s corporate giants, Crosley Radio, for not having any black workers, and he took on the Board of Education because there were no black members.

He won an acquittal for a black man sentenced to the electric chair.

WATCH: Ted Berry talks about the impact of anti-poverty programs:

In 1949, he was elected to the first of three consecutive terms on city council.

In 1955, Berry became vice-mayor under Charles P. Taft and tearfully acknowledged the significance of the moment, saying, “I am fully aware that a new page in the history of our great city is written today.”

Berry was top vote-getter in the 1955 council race and looked like a strong candidate for mayor, only to be undermined by racism when voters, at council’s urging, abolished the system of proportional representation for an at-large system.

“It was the other council members who were not ready (for a black mayor), not I,” Berry said years later.

He finished 14th in the 1957 council race and stepped away from politics.

Berry became deeply involved in the civil rights movement in the South. He and Thurgood Marshall, future U.S.  Supreme Court justice, traveled from city to city – at great personal risk  - to file lawsuits. They flipped a coin to see who would sleep in the motel bed nearest the window.

Berry also used his time out of public office to create Cincinnati’s first community action commission in 1964. That enabled the city to participate in President Johnson’s War on Poverty programs.

Berry’s work caught LBJ’s eye, and the president called him to Washington and made him assistant director of the Office of Economic Opportunity, overseeing the Head Start, Job Corps and legal services programs.

After Richard Nixon won the White House in 1968, Berry came home and was appointed to fill a council seat. Four years later, he was accepting the mayor’s gavel as chosen by the Charterite-Democrat coalition, which had the council majority.

In a packed City Hall chambers, Berry used his acceptance speech to emphasize what he called an "historic” occasion.

“Today marks the symbolic recognition of the Afro-American community as a full and responsible party in the governance of our city,” Berry said. “Thus the city has grown in maturity and civic spirit.”

Berry stated his pragmatic goals: run a balanced budget by planning two years in advance, disperse revenue sharing money into broad channels of social services, increase job opportunities for blacks and reduce crime. He pointed out that 48 percent of unemployed men were black.

Three years after riots in the city, Berry wanted to bridge blacks and whites with the same values and purpose.

“We will succeed as we bind our citizens not by the bond of money or profit alone, but by the ties of neighborly concern and good will,” he said.

He went on to paraphrase from a prayer posted on the wall outside the chambers.

“Grant us a vision of our city:  a city of justice where none shall prey on others, a city of plenty where vice and poverty will cease to fester, a city of brotherhood, a city of peace where order shall not rest on force but on love of all for the city.

“If we strive for this ideal together,” Berry said, “we can achieve a true sense of community. To this goal I pledge my earnest efforts as mayor of this great city.”

WATCH: Tributes to Ted Berry at his funeral:

Berry left politics in 1975,  and in his later years he said he hoped he set a life’s example that people can overcome great obstacles and make a difference. He hoped he would serve as an inspiration for other African-Americans.

“I just set out consciously and subconsciously to make it,” Berry told the late Cincinnati newspaper reporter Barry Horstman during an interview for Horstman's book, “100 Who Made A Difference."

“Maybe they should write a poem about me that says, ‘They told him it couldn’t be done, but he did it.'”

“People still think of him as their mayor,” Luken said upon Berry’s death.

But Berry’s one big dream is still unfulfilled.  One year after Berry died, riots followed the fatal shooting  of a 19-year-old black man, Timothy Thomas, by a white Cincinnati police officer, Stephen Roach. And today, racial tensions are still high following the 2015 shooting of a black motorist, Sam DuBose, by University of Cincinnati officer Ray Tensing.

That’s not to save Berry’s efforts at achieving equal opportunities and racial reconciliation went for naught. It just means there’s a lot more work to be done.