From The Vault: Marvin Lewis era with Bengals began with a splash 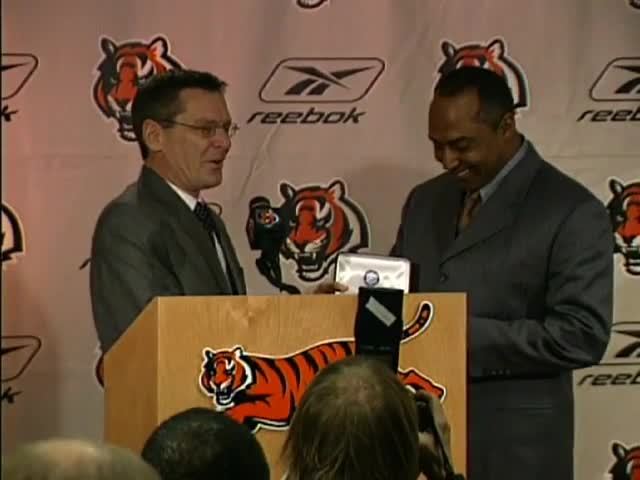 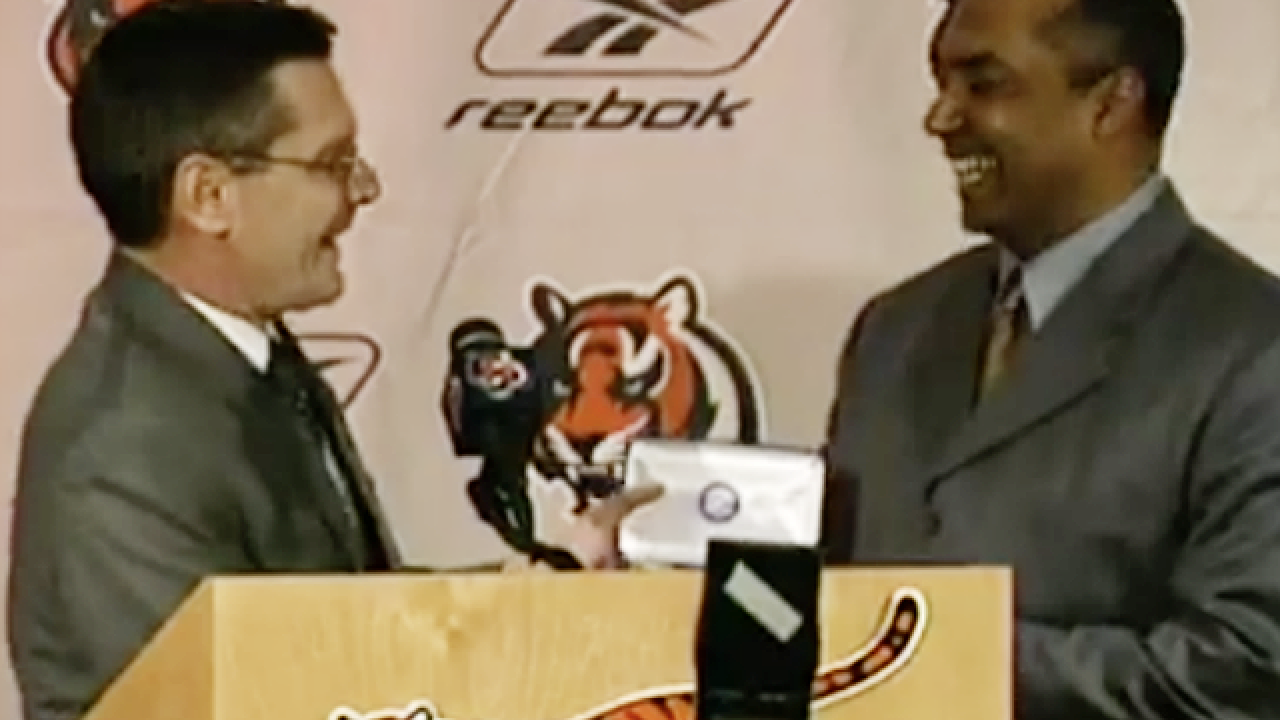 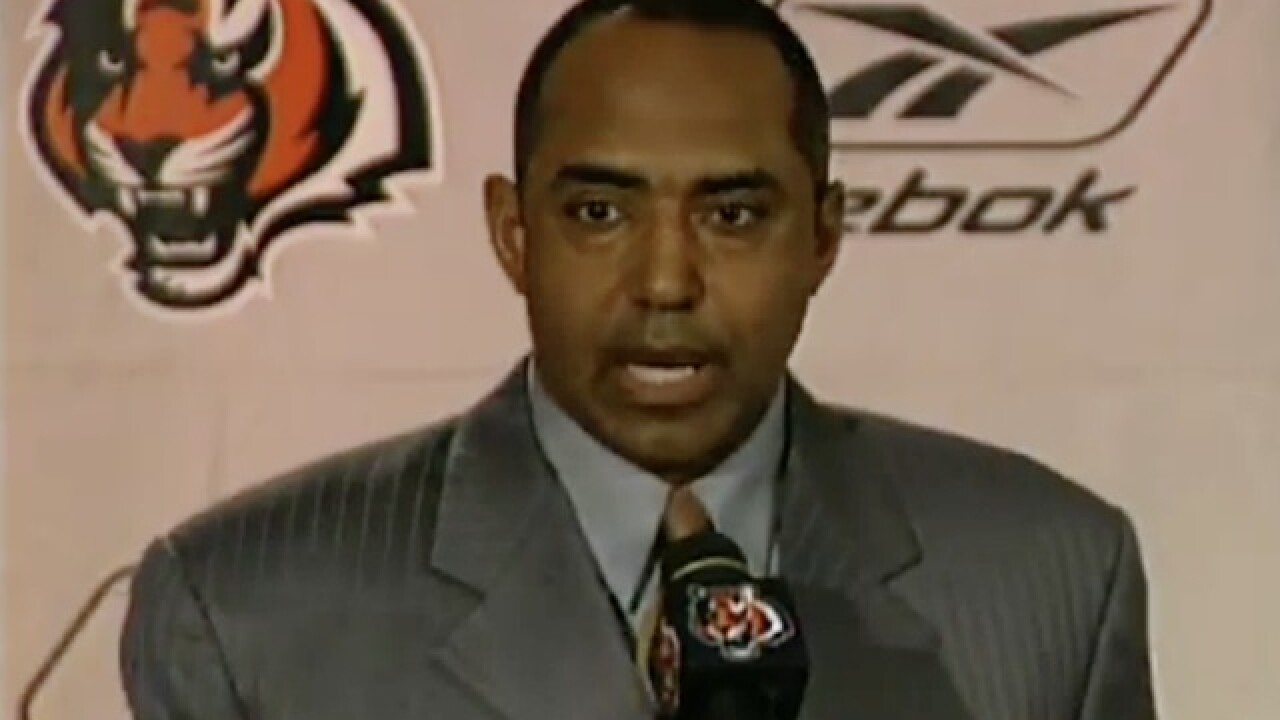 WATCH Mayor Charlie Luken give Marvin Lewis the key to the city in the video player above.

CINCINNATI – Sixteen years ago, the Marvin Lewis Era in Cincinnati began with a splash.

It was Jan. 14, 2003 and the Bengals braintrust – President Mike Brown, his daughter Katie Blackburn and her husband Troy Blackburn -  had decided to hire the Redskins defensive coordinator as their new head coach after multiple interviews with a handful of candidates.

But they were having trouble getting in touch with Lewis on his cell phone, according to an Enquirer story at the time. They didn’t know that Lewis had dropped his cell phone in the toilet.

Three days later, Cincinnati welcomed Lewis to town with the fanfare usually reserved for a war hero come to liberate a city - in this case, a city and its football team from its losing ways.

Mayor Charlie Luken came to the podium to greet Lewis and gave him the ceremonial key to the city.

“It opens the vault, but the vault is empty, “ Luken said, alluding to the fact that the Bengals hadn’t been in the playoffs or had a winning record since the 1990 season.

Luken got a laugh, and so did Lewis when he thanked Luken and said: “I hope that key works again a year from now.”

Lewis’s hiring proved to be one of the biggest moments in Bengals' history because he turned the floundering franchise from a national laughingstock to a contender.

Every Bengals fans knows how bad they were in the  “Lost Decade” before Lewis took over. In 2003, the Bengals were coming off their worst season ever -  2-14 - and had fired Dick LeBeau, who was 12-33 in three dreadful years as head coach.

Brown was so desperate for a winner that he broke family tradition and looked outside the organization for a new coach. He narrowed his list to three finalists:

Brown held multiple interviews with all three coaches, ending with Mularkey in Mobile, Alabama, on Monday night, Jan. 13. The next day, Brown and Lewis met in a Mobile hotel and quickly agreed on a five-year contract at $1.5 million per.

Why not meet in Cincinnati?

Lewis, Mularkey and other NFL coaches were in Mobile to scout college players practicing for the Senior Bowl the following weekend. Brown wanted to keep the hiring a secret until the Bengals could announce it in Cincinnati, but the word got out.

“We’re turning over a new leaf,” Brown said at a hastily arranged news conference in Mobile that night.

That was an understatement.

It was an historic hire for the Bengals – the first African-American head coach in the team’s history, and only the eighth in the NFL. Coming two year after the riots, Lewis's hiring was praised by Rev. Damon Lynch II, former federal court judge Nathaniel Jones and other Cincinnati black leaders.

“It’s a good hiring, and the Bengals should be commended because he’s a quality head coach and not just because he’s African-American,” said tackle Willie Anderson.

“Of the three (coaches the Bengals) were talking about, I really thought he was the best choice all along because I think Marvin is going to command respect right away,”  QB Jon Kitna said.

After hiring Lewis, Brown changed the way he ran the team - to a degree. Brown stepped into the shadows and allowed his coach to be the face and voice of the franchise. Brown also ceded some control over coaching and personnel decisions to Lewis, but not as much as Lewis would like apparently, since Lewis almost quit in 2010 and again in 2016.

Standing at the Paul Brown Stadium podium in 2003,  Lewis flashed the Super Bowl ring he won as Ravens defensive coordinator in 2000 and immediately started to chip away at the angst of the long-suffering players and fans.

“What I’m going to hammer home to our guys is, we’re not that far away,” Lewis said.

He said he was going to build a professional attitude and organization.

“That’s what we need around here. Guys have to learn to be professional,” Kitna said.

Lewis even dared to suggest that the Bengals could get back to the Super Bowl for the first time since the 1980s.

“Why we do this is to win championships,” Lewis said.

Over the past 16 years, Lewis has coached the Bengals to some of the franchise’s biggest successes and most disappointing failures.

Lewis got a new two-year contract after the 2017 season, giving him two more chances to win a playoff game and get the Bengals to the Super Bowl. But after a 6-10 record in 2018 - the Bengals' third straight losing season - Brown fired him with one year left on his contract.

As for the coaches the Bengals passed up: