From homeless camps to United Way: Nine impactful stories of hardship and hope from 2018 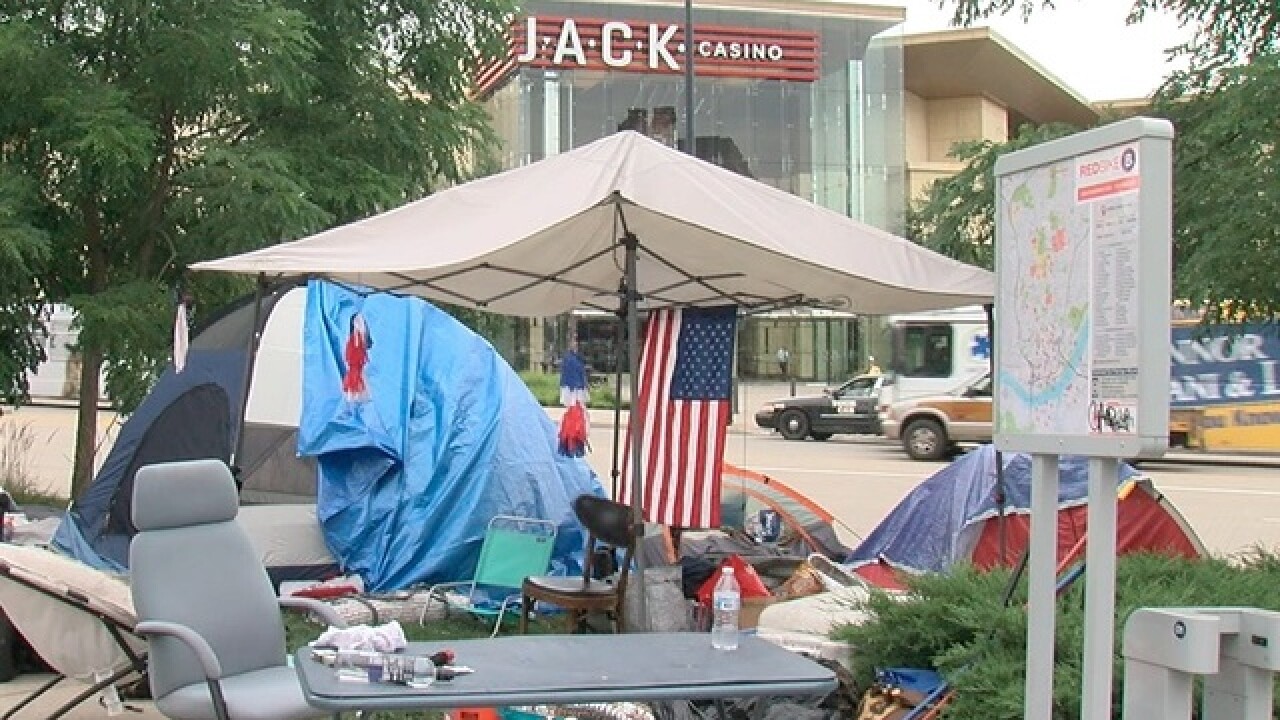 CINCINNATI -- Greater Cincinnati’s neighbors in need and the organizations that work to help them were in the spotlight throughout 2018.

From homeless encampments Downtown to the turmoil at United Way of Greater Cincinnati, the region got an up-close look at poverty and how difficult it can be to help families lift themselves out of it.

Here are nine of WCPO’s most impactful stories of hope and hardship from the past year.

Homeless encampments on Downtown Cincinnati sidewalks and under highway overpasses dominated the news this past summer.

The result was a lawsuit that grew into a ban against sleeping outside in Hamilton County as long as area homeless shelters have space available.

Some people who were living in the tents got housing while others remain homeless but in hiding.

Lawsuits related to the actions of the city and county continue to work their way through the courts.

Residents there had reached out to WCPO with concerns about the conditions in the building, which is owned and managed by Cincinnati Metropolitan Housing Authority, or CMHA.

CMHA made some repairs after WCPO’s reporting.

But extensive city inspections of the building found scores of code violations.

WCPO’s most recent story reported that most of those code violations had been fixed, but the building’s aging elevators were breaking down repeatedly.

A study conducted as part of The Cincinnati Project at the University of Cincinnati showed how prevalent evictions are in Cincinnati and Hamilton County and which communities have been hit hardest.

Conducted at the request of the Legal Aid Society of Southwest Ohio and Housing Opportunities Made Equal, the study found Hamilton County had nearly 50,000 eviction filings from 2014 through 2017, for an average of more than 230 a week.

The court decided less than 1 percent of eviction filings in favor of tenants. And neighborhoods with the highest eviction rates also tended to have the highest rates of poverty and heaviest rent burdens.

Legal Aid and HOME are urging city and county leaders to adopt changes to reduce the number of evictions for the sake of tenants, landlords and communities.

A University of Cincinnati study on court fees was the subject of another 9 On Your Side report.

An assistant professor of criminology at UC’s College of Criminal Justice is leading a multi-state study to examine how high court costs and fees impact people on probation and parole.

RELATED: Study looks at impact of court fees on parolees

The study will examine factors such as the amount of court costs, racial and income disparities and the ability of some defendants to pay.

Researchers also want to examine how families are impacted.

A looming child care deadline could have a devastating impact on thousands of Southwest Ohio families.

Ohio child care providers have until June 30, 2020 to get at least a one-star rating in the state’s Step Up to Quality program.

After that date, providers that have failed to get a star rating won’t be allowed to serve families that receive Ohio child care subsidies.

As of November, the region had nearly 800 programs that still needed to be rated so they could continue to serve the more than 11,000 children that depend on them.

The nonprofit organization 4C for Children has expanded its training to providers, even offering classes on evenings and weekends, to try to help them get certified.

CityLink Center has a different kind of help for low-income families.

The new Findlay Culinary Training Program launched in 2018 for adults who want to get the skills they need to build a career in the restaurant industry.

It isn’t the only free program in town to help local residents develop cooking skills. What sets is apart is a 12-week paid internship at Social OTR, a real restaurant that will be serving paying customers.

Social OTR is scheduled to open near Findlay Market in early 2019.

By that point, the Findlay Culinary Training Program will have a number of students who have completed the classroom portion of their training and will be working at the restaurant.

The power of Mo

There are many people across Greater Cincinnati creating their own ways to help themselves and their neighbors.

Moneaca Collins is one of them.

WCPO reported on Collins and the work she has been doing on behalf of the residents of Winton Terrace, a sprawling public housing development of more than 600 units that is owned and managed by CMHA.

RELATED: This Winton Terrace mom is all about tough love

Ms. Mo, as she is better known, believes in accountability both on the part of CMHA and on the residents of public housing.

She moved out of Winton Terrace in November, less than two months after WCPO’s coverage, after her own townhouse became infested with mice.

Now she lives in Findlater Gardens, a nearby CMHA property, and is working on a new way to give voice to residents of both public housing developments.

How a tricked-out RV fights poverty

A growing number of families living in poverty call the suburbs home, and suburban communities often have fewer resources available to help low-income parents and their children.

RELATED: As suburban poverty grows, this RV hopes to help

Started in 2016, NEST takes its educational services directly to families using an old RV that has been retrofitted into a classroom on wheels.

DeVol and her trained volunteers help students ranging in age from preschool to high school with everything from basic reading to higher-level math.

DeVol argues that teachers in suburban schools are often ill equipped to deal with the challenges their low-income students face.

NEST aims to ensure that all students get the support they need to be successful in school, which DeVol argues is the first step they must take to work their way out of poverty.

The more than 140 local nonprofits that get funding from United Way of Cincinnati serve 300,000 families throughout the Tri-State each year.

But 2018 turned out to be a year of unexpected struggles for United Way.

The organization’s first-ever black CEO stepped down in October after less than four months on the job. Michael Johnson alleged he had been the victim of “subtle threats” from the business leader who served as the chair of United Way’s board.

The board chair resigned after members of United Way’s own staff called on her to leave her role.

The controversy erupted just weeks before the end of the organization’s annual fundraising campaign, which ended up raising millions of dollars less than in previous years.

The nonprofits that rely on that money to serve families throughout Greater Cincinnati are bracing for funding cuts.

Interim CEO Ross Meyer has said United Way will work to raise every possible dollar through the end of the year, but uncertainty remains.

People on the front lines of fighting poverty are sure of this much: Greater Cincinnati has a lot of work ahead to reduce poverty in the region, and it’s a job that will take more than a year or two -- or even 10 -- to complete.