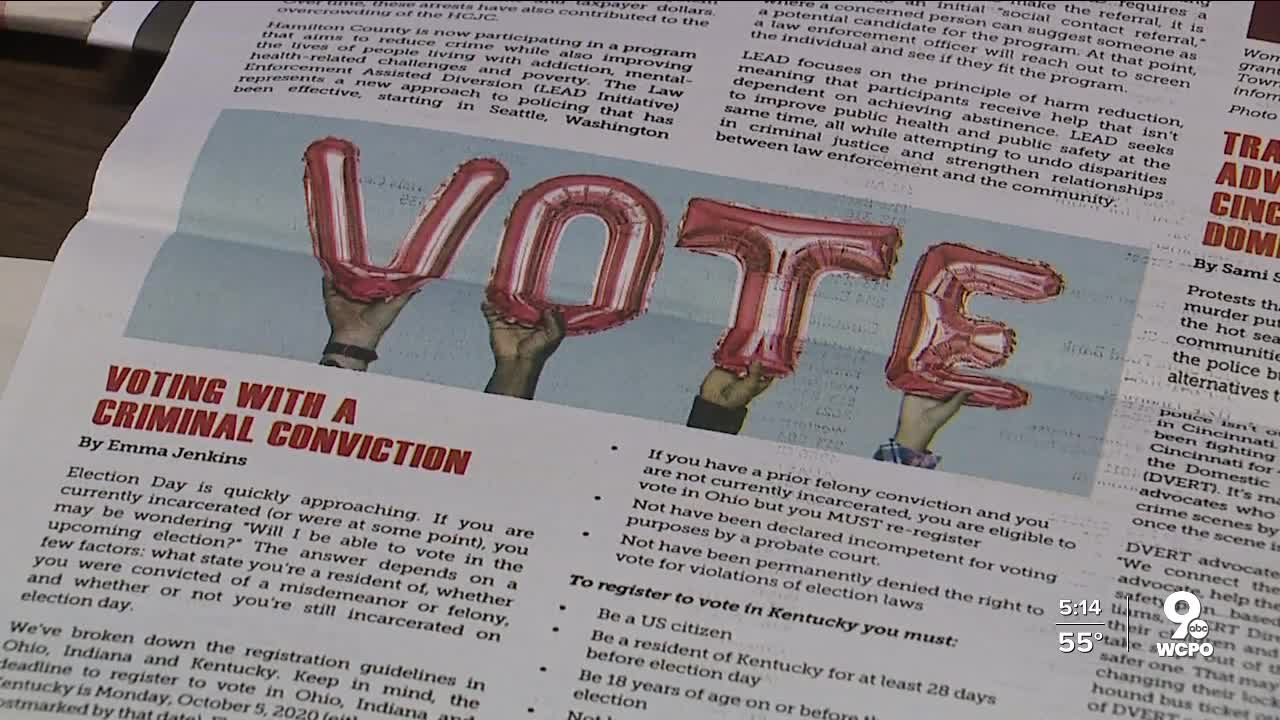 RISE is a free newspaper filled with resources for incarcerated people. The latest issue explains voting rights in Ohio, Kentucky and Indiana. 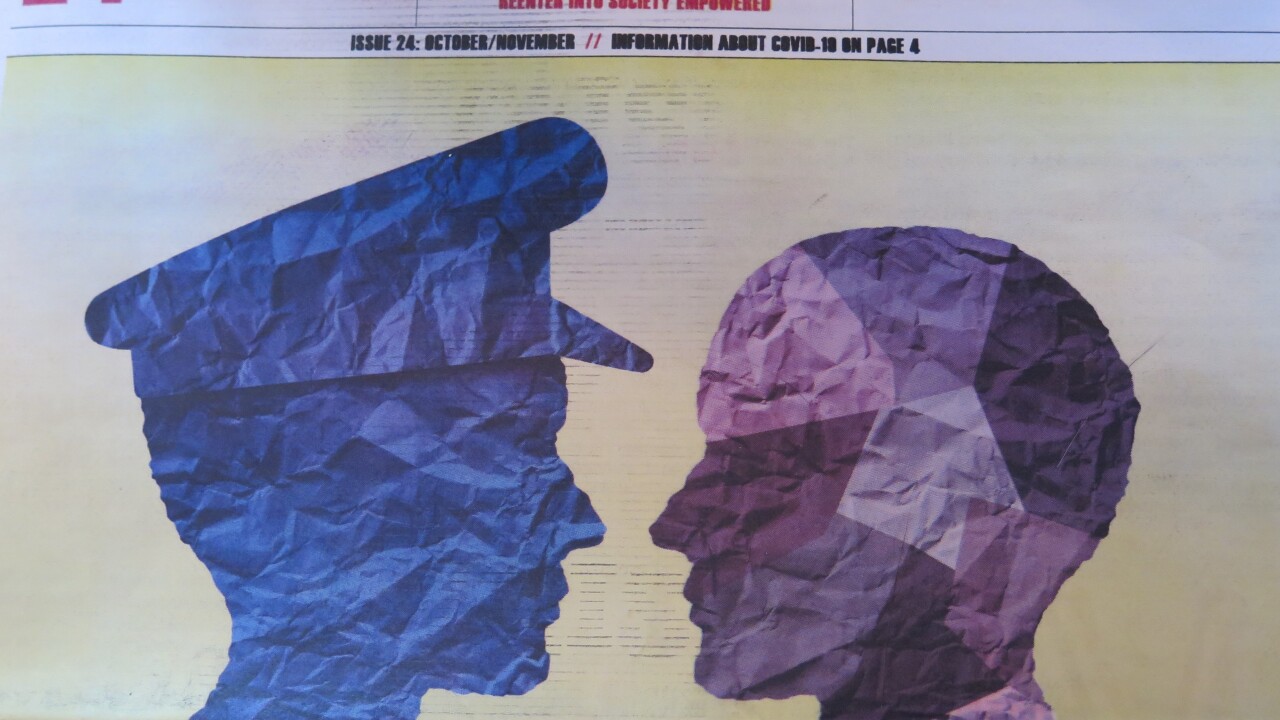 CINCINNATI — Tracy Brumfield knows how difficult it can be for people to find the resources they need when they leave incarceration.

She faced the struggle herself after leaving prison in 2013 for drug charges stemming from her opioid addiction.

That’s why Brumfield created RISE, for Reenter Into Society Empowered. It’s a free newspaper distributed in detention centers to give its readers the information and hope they need to live successfully after leaving incarceration. Her nonprofit organization Rise Up News produces the paper six times per year.

“RISE came about from my own experience,” said Brumfield, executive director of Rise Up News. “In our urban core, we release on average 100 people a day that go back into our community with no resources, no access to public transportation. If I had a job when I went in – the average stay is 39 days – chances are I don’t have it when I come out.”

RISE has covered recovery, employment, health care and housing. This year’s October/November issue is especially timely: It explains voting rights for people currently behind bars and those who have been released as well as how the laws differ in Ohio, Kentucky and Indiana.

“A misconception that a lot of people have is that just because they have a conviction, that that automatically nulls their right to vote,” said Kimberly Elliott, a member of the American Civil Liberties Union of Southwest Ohio’s action team focused on voter rights.

The paper spells it out clearly:

· In Ohio, people who are currently incarcerated for a felony conviction can’t vote. But Ohio residents with prior felony convictions can vote if they re-registered after their release as long as they were not declared incompetent for voting purposes by a probate court or were not permanently denied the right to vote for violations of election laws.

· In Kentucky, residents with a felony conviction can vote if their civil rights were restored by an executive pardon. People cannot vote if they have been judged “mentally incompetent” in a court of law or if they claim the right to vote elsewhere.

· And in Indiana, residents cannot vote if they are currently incarcerated for a criminal conviction.

The goal is to get copies of RISE to those who need it most.

‘Our voice, our vote’

What RISE provides in its latest issue is even better than helpful, said Tyra Patterson, a community outreach strategy specialist at Ohio Justice and Policy Center. Patterson spent 23 years incarcerated for murder and robbery – crimes she did not commit – before she left prison a free woman on Christmas Day 2017.

Understanding voting rights and how to exercise them is critically important for people who have experienced the criminal justice system firsthand, she said.

“Much of the inequity and injustice in the world is driven by policy. How can people make policy on something they haven’t experienced?” Patterson said. “There are so many injustices in the world. I would love, love, love if we could legislate hearts. But the truth is we can’t. Policies put in place measures so people can get the support they need, and that’s voting.”

Making sure that incarcerated people know their rights and how to vote also is critical because of the way the criminal justice system affects some communities so much more than others, said Elliott, who added that her role as executive director of The Four-Seven prison ministry has made her passionate about her volunteer work with the ACLU and voting.

“We live during a time where over 10 million people that are African American – and that’s roughly 8% of our population – either have or have had some interaction with the criminal justice system. And so if they believe that that prohibits them from voting, that’s 8% of our population as opposed to about 2% of those that are non-African American,” Elliott said. “We want to avoid that, and we need to make sure that we have the right information out there.”

While the 2020 presidential election is dominating the news, there are important local races that directly impact the criminal justice system, Brumfield said, such as the Hamilton County Sheriff election and more than a dozen Common Pleas Court judge races.

The latest edition of RISE marks the 24th since the paper launched in 2017, and Brumfield brings the same passion to each one, said Donna Mayerson. She’s a Cincinnati psychologist and a trustee of the Manuel D. & Rhoda Mayerson Foundation, which supports Rise Up News.

“Her personal experience has really informed her ability to sort of see the big picture and have perspective around some of the flaws in the system and how we treat people,” Mayerson said. “She was a person who felt like she’s kind of been a throwaway person in the world, that her pain and agony and struggles had finally sort of pushed her to sort of a point in which she was desperately looking for help and not in a position of finding it.”

That perspective makes Brumfield even more determined, Mayerson said, to offer hope and help to the incarcerated people who read RISE.

The paper is popular at the Hamilton County Justice Center, where it can be requested as a free commissary item; Brumfield said 4,000 copies of RISE were distributed there in 2019.

“I think it gives hope to the inmates. They can see that there’s light at the end of that tunnel and that they do have a chance,” Ems said. “When the commissary runs out, I get grievances. So it obviously must be important to them.”

It’s definitely important to Brumfield, who has been in recovery since 2014. She and her team worked with a Mount Saint Joseph University class to develop branding for a youth edition of the paper that she hopes to launch if she can secure funding. And she has gotten funding to produce video stories that can be aired on television screens at correctional facilities to expand the reach of RISE.

Brumfield had to scale back community distribution this year because of the COVID-19 crisis, she said, but she dreams of seeing RISE expand its reach if she can secure enough money to make it happen.

“My greatest hope,” she said, “is that I get to continue to do this for as long as I have left on this planet.”

More information about RISE and the nonprofit Rise Up News is available online.

More information also is available online about voting rights for people who are, or who have been, incarcerated.