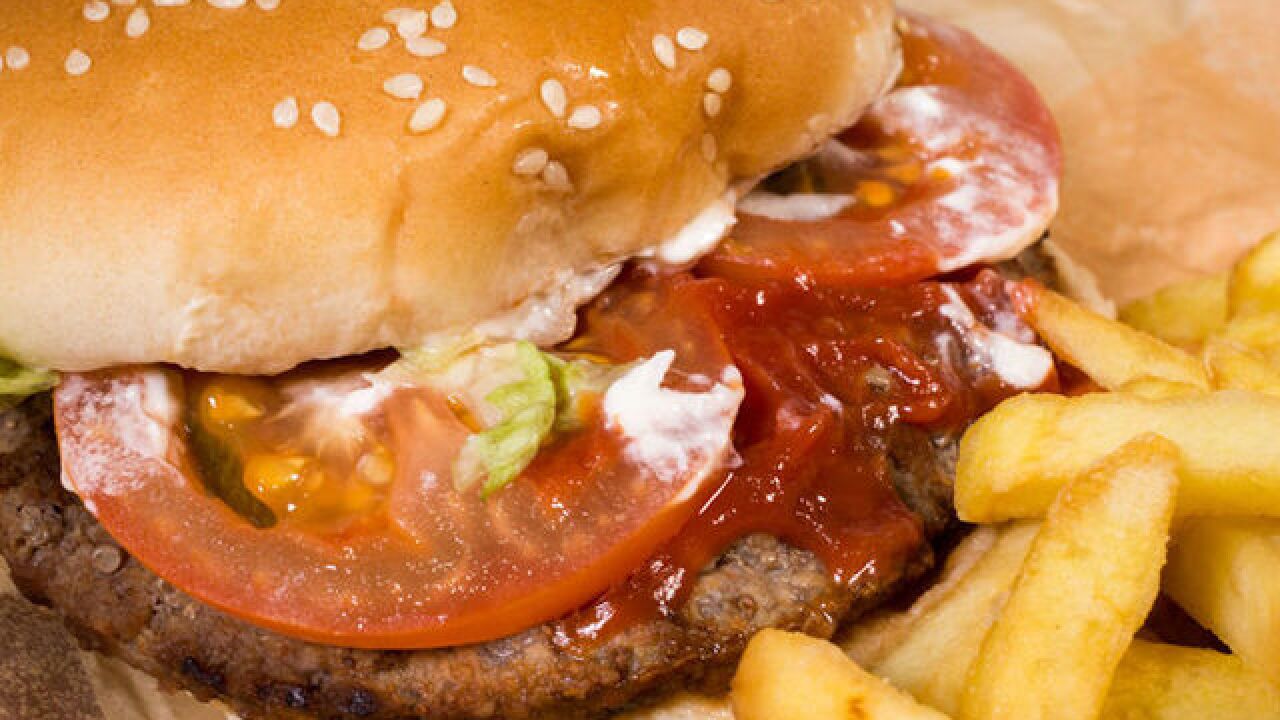 Image copyright 2018 Getty Images. All rights reserved. This material may not be published, broadcast, rewritten, or redistributed.
Matt Cardy
<p>In this photo illustration, fast food from a branch of Burger King is pictured on February 20, 2018 in Bristol, England. </p>

You probably already know that junk food, though delicious, is bad for you. It can have negative health effects such as increasing your risk of heart disease, metabolic disease and even cancer. Now, researchers have used a new nutritional labeling system to tie a diet low in nutritional quality with increased risks of a number of types of cancers.

The Nutri-Score logo is based on the British Food Standards Agency's Nutrient Profiling System , which is calculated for each food or beverage using a 100-gram content measure for energy (calories), sugar, saturated fatty acids, sodium, fiber and proteins. The profiling system has been used in the UK to regulate food advertising to children since 2007.

Simple though it may be, the Nutri-Score system has not been adopted by the European Union or any other nations, according to Mélanie Deschasaux and Mathilde Touvier, authors of a new study on the system and members of the Nutritional Epidemiology Research Team in the Epidemiology and Statistics Research Centre at Université Sorbonne Paris Cité.

"The Nutri-Score has received the official support of health authorities in France and more recently in Belgium. However, its application cannot be mandatory because of the European Union labelling regulations," Deschasaux and Touvier explained in an email. However, 33 food manufacturers and companies, including Danone, Fleury Michon and McCain, have begun to voluntarily adopt the system.

This EU review and debate process is expected to come later in the year, with adoption and implementation of a standard nutritional labeling system for all EU countries "expected to follow," according to the authors: "Similar discussions are also ongoing in North and South America, Canada, and Australia."

The aim of the new study , published Tuesday in the journal PLOS Medicine, was to provide scientific evidence of the value of the British Food Standards Agency system as an underlying basis for the Nutri-Score system, Deschasaux and Touvier said.

The researchers examined the diets of 471,495 adults from 10 European countries through the Nutri-Score lens. They used the British Nutrient Profiling System to calculate a Nutri-Score for the usual diet -- the self-reported foods and beverages commonly eaten -- of each participant.

A total score reflecting a lower-nutritional-quality diet was associated with a higher risk of total cancer: Cancer rates among those with the highest junk food scores were 81.4 cases per 10,000 person years (separately, the rate for men was 115.9 and for women, 66.6), versus 69.5 cases per 10,000 person years (89.6 for men and 61.1 for women) among those with the lowest junk food scores. (Person years is an estimate of time for all the participants in the study that allows researchers to measure cancer risk regardless of how long a person remained in the study due to death or other factors.)

Because people who eat junk food might be overweight or do little exercise, and both of those qualities are linked to cancer, might the study's finding be a result of other factors and not diet alone?

"These analyses were adjusted for other individual characteristics that could 'confound' the nutrition-cancer association such as physical activity and BMI but also educational level, smoking status, alcohol use or family history of cancer," Deschasaux and Touvier said. The adjusted result allowed the researchers to conclude that "a lower inherent nutritional quality of the food consumed was associated to a higher risk of developing a cancer."

"Overall, this adds support to the relevance of using [the British nutritional system] as an underlying nutrient profiling system for the simplified nutrition label Nutri-Score," Deschasaux and Touvier wrote.

'Protective' effects of a good diet

Gerardo G. Mackenzie, an assistant professor in the Department of Nutrition at the University of California, Davis, said one of the virtues of the new study is the large number of participants. Finding, once again in a study of many people, that eating junk food increases cancer risk substantiates all of the past research saying the same.

"Each one of these recommendations has been shown to have a beneficial protective effect," Mackenzie said. "It is not a single one that will provide the benefit but several of them" as a whole.

Mackenzie added that more research is needed to precisely understand the ways in which high body mass, low physical activity and too much alcohol can counteract a good diet.

Deschasaux and Touvier concluded, "The association between nutrition and cancer (as well as other chronic diseases) is not new." Though there are other risk factors, nutrition ranks among the most important, because it "can be modified at the individual level and be targeted by public health policies."