'Dead Serious ... About Life' to be performed at Fairfield Freshman School 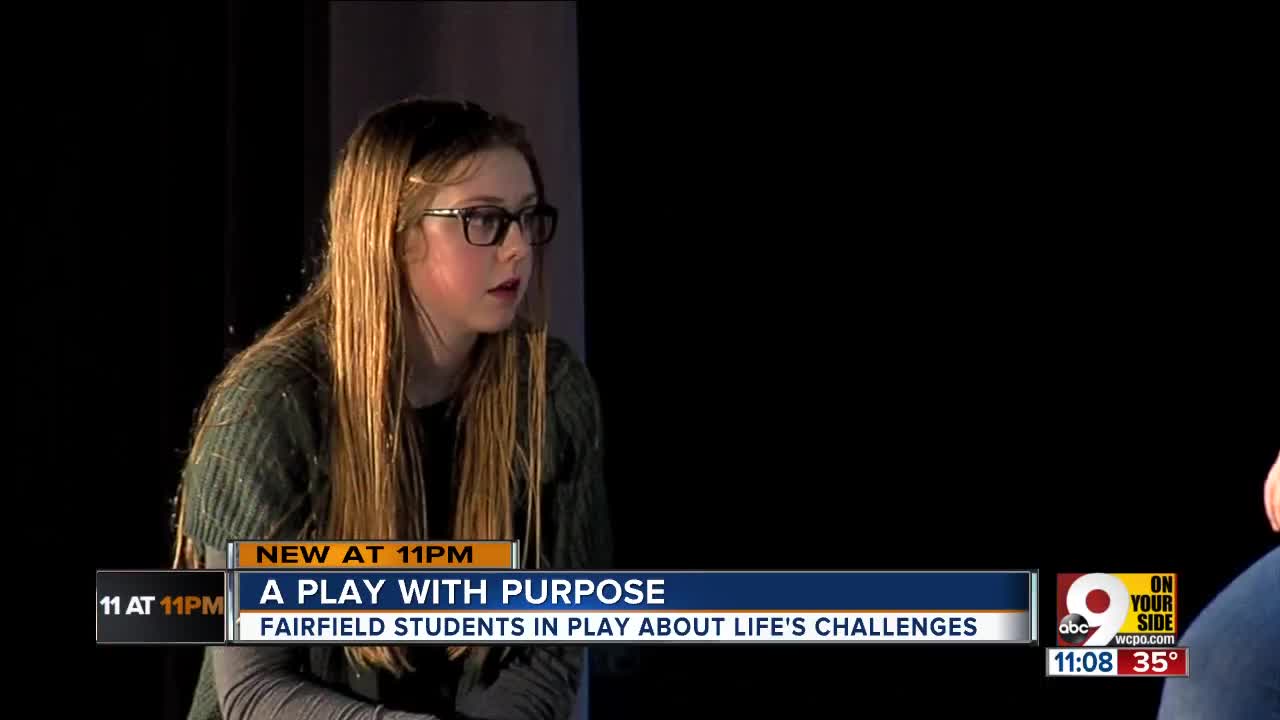 Terri Hopton launched her first production of “Dead Serious … About Life” as a way to communicate with teens about some of the most serious issues they face.

MASON, Ohio — Terri Hopton launched her first production of “Dead Serious … About Life” as a way to communicate with teens about some of the most serious issues they face.

Her Mason-based nonprofit organization has kept the show going for nearly 30 years because of the impact it has.

There was the time in Northern Kentucky where a girl pulled a loaded gun out of her purse after a performance, put it on a table and said, “I won’t be needing this.”

Another girl went to the police after seeing a performance at Piqua High School to report that she was being sexually molested. The police called Hopton to let her know the impact the production had and assure her they were going to go after the girl’s abuser.

“If we can save one kid’s life, if we can help direct one kid in a different direction, then it’s way worth it,” said Hopton, whose nonprofit is called Mishpachah, a word that means “family” in Hebrew.

Hopton’s teenage cast will be performing “Dead Serious … About Life” at Fairfield Freshman School on March 8 and March 9.

The show addresses issues ranging from drug use and bullying to teen pregnancy and suicide. One of the characters dies by suicide in the production, which Hopton said is designed to be as raw and realistic as possible.

Fairfield City Schools has been working to ensure students have all the mental health resources they need and made suicide prevention the topic of its mental health series last year, said Gina Gentry-Fletcher, the district’s school and community relations director.

The district has welcomed the production of “Dead Serious … About Life” and has made parents aware of it, she said.

“I do applaud that group for what they’re doing,” Gentry-Fletcher said. “The message is intense, but the topic is intense.”

As intense as the production is, it does offer hope, Hopton said.

“People ask me all the time, what’s the difference between what you do versus ’13 Reasons Why?’” Hopton said, referring to the controversial Netflix series about teen suicide. “The difference is we give hope. We give you the answers. This is what you do to change your life.”

That message of hope is one of the big reasons Jake Anderson likes being part of the cast, he said.

Anderson is a junior at Deer Park High School and joined the production when he was in eighth grade. He has played different characters over the years, including the young man in the show who dies by suicide.

“Just stepping into that point of view as someone who’s struggling with something, it really lets me reach out to people who are struggling with the same thing,” he said. “It’s just a great outreach, and anyone should feel free to reach back.”

Sami Bruton is a junior at Scarlet Oaks in Sharonville and is in her third year as a cast member. She originally got involved to try something new and make new friends, she said, but the experience has become much more than that.

"It totally transformed my relationship with God, and my parents and everybody," she said. "The whole entire production makes me happy. It's really life-changing."

Mishpachah provides complimentary tickets to schools for each performance, Hopton said, so that school counselors can distribute them to students they believe would benefit from the show.

She recommends the show for students from sixth- through 12th-grade.

“I have adults who come to the show and are like, ‘That’s what my kid’s dealing with?’” Hopton said. “So it’s very eye-opening to parents as well.”

The teenage performers in the show audition for Hopton each year, she said. To keep the nearly 30-year-old production current and relevant, Hopton said she reviews the script annually with her young performers.

When cutting started to become a big problem 20 years ago, for example, she created a character that struggles with cutting.

She eliminated a gangster-type character four years ago when her performers told her he was outdated.

And the drug that one of the characters abuses has changed with the times, too. The current performances include references to heroin, Hopton said.

“It’s great to have help groups and stuff in the schools,” she said. “But the beauty of what we’re doing is it’s students talking to other students because it’s high school students on stage, sharing. It’s not a bunch of adults.”

The goal is for students to leave the performance armed with information about what to do if they need help, whether that means talking with a school counselor or the police or their parents.

“We say ‘Dead Serious … About Life’ will make you take a second look at your life,” Hopton said.

More information about “Dead Serious … About Life” is available online. Tickets for the Fairfield performance can be purchased for $6 online up until 5 p.m. March 7. Tickets for $7 will be available for purchase at the door.