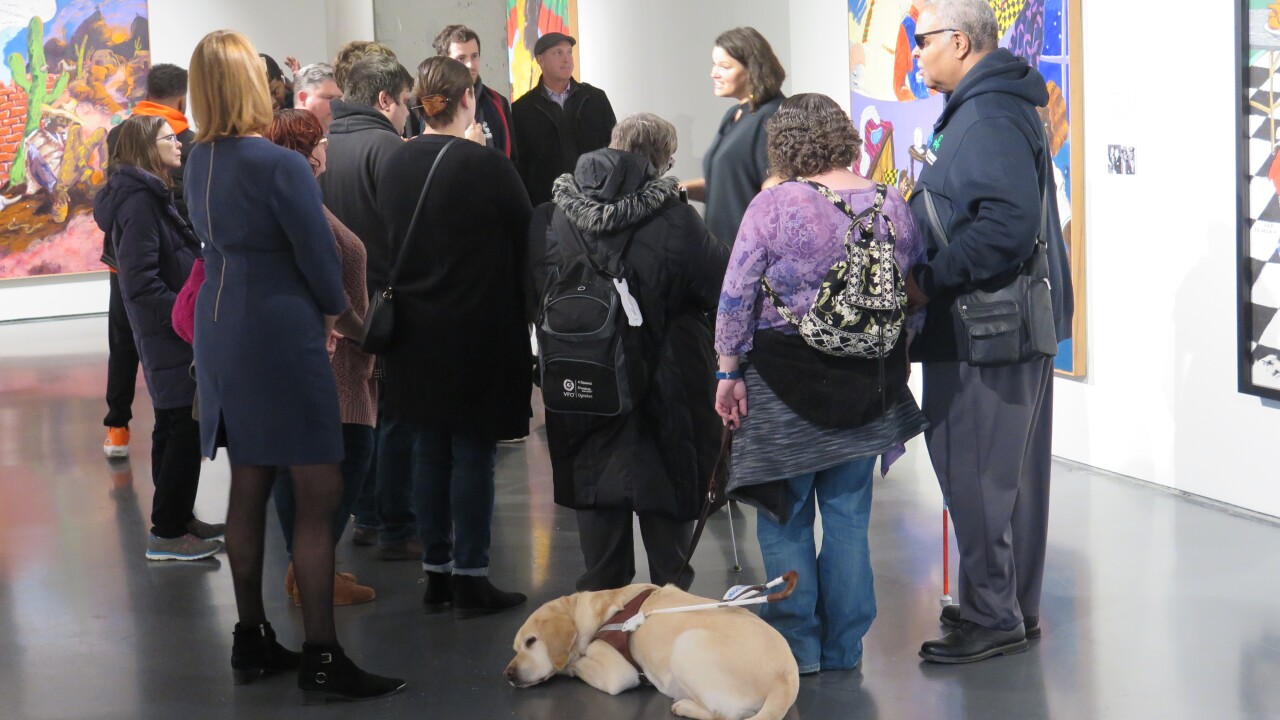 Lucy May | WCPO
A group from the Clovernook Center for the Blind &amp; Visually Impaired tours an accessible exhibit at the Contemporary Arts Center. 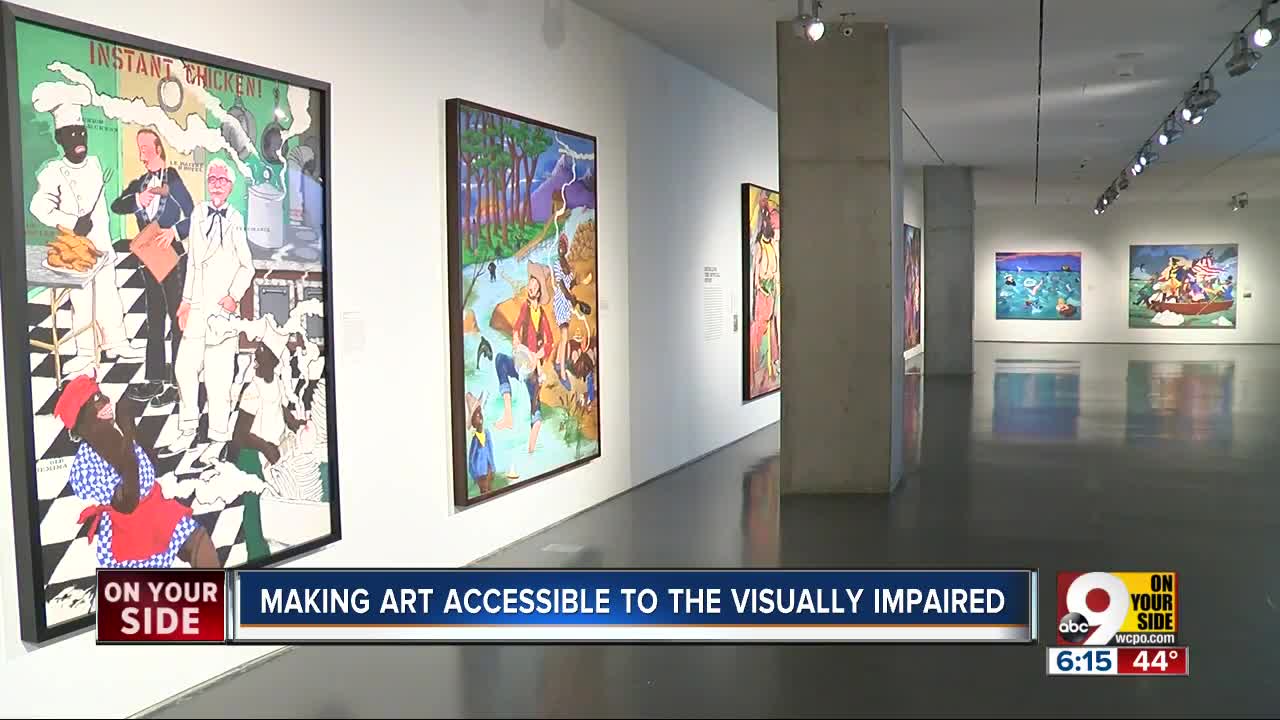 CINCINNATI — The painting called “The Bilingual Cop” covers most of a gallery wall at the Contemporary Arts Center Downtown.

It portrays a law enforcement officer with a gun in one hand and baton in the other. He spews racial slurs in both English and Spanish at two dark-skinned men sitting in the foreground of the canvas with pink clouds swirling below their feet.

Kim McEachirn stood before artist Robert Colescott’s painting and soaked it in before speaking.

“Underneath all the guns, the bullets, all he’s got to protect himself and society, are those prejudices underneath,” McEachirn said. “It’s like no matter what the clouds tell you about the historic background of the Mexicans and the blacks, there’s the here and now of prejudice.”

It’s the kind of thoughtful discussion that Contemporary Arts Center staff members hoped to hear as people take in the exhibit “Art and Race Matters: The Career of Robert Colescott.”

What stood out about McEachirn’s comments is that he’s blind. He can’t actually see “The Bilingual Cop” or any of Colescott’s paintings.

But he still could experience the exhibit using braille text and audio recordings that Clovernook Center for the Blind & Visually Impaired recently completed for the exhibit.

The accessibility project is part of Clovernook Center’s Arts & Accessibility Partnership Initiative, funded by a $25,000 grant from the Louise Taft Semple Foundation.

The cost of providing accessible materials has stopped museums from acting on that will in the past, Foulkes said. The grant has allowed Clovernook Center to provide accessible materials to 10 cultural institutions locally and nationally at no cost to the museums themselves.

“We were extremely lucky to get connected with Sam and Clovernook to really just investigate what we could do for people who are blind and low vision,” said Shawnee Turner, the Contemporary Arts Center’s associate educator of school and docent programs and the accessibility co-coordinator.

The Contemporary Arts Center also has an American Sign Language video tour of the exhibit available on its website, she said.

“The first line of our mission is art and the creative process belongs to all people,” Turner said. “Just to make sure that everyone who walks through our doors feels welcome and accommodated and just feeling as if they have access is very important to us.”

Getting the accessible materials right is important to Clovernook Center.

That’s why the organization uses inclusive design in the work, Foulkes said, involving employees who are blind or visually impaired to develop, proofread and refine the materials.

‘I almost cried a few times’

“Often we’ll do the same thing eight, nine, 10 times and survey a group of people who are blind or low vision to provide feedback on what would work best for them in a museum setting,” he said.

David Grimes is a corrector and quality assurance coordinator at Clovernook Center who was involved in making sure the descriptions of the artwork in the exhibit were accurate and meaningful.

“They did just a smash-up job, so we didn’t have to edit too much of it,” said Grimes, who is blind. “Especially with the braille, we want it to be looking good, we want it to be in the right code, we want it to be proofread so it looks great for anybody that reads it. We just want to put out a good product because we’re the end users, and if it’s not good it’s going to look bad on us.”

Grimes and McEachirn both were part of a recent tour that Turner led so that Clovernook Center employees could experience the exhibit.

“She gave us a wonderful explanation of the history and some of the paintings and then you hear the descriptions,” Grimes said. “It all just fell into place. And you could feel like you were in the picture itself.”

“That’s what’s so very important for a sighted person. When you look at something, you can imagine yourself being closer into that,” said McEachirn, who lost vision in his left eye shortly after birth and eventually lost vision in his right eye, too.

“As a blind person, when you read the information about the painting or when you hear the audio description, everything is getting to your ears and getting to your brain with the information that you feel with your fingers," he said. "You can get an intimate experience with the painting that you just can’t get from someone standing next to you saying, ‘Here’s this painting. This is what it looks like.’”

Turner said she was thrilled with the response.

“I almost cried a few times,” she said. “It was really beautiful to really hear the depth at which they were really thinking through the pieces and understanding it and feeling it, and honestly that’s what I’ve wanted out of the experience.”

The accessible materials created by Clovernook will travel across the country with the exhibit in 2020 and 2021. Other institutions involved in Clovernook Center’s Arts & Accessibility Partnership include Carnegie Hall in New York City, the National Veterans Memorial and Museum in Columbus, Cincinnati Art Museum, Cincinnati Museum Center, Cincinnati Zoo & Botanical Garden, the Massillon Museum, the Metropolitan Museum of Art in New York City, TILT Performance Group in Austin, Texas, and the Western Wildlife Corridor.

Information about the Contemporary Arts Center and its exhibit “Art and Race Matters: The Career of Robert Colescott” is available online.

Information about Clovernook Center for the Blind and Visually Impaired is online, too.