'She's someone who truly was a hero' 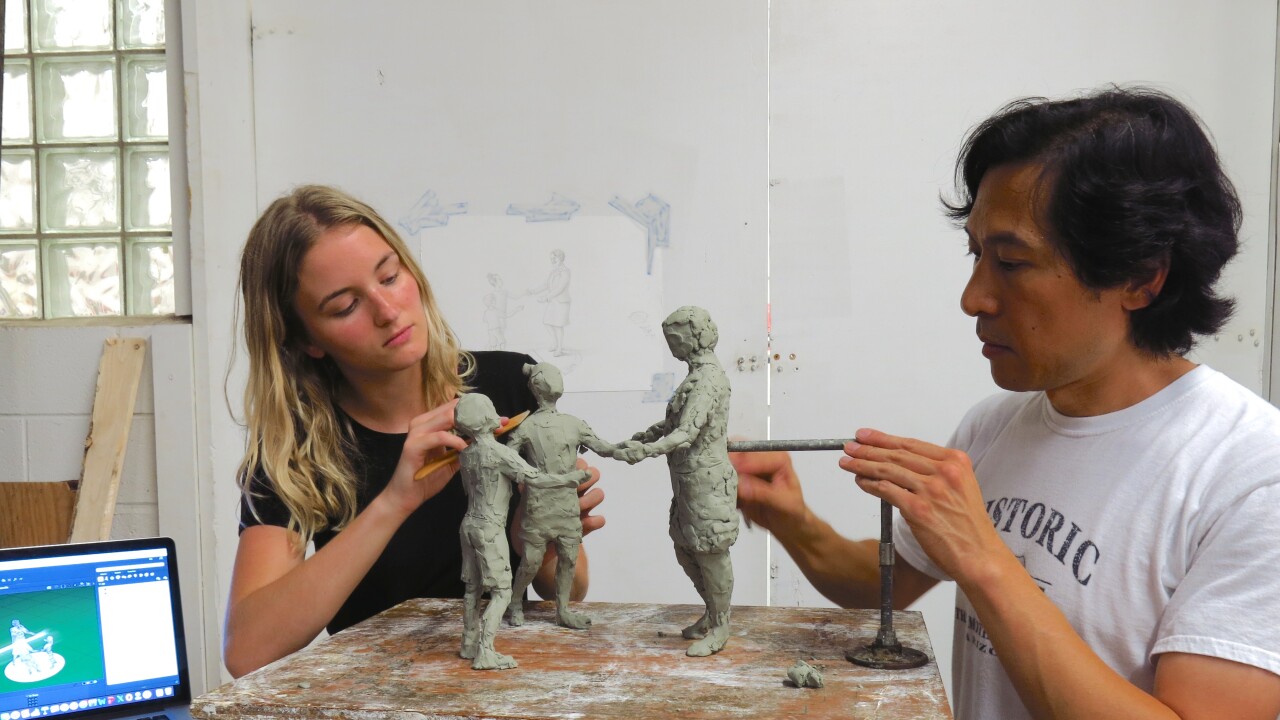 CINCINNATI — For years, Alice Schneider has noticed the dozens of statues of famous men throughout the city of Cincinnati, and she couldn’t help but wonder.

“Where are the statues of people who stand for justice and love and good work?” Schneider said. “So I got on the internet in May. And I looked for the statues that are around Cincinnati, and there were none of a named woman.”

Cincinnati has the Genius of Water on Fountain Square, of course, and other mythical depictions of women. But Schneider thought it was time the city had a statue honoring a real woman, and she thought civil rights icon Marian Spencer was the perfect woman to be the first.

So in the final weeks of Spencer’s life, Schneider asked Spencer’s friend and biographer, Dot Christenson, to find out if Spencer was OK with the idea.

“Dot went and asked her,” Schneider said Friday at a news conference. “And she wrote out a little note on a piece of paper saying, ‘I’d be honored to have a statue.’”

That’s how a small crowd came to be gathered Friday morning along Cincinnati’s riverfront for the Woman’s City Club of Greater Cincinnati launch of a fundraising campaign to erect a life-sized bronze statue of Spencer. The statue will be located in the Women's Committee Garden of Smale Park.

“You can actually hold hands with all of them to complete the circle,” sculptor Tom Tsuchiya explained. “You’ve got Marian’s left hand open and ready to clasp someone’s hands and people can join the sculpture. They can join in on the piece when they visit right here on this spot.”

The design aims to honor Spencer’s lifetime of work fighting for the rights of everyone and uniting communities, he said.

“Ultimately, there’s another message with the sculpture that works with our city’s motto, that’s Juncta Juvant,” Tsuchiya said. “An idiomatic translation would be strength in unity. And I think that’s the one thing that you could say that Marian’s main achievement was – was bringing people together and making our community a lot stronger.”

Dignitaries spoke of Spencer’s legacy during the news conference, with several bringing up her work to integrate Coney Island and its pool.

Her friend Arzell Nelson called her “a living angel among us,” someone he could always count on for good advice.

Joe Mallory, the first vice president of the Cincinnati NAACP, called her “a tenacious warrior.”

“I stand on the shoulders and in the shadows of Marian Spencer,” he said.

Hamilton County Commission President Denise Driehaus praised the way in which she led.

Cincinnati City Councilman David Mann said he first got to know Spencer more than 40 years ago when she was president of the Cincinnati chapter of the NAACP.

“I think the first time I began to relate to her, I was mayor,” he said. “At the urging of the NAACP, the Department of Justice had done a review of our police department. And Marian had some strong views, which were correct. I was the mayor, and we had some intense discussions about what the next steps should be.”

Mann served alongside Spencer after she was elected to Cincinnati City Council. He praised her as a “fantastic presence” and “a delightful person.”

“A person who was so strong for her beliefs,” he said. “I count it a great opportunity in my life that I was able to serve with her.”

In fact, Mann said that when he traveled to Mississippi last weekend for the commissioning of the USS Cincinnati, he brought along three street signs for placement in various parts of the ship.

One was Vine Street, which Mann described as Cincinnati’s “main street.” Another was Joe Nuxhall Way, and the third was Marian Spencer Way.

“Who I happily described to the folks I was talking to as our iconic civil rights leader,” Mann said. “So she will ride with that ship as she sails the world.”

Tsuchiya and co-sculptor Gina Erardi will be working to have the statue ready for a dedication on June 28, 2020, which would have been Spencer’s 100th birthday.

First, the Woman’s City Club needs to raise $125,000, Schneider said, to cover the cost of the statue itself and an endowment for the Cincinnati Park Board so the statue can be maintained for the next 100 years.

Spencer will be facing due south, looking at the John A. Roebling Suspension Bridge. The National Underground Railroad Freedom Center, where she served as an honorary chair, is right behind the statue’s location, and a playground sits to the west.

“If there’s going to be one statue that’s going to be the first woman, Marian is actually the perfect person,” Tsuchiya said. “She’s someone who truly was a hero, and she changed all lives and really transformed our society.”

On a personal level, the statue will be the first public statue of a woman that Tsuchiya has sculpted, he said. He’s best known locally for his sculptures of Cincinnati Reds players around Great American Ball Park, and he also has sculpted several animals for the Cincinnati Zoo & Botanical Garden, he said.