'It's all about healing and social justice' 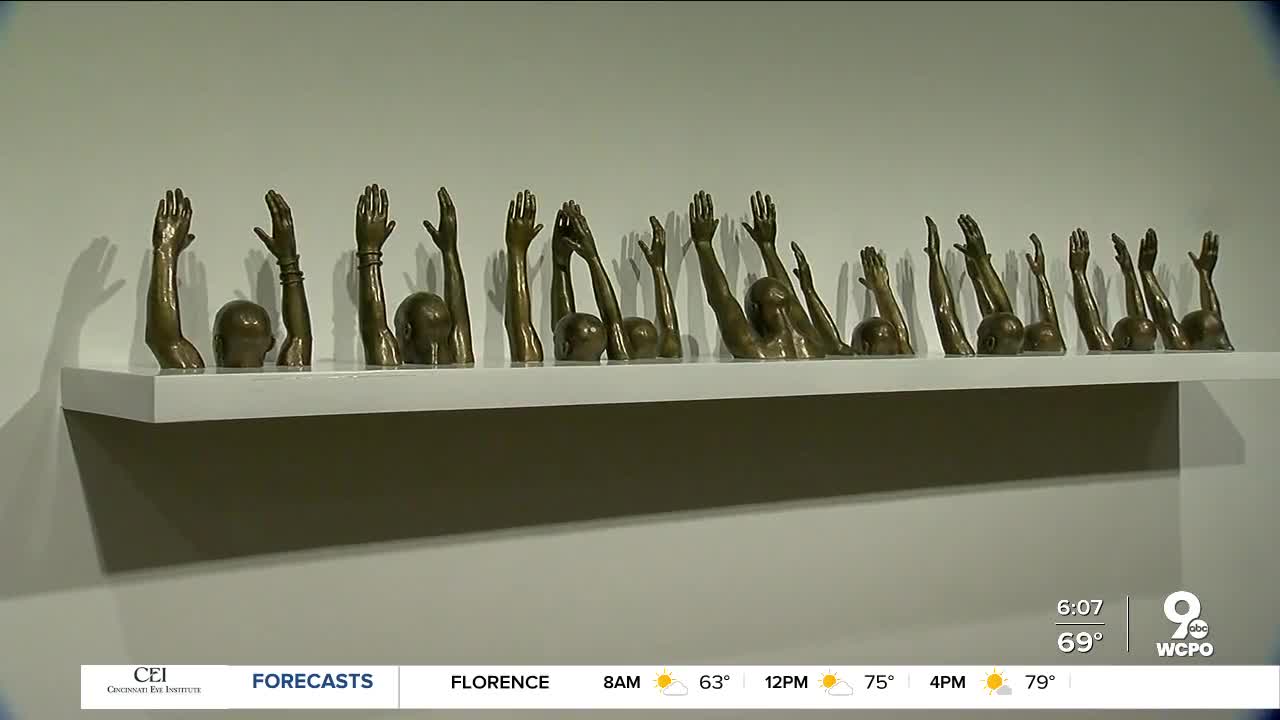 “Hank Willis Thomas: All Things Being Equal…” will be on view at the Cincinnati Art Museum from Sept. 4 through Nov. 8. The PNC Foundation is underwriting free admission to the exhibition for the opening weekend through Sept. 6. 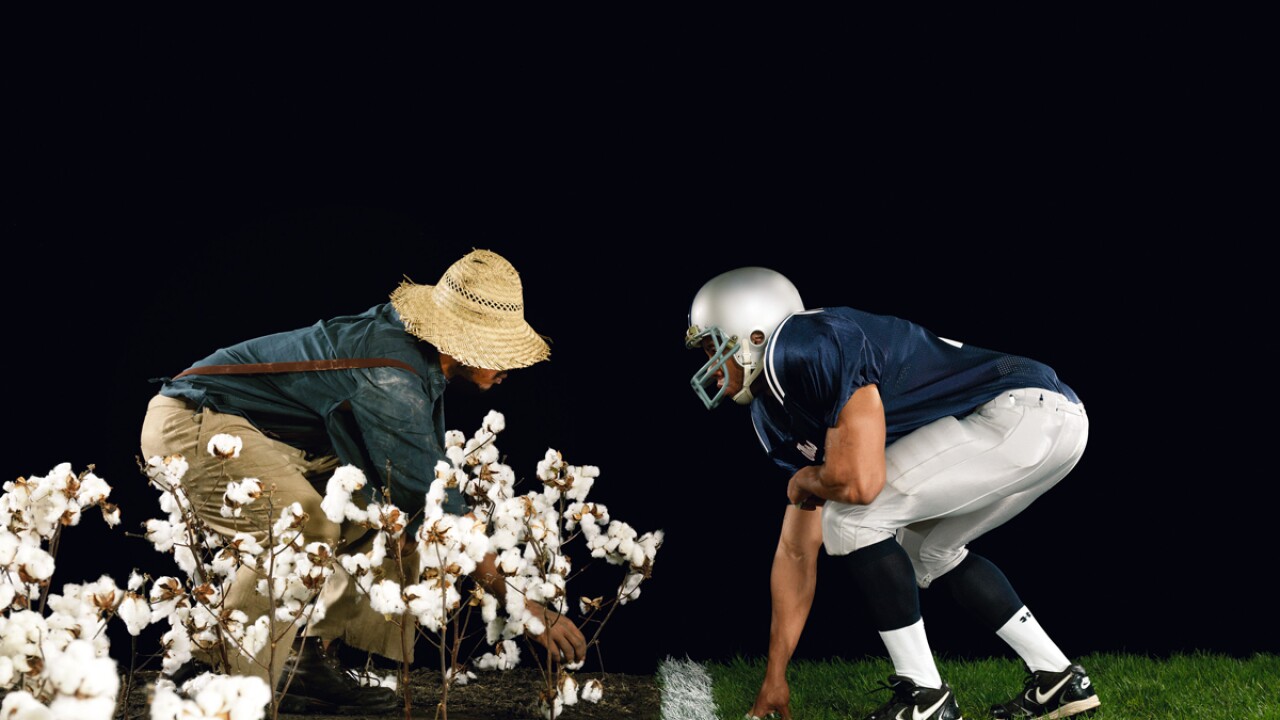 CINCINNATI — For as long as Hank Willis Thomas has been creating art, his work has explored themes of equality and racial justice.

He credits his parents for that foundation.

His father, the jazz musician and film producer Hank Thomas, was a Freedom Rider and a member of the Black Panthers. He also served in the Vietnam War. His mother, the art photographer and professor Deborah Willis, was a student in the 1960s and an artist inspired by the Black arts movement. She, too, was active in the civil rights movement.

“I grew up with the paraphernalia, with the images, with the stories,” Thomas said. “When I started making my own work, I recognized that a lot of the things that their generation and previous generations were working on as it related to equal rights, human rights and liberation, the work was not complete. I wanted to highlight that through my art and, from basically the very beginning, I was always really affected and trying to tell bigger stories of what’s not in the picture.”

When his cousin, Songha Willis, was fatally shot on Feb. 2, 2000, Thomas began to demand even more from his art.

“I was 24 years old when my cousin, Songha, was murdered during a robbery in Philadelphia,” Thomas said. “He was my big brother and my best friend and really my inspiration. And I had to figure out what my life would mean without him. And that’s what kind of brought the urgency to my work over the past 20 years.”

That urgency will be on view at the Cincinnati Art Museum in a retrospective called “Hank Willis Thomas: All Things Being Equal…” from Sept. 4 through Nov. 8. The PNC Foundation is underwriting free admission to the exhibition for the opening weekend through Sept. 6.

The exhibit, which has been in the works since 2017, was originally scheduled to open earlier this year, but the coronavirus pandemic caused a delay.

“It is extremely relevant to the world we live in now, but I think the point to take away there is that it was just as relevant to the world that we lived in in 2017, five years before that and 10 years before that,” said Nathaniel Stein, associate curator of photography at the Cincinnati Art Museum. “The timing makes it more difficult, but also more profound for the show to be here.”

Thomas said the timing of the show weighs heavy on him.

“I could never imagine that the work could be more urgent, and that’s humbling and frightening because a lot of what my work has been essentially about is history,” he said. “The reality is that, yeah, the past is present in this moment where we seem to – if not be recycling the past -- continuing some of the struggles of the past that we thought we were over.”

The exhibition takes up three galleries – most of the art museum’s temporary exhibit space – in order to have enough room for contemplation and social distancing, Stein said.

One room features artwork directly inspired by the murder of Songha Willis. Another examines the role of corporate branding in society.

“Hank Willis Thomas is an artist who is interested in justice, in listening to one another, in healing, in understanding history, in understanding the present world that we live in and the way that bias and inequality shapes our world in really fundamental ways,” Stein said.

The museum has a spot in one gallery with two upholstered chairs where visitors can sit and reflect on what they see. A flag embroidered with more than 15,000 stars hangs nearby – one star for each person killed by gun violence in 2017.

“We were quite aware of a lot of the content of this exhibition is traumatic,” Stein said.

The exhibition also has a QR code on a wall nearby that can connect visitors with a mindfulness exercise.

The idea behind the exercise is to learn how to hold onto trauma for each other and use it to become more open to change.

Stein said he hopes people visit the exhibition and make use of those resources.

The museum is taking extra precautions to keep visitors safe during the pandemic.

Masks are required, hand sanitizer is available throughout the museum’s galleries and timed tickets ensure that there is plenty of space for visitors to maintain social distance. Touchless temperature screenings also are taken at the entrance.

“It is safe to visit the museum,” Stein said. “And if you feel safe being out in the world, please come and participate. If you don’t feel safe coming out in the world, please visit the website for the exhibition because there’s a lot of ways to engage with the themes at work in the show, and there are a lot of actions that people can take around the themes and spirit of the show.”

Kearney, the CEO of the Greater Cincinnati and Northern Kentucky African American Chamber of Commerce and a member of the art museum’s board of trustees, said he and his wife decided to help “in a very small way” ensure the new exhibit came to the region because they felt it was important for people to have the opportunity to see and enjoy Thomas’s work.

“Maybe it’s a catalyst for people to make new friends,” Kearney said. “That would be wonderful.”

For his part, Thomas said he hopes his work helps people understand his message that everyone has value and worth and inspires them to engage with the artwork and each other.

“I think it’s important that artists tell the stories – not only the horror and the struggle and the strife – but also the beauty that keeps people wanting to come together and putting themselves at risk,” Thomas said. “When someone walks away from my show, I want them to remember me. And if it’s not me, the person, it’s me the feeling, the essence, which I hope is something that they’ll enjoy.”

Thomas said he sums up that feeling in a mantra coined by his cousin: Love over rules.

“In spite of all the turmoil and complications of life, the one thing that can rise above it all is love when we utilize it,” he said. “And that does not mean just be passive and friendly and fake. I think love is an action – and sometimes a very strong action.”