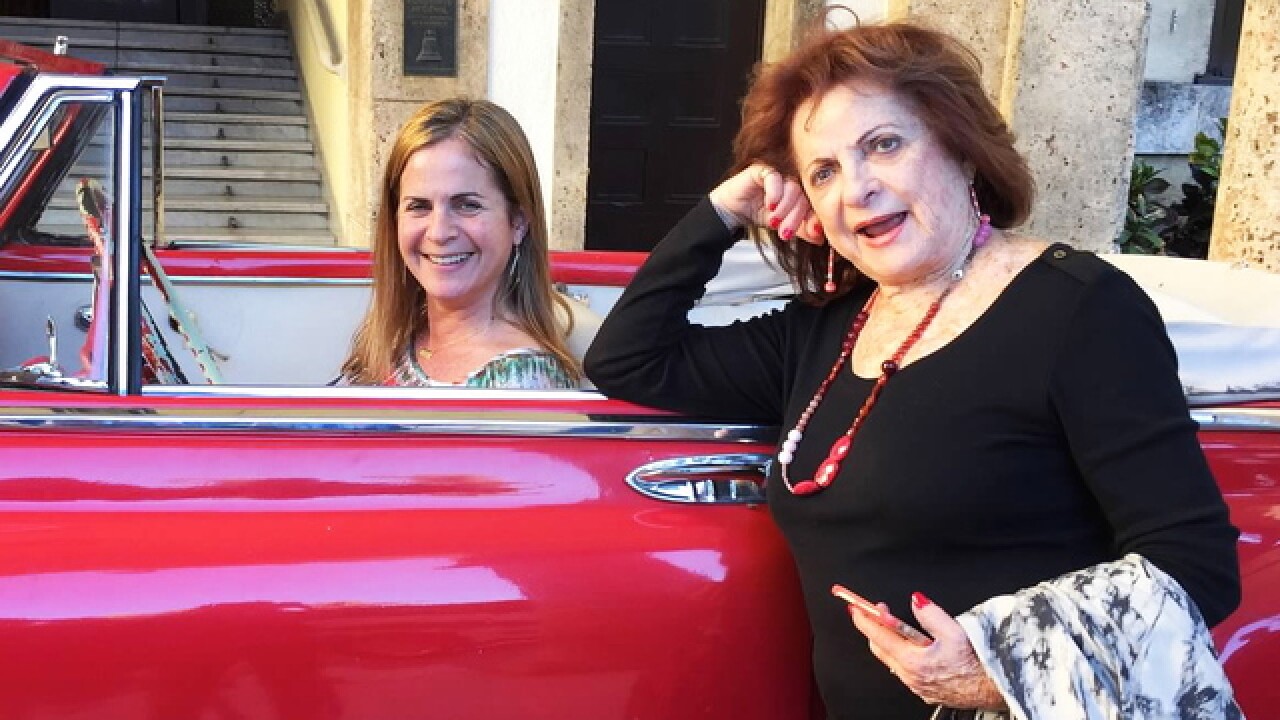 <p>Author Evelyn Fisher accompanied her mother, Cila Gold, on her return to Cuba 50 years after she fled.   </p>

If you knew my mother, Cila Gold, you’d know that going back to Cuba this past February was going to be an emotional experience.

She fled Cuba at 23 with my newly born sister, but no possessions. My father had left Cuba months before. She had never been back. Fifty years later, she came from her home in Miami to join our group of 32 Cincinnati women on our trip to Cuba.

Organized by Women’s Philanthropy of the Jewish Federation of Cincinnati, the five-day trip was intended as a way for Jewish women to connect with each other and with Jewish Cubans. We visited graves of lost relatives in the Jewish Cemetery, heard familiar songs and prayers at Shabbat services in Havana, and were reminded that Jews support each other all over the world.

If you knew my mother, you’d know to be worried, as I was. I was worried she would be depressed because Cuba has become so impoverished, and changed. I was worried she’d speak her mind, as she so often does, expressing her anger at Obama for normalizing relations, or at the Cuban government for its injustices. She’d lost her whole world when she had to flee. I knew of people who went to Cuba getting into trouble, including prison, if they criticized the regime too publicly.

But, despite all of the worries, we went.

A Happy Life Turned Upside Down

My mom had a happy and prosperous life in Cuba, including marriage to my dad, Solomon Gold. My father had a CPA office when Fidel Castro led the Communist revolution that overthrew the US-backed Batiste government. He joined Castro’s government with the promise of a new Cuba, but fled soon after when he realized its communist leanings.

In August 1960, first my father, then two months later my mother, along with most of Cuba’s 25,000 Jews and many others, left the Island. After first landing in New York, they settled in Puerto Rico, where I was born.

Even though I consider myself a Cuban Jew, or Jewban, as we say, I’d never been to Cuba before. My parents had never wanted to go back, even though the island formed who we were and who we are.

But suddenly, there we were. We visited the Patronato Synagogue in Havana, where my parents were married. It was so meaningful to be there with my mom.

My mother’s anti-government feelings extended to our guide. Often he would say something and my mom would say, “That’s not true, that’s not true!”

Friday was the best; my mother and I spent the day together. We visited the many places she’d lived in in Cuba while single or married.

A Small Act of Civil Disobedience

But Friday’s highlight for my mom was an act of civil disobedience. She snuck into the Casino de Portivo. I still can’t believe it.

The Casino used to be a private club for social activities; dances, parties, and swimming where my parents and their friends were members. Now it’s a government building, so we knew we wouldn’t be able to get in.

The entryway was wide open; evidently, a party was in progress. A man said, in Spanish, “You’re not allowed to come in here,” and I stopped. But Mom turned with a quick “One minute!” and kept walking. She so enjoyed telling my dad about that whole experience.

For me the highlight was seeing Cuba through my mom’s eyes.

Things have changed in our family. My dad had had no desire to go, and now he’s wondering if we should all go back and visit together. That’s big. I want to take my kids, too.

My mom just had the best time. Despite everything, she was always going to love Cuba.

So now you know my mother a bit better. I do, too.