Op-ed: Police put it on the line every day 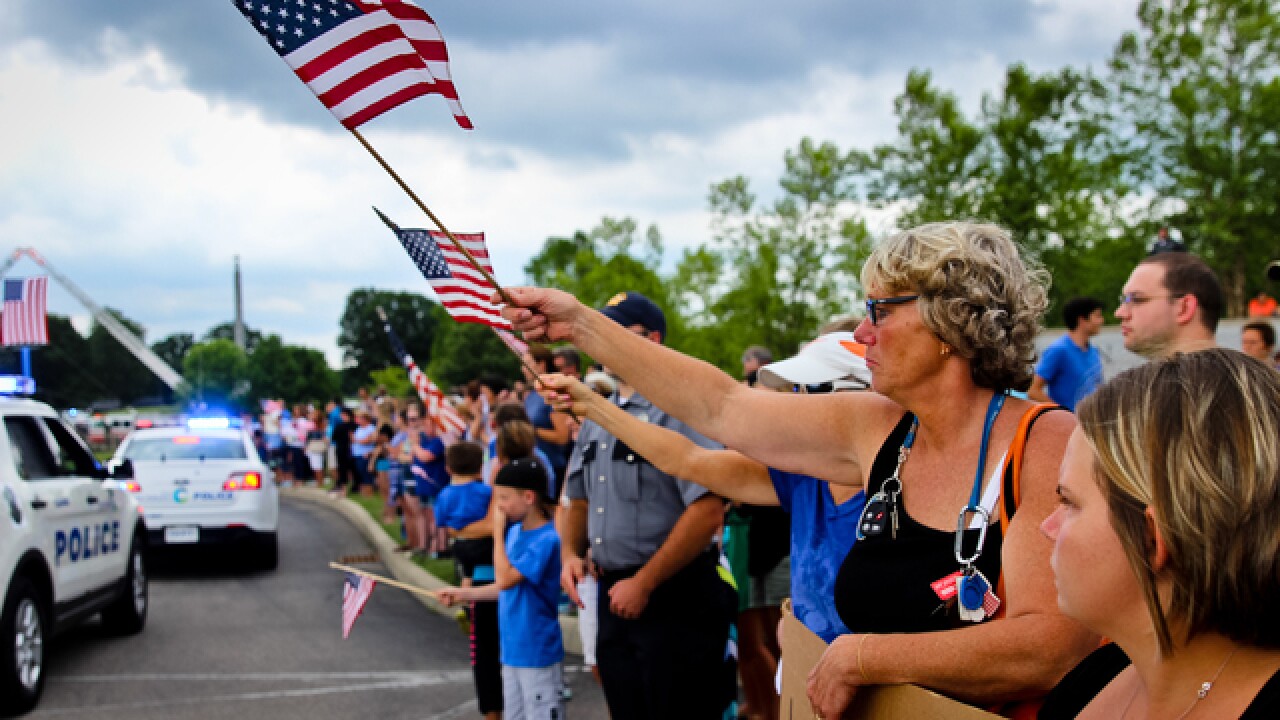 Jessica Noll | WCPO
<p>Folks line the street along Montgomery Road near the Gate of Heaven Cemetery, on Friday, June 26, 2015, to honor fallen Cincinnati Police Officer Sonny Kim, who was shot in the line of duty one week ago.</p>

Benjamin C. Glassman is the Acting U.S. Attorney for the Southern District of Ohio.

Police officers are public servants who are an integral part of our daily life. They catch criminals, find and return things that are lost, point the way when we ourselves get lost, and help the elderly and children alike cross the street. In other words, police officers serve; they protect; they listen; they teach.

What distinguishes a police officer’s job from that of almost all other public servants, however, is that it requires the officer to put his or her very life on the line in the performance of duty.

Policing is a difficult and honorable calling that bears tremendous responsibility. We ask our police officers to run toward danger, rather than away from it, and once there, we ask them to use their best judgment in making split-second decisions. The consequences of those decisions are an officer’s burden for life.

To be sure, just because policing is honorable work does not mean that every single police officer is an honorable person. There are rogue police officers who abuse their powers and commit crimes -- just as there are doctors and lawyers and teachers and priests who abuse their positions and commit crimes. It is precisely because policing is so important to the fabric of all of our lives that my office takes so seriously instances of police abuse. The U.S. Attorney’s Office has prosecuted corrupt police officers to the full extent of the law, and we will continue to do so.

But those cases are very much the exception, not the rule. In my experience, at least 999 out of every 1000 police officers discharge their duties professionally and honorably.

We All Want the Same Thing

Sometimes, I think, that rule is harder to see in today’s internet-saturated culture. It’s so easy to see a video clip on the internet of a police officer somewhere misbehaving and form an opinion, perhaps even subconsciously, that police officers are really like that—even if, on reflection, the misbehaving officer in the video is in some jurisdiction hundreds of miles away that has absolutely no connection with the southern half of Ohio or any police officer you’ve ever met or will ever meet.

The social dynamics of the internet, moreover, often seem to encourage taking sides as to everything. But policing is not something that’s amenable to taking sides because all of us want the same thing: safe communities in which order is maintained in an atmosphere of fairness and mutual respect.

The police with whom I work in the Southern District of Ohio are doing tremendous work. They are seeking to be proactive instead of reactive. They are using data-driven approaches to enforcement. In many respects, the police here are leading the way in developing innovative approaches to today’s crime problems. The police here are not immune to mistakes -- who is -- but they are trying, and they care deeply about the communities they serve. That warrants support and commendation.

This is National Police Week. It is a tradition that has grown out of President John F. Kennedy’s proclamation in 1962 that designated May 15 as Peace Officers Memorial Day. Tragically, within the past year, Cincinnati Police Officer Sonny Kim, Danville Police Officer Thomas Cottrell, Columbus Police Officer Steve Smith, and Hilliard Police Officer Sean Johnson have lost their lives in the performance of their duties.

They were not only public servants. They were family members, neighbors, and friends. As we remember them, let’s reflect on all police officers this way. The officers who serve here in the Southern District of Ohio are not some video clip from a far-away state. They are family members, neighbors, and friends who perform a dangerous, difficult, and essential job with honor. I thank them for their service.