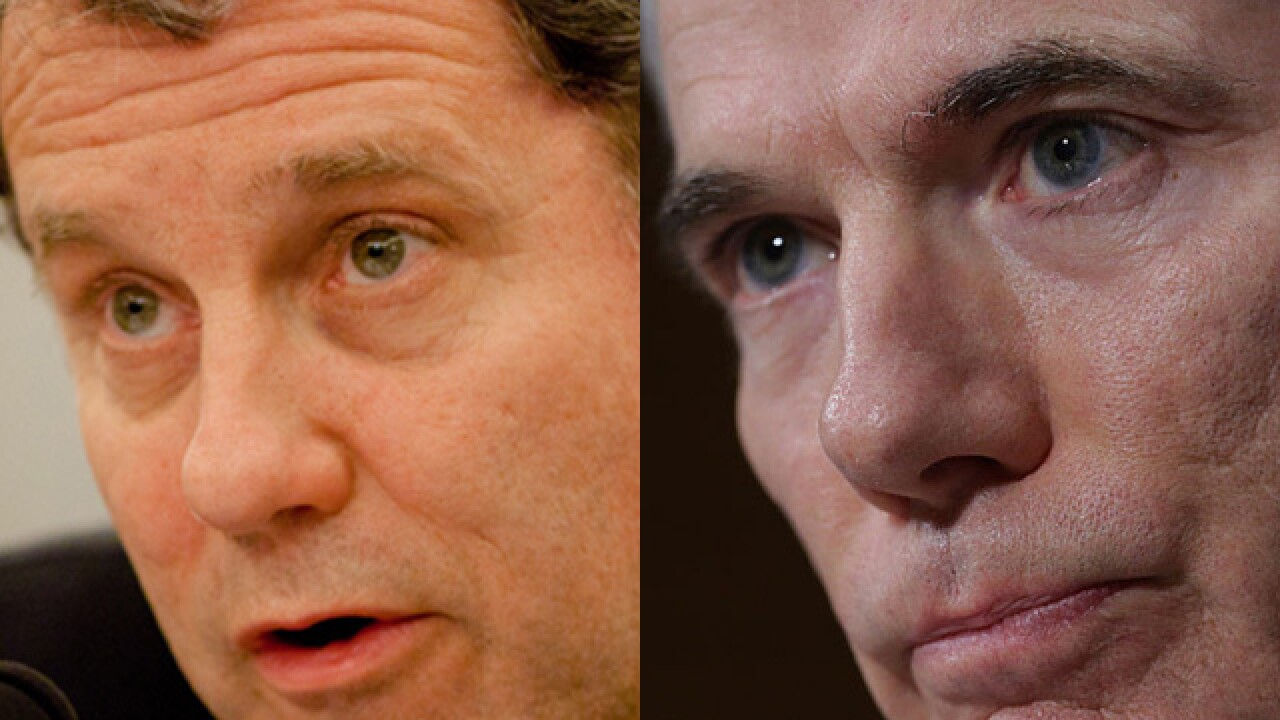 The House of Representatives passed a package of tax cuts, then the Senate Finance Committee, that chamber's tax-writing panel, passed its own version. The full Senate is expected to take up that bill after the Thanksgiving break.

Both bills are controversial and have raised issues of fairness and deficit growth. We asked Ohio's two senators, Republican Rob Portman and Democrat Sherrod Brown, to give us their take on the proposals. Sen. Portman is first; scroll down to read Sen. Brown's column.

Portman: Senate bill will 'create a better economy and a better future'

This week, after a lot of discussion over a lot of years, the Senate took a major step toward fixing our broken tax code. The Senate Finance Committee approved the Tax Cuts & Jobs Act, and the full Senate is expected to vote on this bill after Thanksgiving.

There are three main parts of this tax reform proposal, all three of which are important for Ohio.

The first is a tax cut for the middle class. Right now, even with the economy starting to grow, wages are flat and expenses are up across the board, with health care being the biggest expense. People are feeling the middle-class squeeze.

This bill will lower tax rates, double the child tax credit, and simplify the tax code by doubling the standard deduction to about $24,000 per family. Tax cuts for the middle class will give the family budget some needed help.

The independent Tax Foundation estimates that the tax cuts in this proposal will save the Ohio family at the median income level nearly $2,400 a year on their taxes. That extra $2,400 immediately helps working families pay for gas or groceries, save for retirement, make a car payment, or pay for health care.

Second, beyond the middle-class tax cut, this tax reform plan is going to help create more jobs and higher wages. The nonpartisan Congressional Budget Office says that workers will benefit through better jobs and wages if we get the business rate down below the average of the other industrialized countries.

This plan reforms a broken tax code that currently encourages the export of jobs and investment. A recent Ernst & Young study said that, since 2004, there would be 4,700 more American companies today if we had a 20 percent corporate tax rate, which this plan proposes. If we do that, we’re going to see more jobs and investment coming here to this country rather than going overseas.

Finally, the third thing this does that is so important is it levels the playing field internationally. Right now, there is between $2.5 trillion and $3 trillion of earnings trapped overseas because of our outdated tax code. Our tax reform plan encourages companies to bring that money back here and to invest in America. The result of these changes, the Tax Foundation says, will be nearly one million new jobs for the U.S. and more than 35,000 more jobs in Ohio.

There is a broad consensus that our current tax code is hopelessly broken, and we have to fix it. Many of these reform ideas have been bipartisan in the past, and I hope they can be again.

With real tax reform, Congress has a chance to keep our promise we made to help create a better economy and a better future. Let’s give Ohio families a boost with more jobs and higher wages and re-open the American economy as the best place in the world to do business.

Tax reform should be about one thing: cutting taxes for working families. But instead, the bill Republican senators passed out of committee in the dead of night last week would raise the cost of health insurance for families and slash Medicare -- all to pay for tax cuts for corporations that ship Ohio jobs overseas.

According to the nonpartisan Congressional Budget Office (CBO), a provision to dismantle the Affordable Care Act, which was slipped into the Republican Senate tax bill, would kick 13 million Americans off their health insurance, cause insurance premiums to rise by 10 percent, and force a $25 billion cut to Medicare.

What does any of that have to do with tax reform?

There’s only one reason this blow to working families’ and seniors’ health care was slipped into this bill: to free up more money for tax breaks for outsourcing corporations.

Last week, the CBO director confirmed that, because the corporate tax cuts in the Senate Republican plan aren’t paid for, passing this bill would trigger an immediate Medicare cut that would result in Ohio losing $16.4 billion over the next decade.

The CBO also found that taking away the subsidies that help American families buy health insurance will save $338 billion. What is that $338 billion going to pay for in this bill? The majority of money spent in this current bill is for tax cuts for corporations -- expert witnesses confirmed that during a Senate hearing last week.

And as we learned from my questions to witnesses at our hearings, those are some of the very same corporations that are being rewarded in this bill for sending American jobs overseas.

An expert witness confirmed that too.

And for a family of four in Ohio earning $60,000 a year, they could expect a $630 tax cut under this bill. But the Joint Economic Committee says they are going to pay $1,431 more in health insurance premiums under this bill. So they are in the hole $800.

You don’t have to be a tax expert to see Ohioans are getting ripped off. Tax reform should be about cutting taxes for working families, not increasing the cost of their health insurance.