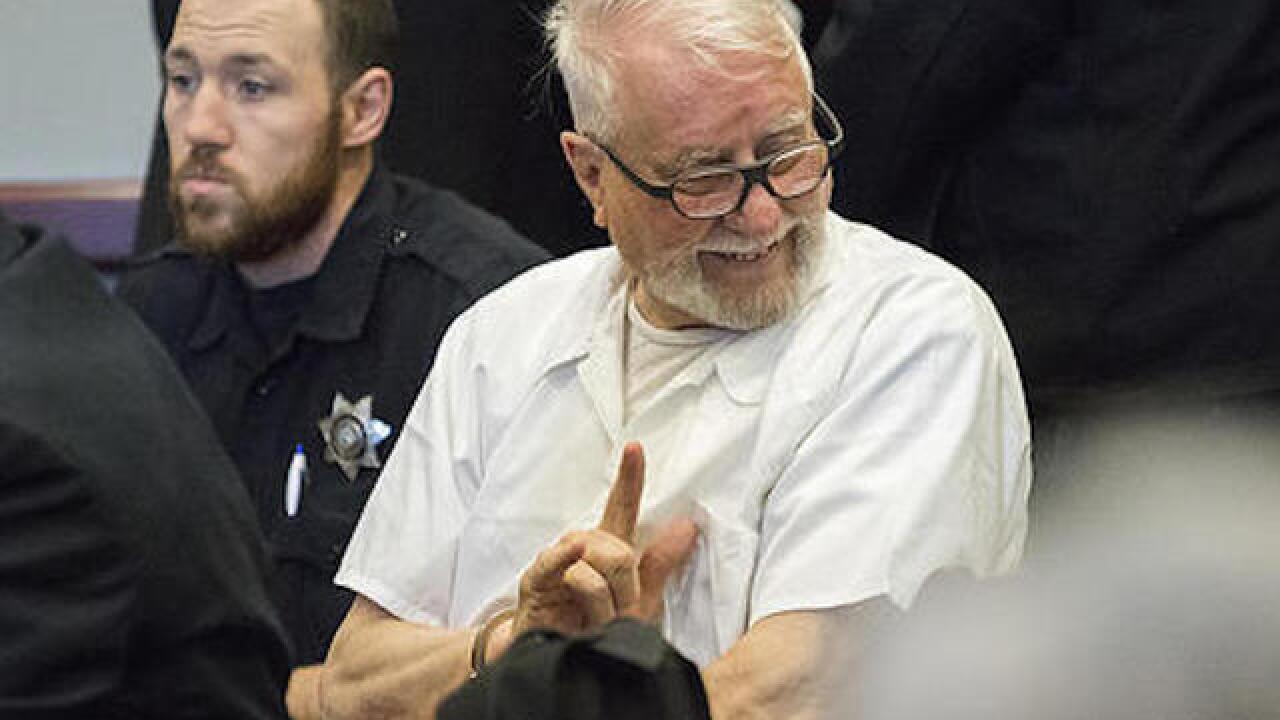 Copyright Associated Press
Danielle Guerra
<p>Jack McCullough gives his stepdaughter Janey O'Connor the sign of "I love you" as he sits during a hearing in the DeKalb County Courthouse on Friday, April 15, 2016 in Sycamore, Ill. McCullough who a prosecutor says was wrongly convicted in the 1957 killing of an Illinois schoolgirl was released Friday shortly after a judge vacated his conviction, meaning that one of the oldest cold cases to be tried in U.S. history has officially gone cold again. (Danielle Guerra/Daily Chronicle via AP) MANDATORY CREDIT; CHICAGO TRIBUNE OUT</p>

CHICAGO (AP) — A 76-year-old man who a prosecutor says was wrongly convicted in the 1957 killing of an Illinois schoolgirl was released Friday shortly after a judge vacated his conviction, meaning one of the oldest cold cases to be tried in U.S. history has officially gone cold again.

Jack McCullough was sentenced to life in prison in 2012 in the death of 7-year-old Maria Ridulph in Sycamore, about 70 miles west of Chicago. In a review of documents last year, a prosecutor found evidence that supported the former policeman's long-held alibi that he had been 40 miles away in Rockford at the time of Maria's disappearance.

Judge William P. Brady said Friday that Maria's abduction and murder had haunted the small town of Sycamore for decades, and that he had also lost sleep over the case.

"I'm not blind to the importance of this proceeding to many people," he said, minutes before ordering McCullough's release.

McCullough, in handcuffs, appeared shaken by the decision, rocking back and forth, then taking a deep breath. Family members behind him hugged and cried. Moments later, McCullough, of Washington state, looked back, winked and smiled broadly.

On the other side of the room, Maria's brother and sister displayed little emotion.

A few hours later, McCullough's stepdaughter, Janey O'Connor, drove McCullough away from a jail near the courthouse. McCullough, wearing street clothes, grinned at reporters from the back seat.

O'Connor said before picking McCullough up that she'd been convinced of her stepfather's innocence from the start.

"Jack was just a normal person doing his grandpa thing, and this happened to him," she said.

She said he told her he's looking forward to shopping for his children and grandchildren, because he has "a lot of birthdays and Christmases to catch up on." She said he has been studying Japanese while in prison and wants to travel to Japan.

Schmack, elected as state's attorney as McCullough's 2012 trial was coming to an end, filed a scathing report with the court last month. He had conducted a six-month review of evidence, including newly discovered phone records, and his report picked the case apart, point by point.

He said in an email that he was reviewing the judge's ruling and would not be commenting Friday.

Maria's brother, 70-year-old Charles Ridulph, said at the hearing that he would continue to push for a special prosecutor to take over the case. Brady will consider that motion at an April 22 hearing.

McCullough, who was living in the Seattle area when he was arrested, was released on a recognizance bond and isn't allowed to leave Illinois until the state attorney announces a formal decision on a retrial.

Maria's disappearance made headlines nationwide in the 1950s, when reports of child abductions were rare.

She had been playing outside in the snow with a friend on Dec. 3, 1957, when a young man approached, introduced himself as "Johnny" and offered them piggyback rides. Maria's friend dashed home to grab mittens, and when she came back, Maria and the man were gone.

At his trial four years ago, prosecutors said McCullough was the man who called himself Johnny in 1957, noting that he went by the name John Tessier in his youth. They said McCullough, then 18, dragged Maria away, choked and stabbed her to death.

McCullough has maintained his innocence throughout, saying he had "an iron-clad alibi" that he had been in Rockford, attempting to enlist with the U.S. Air Force at a military recruiting station, on the night Maria disappeared.

New phone records, Schmack said, helped to prove McCullough had made a collect call to his parents at 6:57 p.m. from a phone booth in downtown Rockford, which is 40 miles northwest of where Maria was abducted between 6:45 p.m. and 6:55 p.m.

Schmack reviewed police reports and hundreds of other documents, which he said had been improperly barred at trial and contained "a wealth of information pointing to McCullough's innocence, and absolutely nothing showing guilt."

He also noted that Maria's friend had identified McCullough as the killer five decades later from an array of six photographs; McCullough's picture stood out, partially because everyone but him wore suitcoats and their photos were professional yearbook photos.

McCullough, who was born in Belfast, Ireland, came to the U.S. with his mother in 1946 and settled in Sycamore, where he lived until he was 18, he said in a 2011 interview after his arrest. He said the town had the wholesome feel of the fictional town in the television show "Happy Days." He served four years in the Air Force and 10 years in the Army, including a stint in Vietnam.