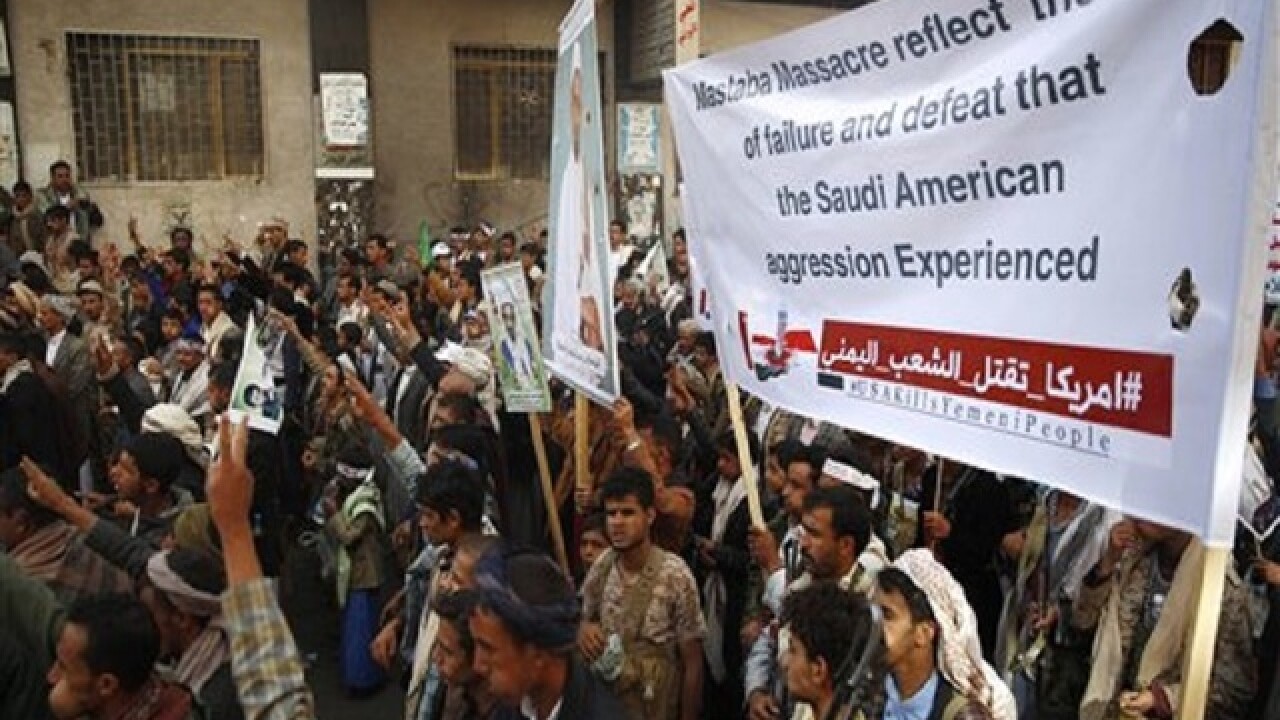 Hani Mohammed
<p>Shiite rebels, known as Houthis, attend a protest against Saudi-led airstrikes, in Sanaa, Yemen, Friday, March 18, 2016. Saudi Arabia said Thursday its military coalition will scale down operations in Yemen, an announcement that came as the death toll from an airstrike by the alliance on a market in the Houthi-controlled town of Mastaba north of the Yemeni capital on Tuesday reached at least 115. A U.N. official said over 20 children were among those killed in an area controlled by Yemen's Shiite rebels known as Houthis. (AP Photo/Hani Mohammed)</p>

By: Associated Press
Posted at 11:18 PM, Mar 22, 2016
SANAA, Yemen (AP) — The U.S. military conducted an airstrike Tuesday against an al-Qaida training camp in Yemen, causing dozens of casualties, a Pentagon spokesman said.
Pentagon spokesman Peter Cook said the training camp was located in the mountains, and was being used by more than 70 terrorists belonging to al-Qaida in the Arabian Peninsula.
Cook did not specify the location of the camp. But Yemeni security officials and a witness said the airstrike hit a former military base that had been taken over by al-Qaida militants about 75 kilometers (47 miles) west of the terror group's stronghold city of Mukalla.
"We continue to assess the results of the operation, but our initial assessment is that dozens of AQAP fighters have been removed from the battlefield," Cook said.
A tribal member at the site said about 40 people were killed and wounded in the Brom Maifa district on Tuesday. He didn't give a breakdown and said that bodies were still being counted. He spoke on condition of anonymity, fearing for his safety.
The Yemeni officials spoke on condition of anonymity because they weren't authorized to talk to reporters.
"This strike deals a blow to AQAP's ability to use Yemen as a base for attacks that threaten U.S. persons, and it demonstrates our commitment to defeating al-Qaida and denying it safe haven," Cook said.
Yemen has been left fragmented by war pitting Shiite Houthi rebels and military units loyal to a former president against a U.S.-backed, Saudi-led coalition supporting the internationally recognized government.
The war has given AQAP a freehand to expand and seize cities and large swaths of land. Militants from the extremist Islamic State group have also taken advantage of the chaos to wage a series of deadly attacks across the country.
Associated Press 2016