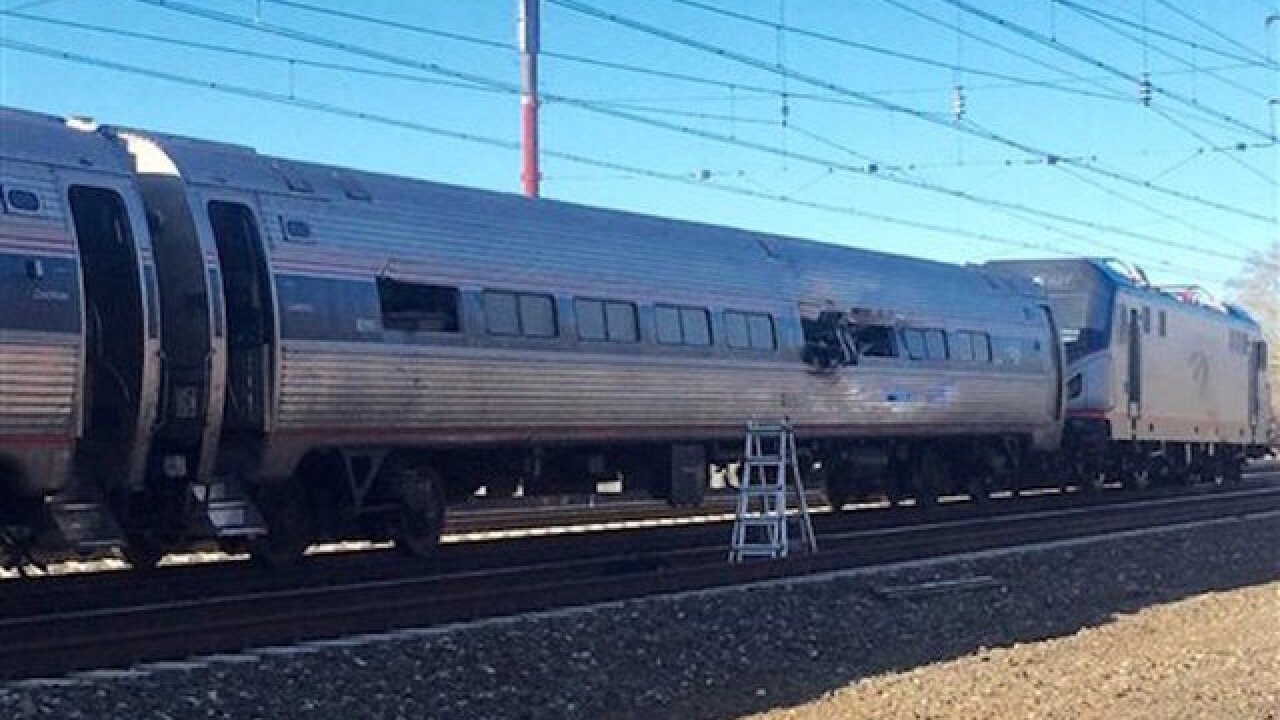 <p>This photo shows an Amtrak train following an accident Sunday, April 3, 2016, in Chester, Pa. Amtrak said the train was heading from New York to Savannah, Ga., when it struck a backhoe outside of Philadelphia. (Glenn R. Hills Jr via AP) MANDATORY CREDIT</p>

Train 89 was heading from New York to Savannah, Georgia, at about 8 a.m. when it hit a backhoe that was on the track in Chester, about 15 miles outside of Philadelphia, officials said. The impact derailed the lead engine of the train that was carrying more than 300 passengers and seven crew members.

U.S. Sen. Chuck Schumer, D-N.Y., told reporters at a New York news conference on another subject Sunday that he was told by Amtrak board chairman Anthony Coscia that the workers killed were the backhoe operator and a supervisor, both Amtrak employees. He said debris from the crash flew into the first two cars, causing the injuries to passengers.

Schumer said it's unclear whether the backhoe was performing regular maintenance, which is usually scheduled on Sunday mornings because there are fewer trains on the tracks, or whether it was clearing debris from high winds in the area overnight. But he said Amtrak has "a 20-step protocol" for having backhoes on the track, and no trains are supposed to go on a track where such equipment is present.

"Clearly this seems very likely to be human error," Schumer said, calling for Amtrak to review its processes. "There is virtually no excuse for a backhoe to be on an active track."

A message left with Amtrak officials has yet to be returned.

Thomas and Amtrak officials said more than 30 people were taken to hospitals with injuries that weren't considered life-threatening.

The National Transportation Safety Board was investigating. Officials with the Federal Railroad Administration were also sent to the scene, said Matthew Lehner, a spokesman for the agency.

Ari Ne'eman, a disability rights activist heading to Washington after speaking at an event in New York, said he was in the second car at the time of the crash.

"The car started shaking wildly, there was a smell of smoke, it looked like there was a small fire and then the window across from us blew out," said Ne'eman, 28, of Silver Spring, Maryland.

Some of the passengers started to get off after the train stopped, but the conductor quickly stopped them. Officials started evacuateing people to the rear of the train and then off and to a local church.

"It was a very frightening experience. I'm frankly very glad that I was not on the first car," where there were injuries, he said. "The moment that the car stopped, I said Shema, a Jewish prayer ... I was just so thankful that the train had come to a stop and we were OK."

This derailment comes almost a year after an Amtrak train originating from Washington D.C. bound for New York City derailed in Philadelphia. Eight people were killed and more than 200 were injured in the May 12 crash. The exact cause of that crash is still under investigation, but authorities have said the train had been traveling twice the speed limit.