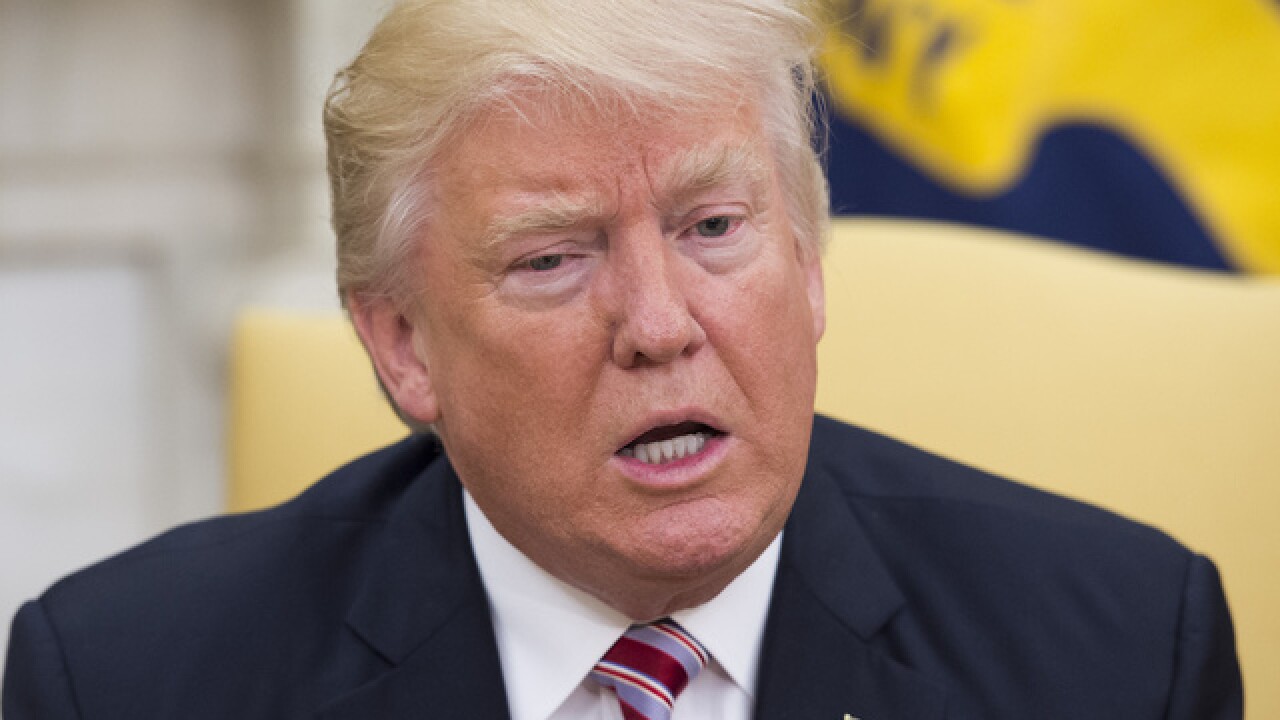 (CNN) -- President Donald Trump issued a thinly veiled threat Friday to fired FBI Director James Comey, apparently suggesting there are possibly recorded conversations between the two men that could be leaked to counter the former FBI director if necessary.

"James Comey better hope that there are no 'tapes' of our conversations before he starts leaking to the press," Trump tweeted.

The remark is an extraordinary development in the ongoing feud between the President and the agencies investigating alleged ties between his campaign and Russia.

President Donald Trump issued a thinly veiled threat Friday to fired FBI Director James Comey, apparently suggesting there are possibly recorded conversations between the two men that could be leaked to counter the former FBI director if necessary.

White House press secretary Sean Spicer said at an afternoon briefing that Trump's warning was "not a threat," adding, "The President has nothing further to say on that."

James Comey better hope that there are no "tapes" of our conversations before he starts leaking to the press!

When he fired Comey earlier this week, Trump garnered comparisons to President Richard Nixon and his infamous decision to remove the special prosecutor investigating Watergate crimes in 1973. The Watergate scandal accelerated drastically when it was revealed Nixon taped conversations in the White House. Trump didn't provide further details Friday on whether he was taping conversations.

Asked whether Trump was recording conversations in the White House, Spicer repeated his statement that Trump had nothing further to add.

Comey is "not worried about any tapes" of conversations between him and Trump, a source familiar with the matter told CNN on Friday, adding that "if there is a tape, there's nothing he is worried about" that could be on it.

Democratic Reps. Elijah Cummings and John Conyers, the respective ranking members of the House oversight and judiciary committees, requested from White House counsel Donald McGahn copies of all recordings between Trump and Comey.

"It is a crime to intimidate or threaten any potential witness with the intent to influence, delay, or prevent their official testimony," the two wrote in a letter. "The President's actions this morning -- as well as his admission yesterday on national television that he fired Director Comey because he was investigating Trump campaign officials and their connections to the Russian government -- raise the specter of possible intimidation and obstruction of justice. The President's actions also risk undermining the ongoing criminal and counter-intelligence investigations and the independence of federal law enforcement agencies."

Clapper: There could be evidence

Soon after tweeting the threat to Comey, Trump invoked former Director of National Intelligence James Clapper, who testified before the Senate earlier this week that he was not aware of any evidence demonstrating collusion between Trump's campaign and Russia.

"When James Clapper himself, and virtually everyone else with knowledge of the witch hunt, says there is no collusion, when does it end?" Trump tweeted.

Clapper, however, qualified his testimony by saying he had been unaware of an FBI investigation into the matter until Comey announced it to the public at a House hearing in March. It's also unclear how much Clapper would know about developments in the investigation after he left office earlier this year.

And speaking on MSNBC early Friday afternoon, Clapper would only say that the intelligence community lacked enough evidence to issue an assessment that represented a consensus of all the US intelligence agencies.

"That's not to say there wasn't evidence, but not that met that threshold," Clapper said.

"And you're not attempting to clear or convict anyone of collusion, it is just out of your scope?" MSNBC's Andrea Mitchell asked.

He added: "It would be in everyone's best interest to get to the bottom of this. And for the country. Otherwise, this is going to continue to linger as a dark cloud, in my opinion, over this administration."

It's not unheard of for presidents to record conversations, using different systems to do so, with and without participants' knowledge. Six presidents secretly recorded meetings and telephone conversations between 1940 and 1973, according to historian and CNN contributor Julian Zelizer.

John Dean, a former White House counsel under Nixon who served four months in prison for his role in the Watergate scandal, said it would be Trump, not Comey, with the most to lose were recordings of the two men to surface.

"Obviously, President Trump is confused. He is the one who must hope there are no tapes. Honest people don't have problems being taped," Dean tweeted.

The initial, official White House version of how Comey came to be fired was that deputy Attorney General Rod Rosenstein, fresh on the job, wrote a memo expressing concern about the way Comey had handled the Hillary Clinton email investigation.

But mounting evidence suggests Comey was actually fired because of the Russia probe.

Sources have told CNN that Trump's decision to ax Comey was made after he grew increasingly frustrated with him following a congressional hearing last week in which he said he was "mildly nauseous" over the idea that he helped sway the 2016 election. A source close to Comey told CNN's Jake Tapper Wednesday there are two specific reasons why Trump fired the FBI director:

1. Comey never provided the President with any assurance of personal loyalty.

2. The FBI's investigation into possible Trump team collusion with Russia in the 2016 election was accelerating.

Trump's surrogates, including Vice President Mike Pence, have struggled to keep up with the shifting narrative on how and why the decision was made, and Trump tweeted Friday it was "not possible" for his team to recount details and talking points with "perfect accuracy."

On Thursday, Trump, discussing the firing of Comey, told NBC News that he was frustrated by the ongoing investigation and believed it was motivated by Democrats' fury at losing the election.

Trump told NBC's Lester Holt: "And in fact when I decided to just do it, I said to myself, I said 'you know, this Russia thing with Trump and Russia is a made-up story, it's an excuse by the Democrats for having lost an election that they should have won.'"

Comey has not yet responded to the Senate intelligence committee's invitation to testify in closed session next week, Democratic and Republican spokespersons for the committee told CNN Friday.

Comey was not Trump's only target of an apparent threat Friday -- he also suggested the possibility of ending White House press briefings.

"As a very active President with lots of things happening, it is not possible for my surrogates to stand at podium with perfect accuracy!" Trump tweeted. "Maybe the best thing to do would be to cancel all future "press briefings" and hand out written responses for the sake of accuracy???"

Deputy White House press secretary Sarah Huckabee Sanders faced backlash from the press Thursday during her briefing after her comments on the Comey timeline conflicted with Trump's remarks to NBC.