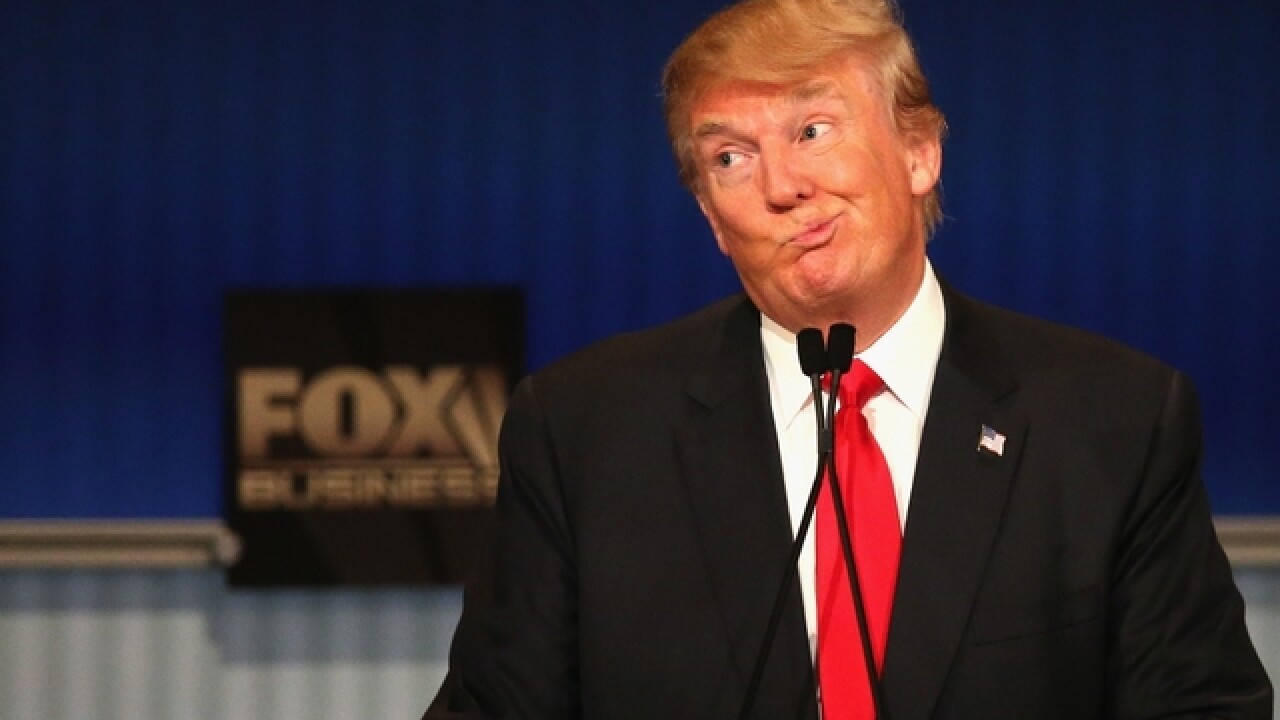 ST. LOUIS (AP) — In a stunningly brazen move, Donald Trump met publicly Sunday night with several women who have accused Bill Clinton of unwanted sexual advances and even rape, shortly before the Republican presidential nominee was stepping on the debate stage with the former president's wife, Hillary Clinton.
Bill Clinton never faced any criminal charges in relation to the allegations, and a lawsuit over an alleged rape was dismissed. He did settle a lawsuit with one of the women who claimed harassment.
The Trump pre-debate event was the clearest sign yet that he planned to use the former president's sexual history to try to distract from the swirling controversy over his own predatory remarks about women. Trump is under enormous pressure from the Republican Party after the release of a 2005 video in which the businessman can be heard saying his fame allows him to "do anything" to women.
Jennifer Palmieri, Hillary Clinton's communications director, said she wasn't surprised to see Trump "continue his destructive race to the bottom." She said the Democratic nominee was "prepared to handle whatever Donald Trump throws her way" on the debate stage.
Trump refused to answer questions from reporters about his own aggressive sexual remarks about women during the meeting in a hotel conference room with Paula Jones, Juanita Broaddrick and Kathleen Willey. Kathy Shelton, a fourth woman who appeared with Trump, was a 12-year-old Arkansas sexual assault victim whose alleged assailant was defended by Hillary Clinton.
Some of the women seated alongside him, however, were graphic in their accusations against the Clintons.
"Mr. Trump may have said some bad words, but Bill Clinton raped me and Hillary Clinton threatened me," Broaddrick said. "I don't think there's any comparison."
Broaddrick, a former Arkansas nursing home administrator, first claimed 17 years ago that Bill Clinton raped her during a meeting in Little Rock in 1978. Her lawsuit against him was dismissed in 2001 and criminal charges were never filed. Clinton has denied the allegations.
Trump's stunt set up an extraordinary scene in the debate hall. His campaign said all four women planned to attend the event, with Bill Clinton also expected to be present.
Trump is trying to change the subject from his own conduct. Even before Friday's new revelations of his sexual remarks about women, his campaign was slumping. But the release of the 2005 video has some leading Republicans convinced the damage is insurmountable.
Even Trump's most loyal supporters struggled to defend him on Sunday.
"They're remarks you certainly don't want to hear from anyone, much less a presidential candidate," Rudy Giuliani, the former New York City mayor, said on CNN. "I think he made a full and complete apology for it. He probably is going to do it again tonight."
The political firestorm was sparked by a 2005 video obtained and released Friday by The Washington Post and NBC News. In the video, Trump, who was married to his current wife at the time, is heard describing attempts to have sex with a married woman. He also brags to Billy Bush of "Access Hollywood" about women letting him kiss them and grab their genitals because he is famous.
NBC said Sunday that it had indefinitely suspended Bush, now a "Today" show personality, for his role in the crude conversation with Trump.
Trump's troubles have almost completely overshadowed the release of hacked emails from the Clinton campaign that revealed the contents of previously secret paid speeches to Wall Street. Clinton told bankers behind closed doors that she favored "open trade." Such remarks were at odds with her tough public comments.
Trump allies desperately hope the businessman can keep his focus in the debate on Clinton, raising questions about her trustworthiness and pushing his own populist economic ideas. The candidates will face questions in the town hall-style setting both from moderators and undecided voters seated with them on stage, a format that typically rewards candidates who show empathy and connect with the problems facing Americans.
But as Trump's meeting with Clinton's accusers indicated, he appeared to have other priorities.
Trump has long hinted he would raise Bill Clinton's sexual history at debates. In what was billed as a videotaped apology for the 2005 videotaped remarks, Trump said "Bill Clinton has actually abused women" and Hillary Clinton "bullied, attacked, shamed and intimidated" her husband's "victims."
As early as last week, Trump had said he didn't plan to raise the issues on the debate stage. But that appeared to change in the hours after his own remarks were made public and a flood of Republicans began turning against him.
Trump's own running mate, Indiana Gov. Mike Pence, has declared he could neither condone nor defend the remarks in the video revealed on Friday.
Other Republicans have taken the extraordinary step of revoking support for their party's nominee. Among them: Ohio Sen. Rob Portman, New Hampshire Sen. Kelly Ayotte — both are running for re-election — and the party's 2008 nominee, Arizona Sen. John McCain. Some called on Trump to quit the race.
"I thought about years from now when my daughter Kate is old enough to know what is in those tapes and to understand what he is talking about," Ayotte said of her 12-year-old daughter during a press conference Sunday. "I want her to know where I stood."
At a fundraiser in Chicago, President Barack Obama called Trump's rhetoric "disturbing." Obama said "it tells you that he's insecure enough that he pumps himself up by putting other people down."
Trump spent Sunday morning highlighting Twitter messages from supporters who slammed Republican leaders for abandoning him. In his own message, Trump said, "So many self-righteous hypocrites. Watch their poll numbers — and elections — go down!"
Copyright 2016 The Associated Press. All rights reserved. This material may not be published, broadcast, rewritten or redistributed.