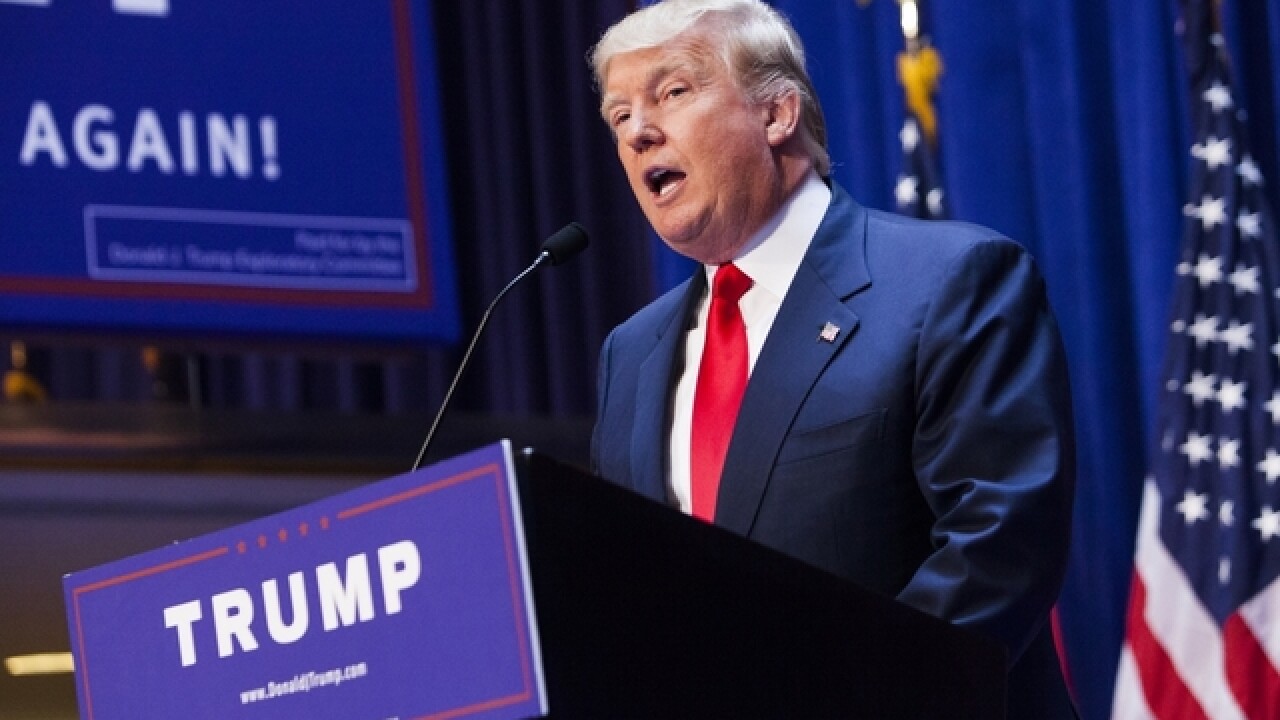 TAMPA, Florida (AP) — Visiting a battleground state he can't afford to lose, Donald Trump promised Hispanics "a much better life" Wednesday in a Florida speech that continued his recent effort to soften his tone and broaden his support 11 weeks before the presidential election.
And, in an interview, he suggested he would "work with" some of the immigrants in the United States illegally, stopping short of proposing a legal path to remaining in the country but suggesting a startling about-face from his previous hard-line mass deportation proposal.
Yet the Republican presidential candidate also repeated his promise to build a wall along the U.S.-Mexican border to keep out immigrants, underscoring the tricky balancing act he faces in retaining backing from conservatives while beckoning to moderates for their votes.
"I am going to fight to give every Hispanic citizen a much better future, a much better life," Trump told a crowd in Tampa as polls show him trailing in the critical state. "You have the right to walk outside without being shot. You have a right to a good education for your child. You have the right to own your home. You have the right to have a good job."
At a rally later Wednesday in Jackson, Mississippi, Trump repeated his claim that Democratic rival Hillary Clinton "is a bigot who sees people of color only as votes."
Clinton scoffed at that accusation during an interview Wednesday night on CNN. "He is taking a hate movement mainstream," she said, arguing Trump is "very much peddling bigotry and prejudice and paranoia."
Trump dominated presidential campaign coverage for the day as Clinton was fundraising in California.
Her drive for the White House got a rhetorical boost when her defeated competitor for her party's nomination, Vermont Sen. Bernie Sanders, told The Associated Press that he'll campaign actively for Clinton this fall. Sanders, who turns 75 on Sept. 8, also said he's leaning toward seeking re-election as an independent senator in 2018.
Trump's appeal to Hispanics largely echoed his recent outreach to African-Americans. He rarely tried to explicitly lure minority voters during his unlikely rise to the GOP nomination earlier this year.
Now facing a bigger electorate, Trump suggested Hispanics have been taken for granted by Democrats. He said the 600,000 Latino-owned businesses in Florida would benefit under his economic plan, but he offered few specifics.
"Hispanics are tired of being used by these phony politicians," Trump roared above the rumbles of a thunderstorm audible inside. "I say, what do you have to lose? I will fix it."
Hispanics make up a sizable and growing percentage of Florida's population. Trump will have a narrow path to the White House without winning the Sunshine State, where he owns several resorts and which he dubbed "his second home" on Wednesday.
Trump made no mention at the rally, largely attended by white supporters, of his remarks Tuesday that he would consider "softening" laws dealing with immigrants in the country illegally. But in an interview broadcast on Fox News Channel, he said that while he would not allow citizenship, he would "work with" those in the country illegally.
"Let me go a step further," Trump said. "They'll pay back taxes, they have to pay taxes, there's no amnesty, as such, there's no amnesty, but we work with them."
That is a far cry from the early days of the GOP primaries, when Trump vowed to use a "deportation force" to round up and deport the millions of people living in the country illegally, and appears to be far more in line with the more moderate plans that Trump criticized when they were floated by his Republican primary rivals.
he said only that "any immigration policy I support as president must pass these three tests," before broadly saying it must improve the wages, safety and quality of life of U.S. citizens.
At the rally in Jackson, an overwhelmingly African-American city, Trump made a similar outreach to black voters and called Clinton "a bigot" for allegedly taking for granted the support of minority voters.
Trump aides confirmed he will soon tour churches, local businesses and charter schools in black and Hispanic urban neighborhoods. Dr. Ben Carson, a close ally and former GOP primary rival, said he will accompany Trump on at least one visit.
Trump, in Mississippi, linked the movement fueling his campaign to the United Kingdom's vote to leave the European Union — and brought Nigel Farage, an architect of Britain's successful "Brexit" campaign, up on stage.
Meanwhile, one of Trump's most reliable allies made plans to aid him this fall. The National Rifle Association's political victory fund has reserved about $2.7 million in TV commercials in September and October, Kantar Media's political ad tracker shows. The NRA is focusing on swing states Ohio, North Carolina and Pennsylvania.
Copyright 2016 The Associated Press. All rights reserved. This material may not be published, broadcast, rewritten or redistributed.