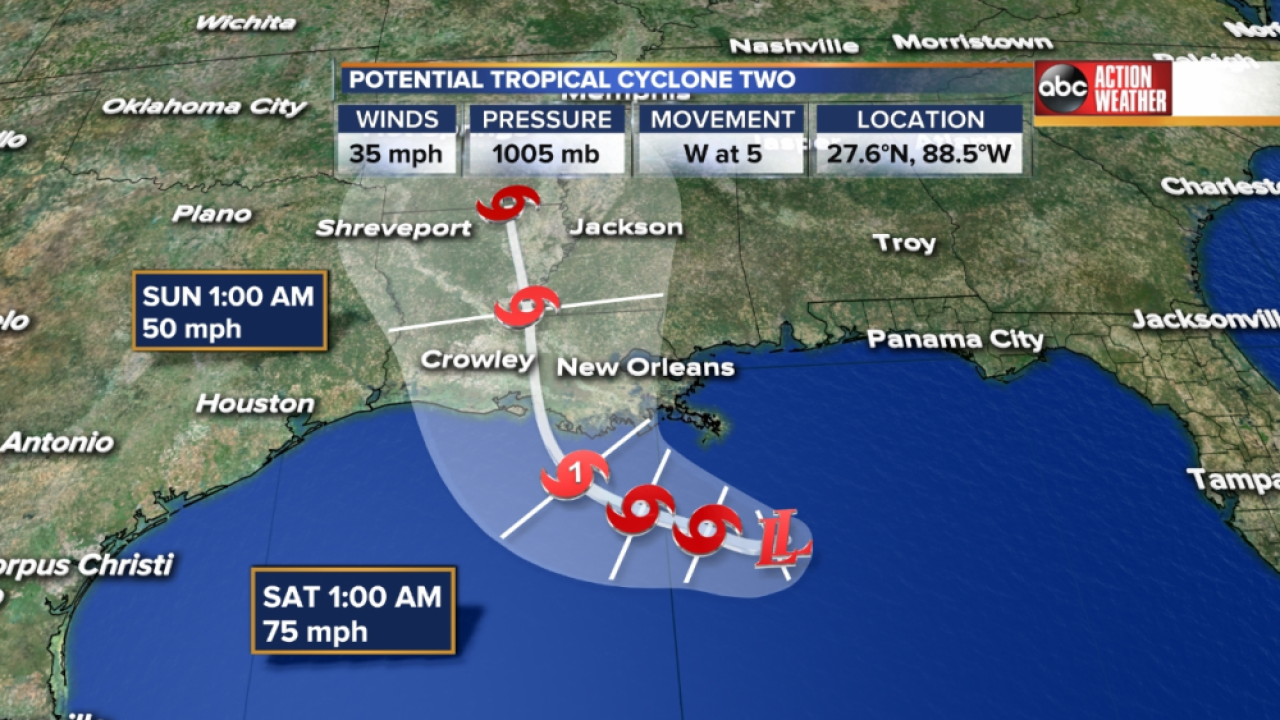 The National Hurricane Center confirmed Thursday that a tropical depression in the Gulf of Mexico has officially strengthened into Tropical Storm Barry.

The storm currently has winds of 40 mph — a system officially becomes a named tropical storm when winds reach 39 mph.

The National Hurricane Center says there's a chance the storm could strengthen into a Category 1 hurricane before it makes landfall. A storm officially becomes a hurricane when winds reach 74 mph.

Even worse: Barry is a slow-moving storm, crawling across the Gulf at just 5 mph, the National Hurricane Center said.

That means the system will hover over the same places for a long time, dropping relentless rain and adding to the widespread flooding.

In Grand Isle, Louisiana, the mayor and town council ordered everyone to evacuate Thursday.

"We are expecting a rain fall total that can range from 6" to 10"," officials said in a statement. "We will be experiencing unusual high tides that will range more than 3 feet above ground."

Torrential rain and flooding are the biggest threats

And storm surge on the coast could be "life-threatening," the National Hurricane Center said.

More than 200 flood gates in New Orleans and St. Bernard parishes are expected to be closed by Friday, local media reported.

New Orleans suffered the wrath of the storm's outer bands Wednesday, when up to 9 inches of rain submerged entire neighborhoods under water.

Resident Dannie P. Davis said she saw enough and is getting ready to leave. She just doesn't know where yet.

"I am evacuating. The water levels ... were too high for my comfort, and my car nearly flooded," Davis told CNN on Thursday.

"I haven't seen this much rain and flooding before a hurricane in a while. While the evacuation isn't mandatory, I am leaving as a precaution. Who knows what's to come, how and whether the city will able to handle it."

Davis said she's packing up her car with her two dogs and will "head north" in hopes of finding safe, "torrential-rain-free accommodations."

Louisiana Gov. John Bel Edwards warned "no one should take this storm lightly," as 10 to 15 inches of rain could fall within 24 hours between Friday and Saturday.

He declared a state of emergency and urged residents to have a contingency plan for family and pets.

"This is going to be a Louisiana event with coastal flooding and heavy rainfall potentially impacting every part of the state," Edwards said.

And just because the storm might max out as a Category 1 hurricane doesn't mean it won't be destructive. Hurricane categories only denote maximum sustained wind speeds, not rainfall or other factors.

"As we know all too well in Louisiana, low intensity does not necessarily mean low impact," the governor said.

This storm could impact gas prices

Even if you live far from the coast, you could still get hit by the storm in terms of gas prices.

The tropical system is swirling near many of the oil rigs in the Gulf of Mexico. Offshore oil and gas operations in the Gulf are evacuating their facilities, the Bureau of Safety and Environmental Enforcement said.

The companies have evacuated employees from 15 production platforms and four rigs so far. Three of the 20 rigs operating in the Gulf have also moved out of the path of the storm, it said.

Unlike drilling rigs, which typically move from location to location, production facilities stay in the same spot throughout a project's duration.

And even days before landfall. US oil rose above $60 a barrel on Wednesday amid worries that the storm system could derail crude production in the Gulf of Mexico.