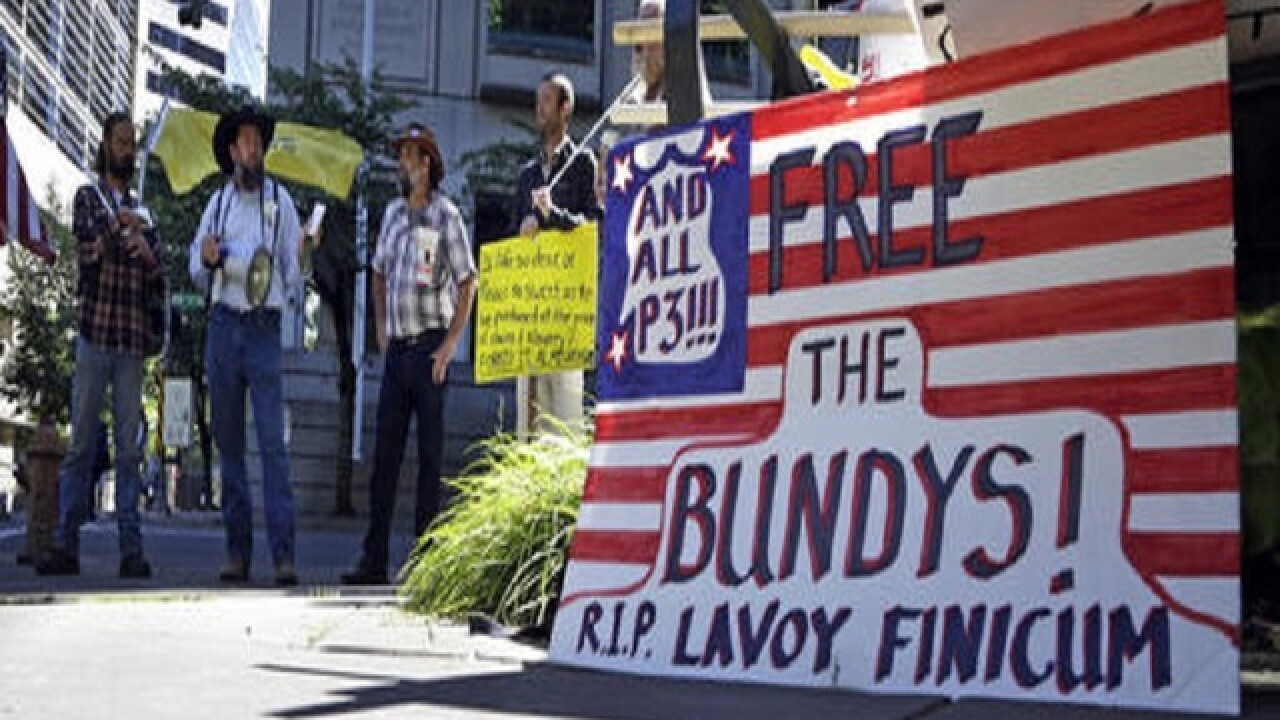 By: Associated Press
Posted at 3:38 AM, Sep 14, 2016
PORTLAND, Ore. (AP) — The leaders of an armed standoff at a rural wildlife refuge say they came to Oregon's high desert country to help locals deal with an overreaching federal government that has abused people's land rights for decades.
"I felt we were not there to break the law but to enforce the law," said occupier Ryan Bundy, referring to the U.S. Constitution. Bundy, who acted as his own attorney Tuesday as a trial began for him and six others accused in the standoff, told the court he wasn't anti-government, "as long as it's done correctly."
But in opening statements prosecutors said Bundy and the other protesters broke the law when they threatened and intimidated federal employees during the 41-day takeover of the Malheur National Wildlife Refuge.
"Everyone in this great nation has a right to his or her beliefs. We are not prosecuting the defendants because we don't like what they think or said," federal prosecutor Geoffrey Barrow told jurors. "We are prosecuting them because of what they did."
Barrow dismissed claims by group leader Ammon Bundy, Ryan Bundy's brother, and others that the takeover was a legitimate protest of federal land management. The Bundy brothers are part of a Nevada ranching family embroiled in a long-running dispute over land use.
The standoff began as a protest against the imprisonment of two Oregon ranchers convicted of setting fires and quickly grew into demands for the U.S. government to turn public lands over to locals. The issue traces back to the 1970s and the Sagebrush Rebellion, a move by Western states to win more control of vast federal land holdings.
The seven on trial are charged with conspiring to impede Interior Department employees from doing their jobs through intimidation or threats. Five are also charged with possession of a firearm in a federal facility.
Barrow said he will detail how the occupiers were divided into squads and drilled in hand-to-hand combat. He also said one of the participants in the standoff will testify against his former allies.
Marcus Mumford, the defense attorney for Ammon Bundy, said in his opening statement that the occupation had nothing to do with impeding federal employees.
Ammon Bundy "did what he did to demand accountability from the federal government," Mumford said. "He demanded the federal government obey the law — the nerve."
Bundy grew up the son of a rancher, Mumford said, and became a "reluctant activist."
Mumford repeatedly asserted that Bundy was trying to take the refuge land legally by a practice known as adverse possession, which is a way to gain title to land by occupying it for a period of time.
Mumford ended his statement by noting that Bundy and his followers never aimed a gun at anyone.
Referencing the fatal shooting by police of occupation spokesman Robert "Lavoy" Finicum, he said only one side of the standoff shot someone. "And it wasn't Mr. Bundy."
At the refuge near Burns, Oregon, protesters mostly came and went as they pleased. They changed the signs to "Harney County Resource Center" and said they would give the land to local officials to administer.
The occupation roiled the surrounding area, with some locals supporting the movement and others denouncing the occupiers as unwanted outsiders.
Counterprotesters, including environmentalists, traveled to eastern Oregon and urged the federal government to administer public lands for the widest possible uses, for everyone from ranchers to bird watchers.
The Bundys were arrested in a Jan. 26 traffic stop that included the fatal shooting of Finicum, an occupation spokesman. Four holdouts stayed at the refuge for another 16 days.
On Tuesday about a dozen protesters showed up outside the federal courthouse in downtown Portland. They waved an upside-down American flag and marched around the building during the trial's lunch break.
"We're slowly losing our rights, whether it's our rights to farm, our rights to fish, our rights to have ponds on our property, water," said John Lamb, a protester from Bozeman, Montana. "I just see that we're losing them all, slowly but surely — and we don't even have a say-so in it."
Copyright 2016 The Associated Press. All rights reserved. This material may not be published, broadcast, rewritten or redistributed.