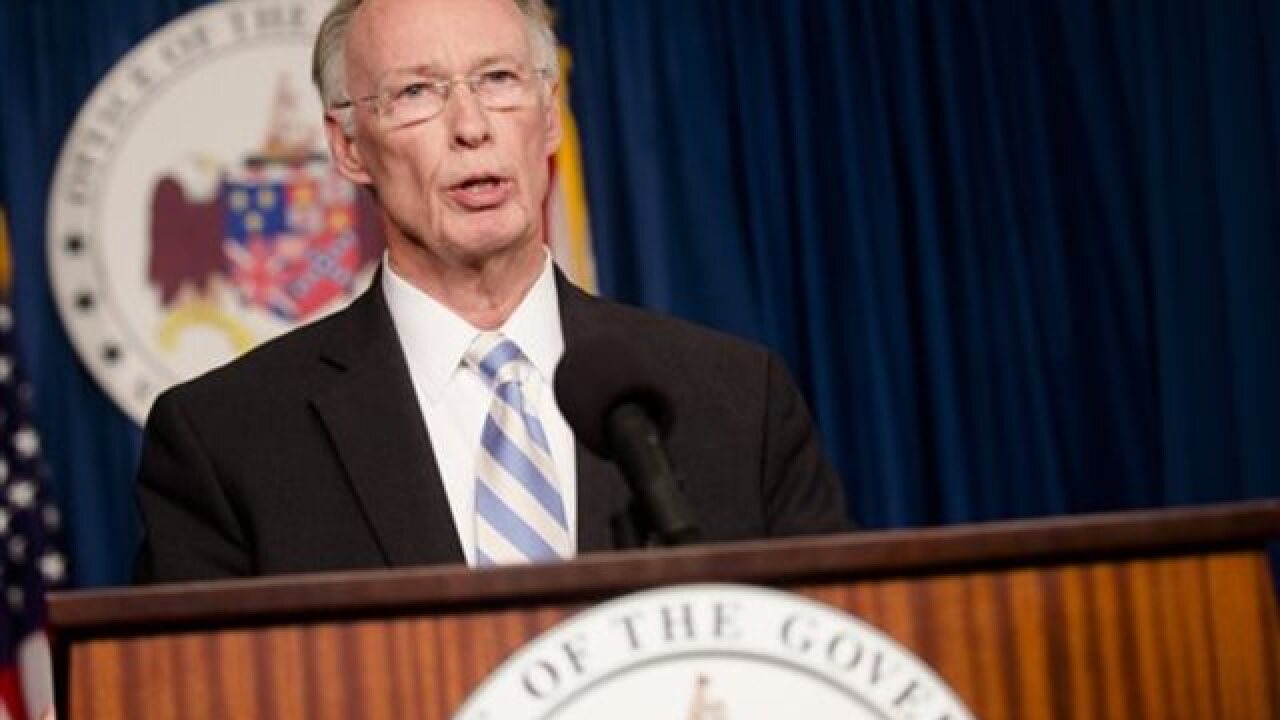 MONTGOMERY, Ala. (AP) — A top political aide to Alabama Gov. Robert Bentley resigned Wednesday, a week after he publicly admitted making inappropriate remarks to her but denied the two ever had an affair.
Soon after, a GOP lawmaker said he planned to introduce a resolution to begin impeachment proceedings against the Republican governor.
Rebekah Caldwell Mason announced her resignation in a statement sent by the governor's office, saying she would no longer serve as Bentley's senior political adviser and would no longer be paid by his campaign fund or work for a nonprofit organization formed to promote the his agenda.
"My only plans are to focus my full attention on my precious children and my husband who I love dearly. They are the most important people in my life," she said.
As Bentley's confidante, sounding board, adviser and message molder, Mason has been there for the biggest moments of his political career, from his improbable 2010 election to the development of his major policy initiatives. More recently, she has been at the center of the lowest moment of his political career.
Last week, Mason was thrust into the spotlight when former Law Enforcement Secretary Spencer Collier— a day after being fired by Bentley — accused the 73-year-old governor of having an inappropriate relationship with Mason. Collier, in making the claim, cited a recording he heard in 2014. The scandal has engulfed Bentley, a mild-mannered dermatologist and former Baptist deacon whose political ascendency was based partly on his morally upright, honest reputation.
Dianne Bentley, the governor's ex-wife, filed for divorce in 2015 saying their 50-year marriage had suffered an irreparable breakdown.
Recordings obtained by The Associated Press purportedly show the governor — before his divorce — professing love to someone named Rebecca or Rebekah and telling her how much he enjoyed kissing and touching her.
The recordings were provided by a former administration member who did so on condition of anonymity to avoid angering politically powerful former associates.
In a furtive phone call, Bentley says his family is vacationing at the beach and tells the person on the other end: "I love you so much; I worry about loving you so much."
While the governor is clearly heard, the person on the other end is not.
Later, he talks about getting physical. Bentley says he meant to text the person, but accidentally sent the message to a male aide.
"It didn't say, 'Hey baby I love you so much and I'd like to spent the rest of my life with you. ... You kiss me. ... I love that. You know I do love that. You know what, when I stand behind you and I put my arms around you and I put my hands on your breasts and I put my hands on you and just pull you in really close. I love that, too."
The governor in a press conference last week said that he did not have a "physical affair" with Mason and there was no "sexual activity."
"I made a mistake. Two years ago I made a mistake," Bentley said.
The governor's press office issued a statement this week saying, "The Governor has accepted responsibility for his behavior. He has apologized to his family, Rebekah Mason's family and the people of Alabama for his inappropriate behavior on the recordings.
Although most high-ranking Republicans have taken a measured reaction to Bentley's admission, the fallout from the scandal does not appear to be over. Rep. Ed Henry, R-Hartselle, said Wednesday that he plans to introduce the impeachment resolution when the Alabama Legislature returns from spring break next week.
"There's no credibility. There's no confidence from the legislature or the people of this state in his office and his abilities," Henry said.
The governor's press office did not have an immediate response.
Henry and Bentley are both Republicans who have frequently clashed over the past two years, including over the governor's proposal last year to raise taxes.
However, Henry acknowledged the resolution faces an uphill climb. A majority of House members would have to vote to begin proceedings.
Mason, a former television news anchor in Bentley's hometown of Tuscaloosa, signed on as spokeswoman for the little-known legislator's 2010 longshot bid for governor. She worked as the governor's communications adviser before leaving to work on his 2014 re-election.
Observers said Mason helped the governor talk through options as he weighed decisions ranging from taking down Confederate flags to his proposed $800 million prison construction project before lawmakers.
Her detractors within the administration said her opinion increasingly became the only one Bentley would trust.
"At the end of 2014, Governor Bentley made it clear to me in no uncertain terms that from that point forward anyone who questioned Rebekah's influence would be fired," Collier said.
As his senior political adviser, she was not paid by the state. Instead, she was paid with campaign funds — something the governor's office said Bentley had done with previous political advisers in his administration.
Campaign records show Bentley's campaign paid Mason's company, RCM Communications, $76,500 in 2015 for consulting and travel reimbursement. Mason disclosed last week that the Alabama Council for Government Excellence, a nonprofit formed to promote Bentley's agenda, also paid her company $15,000 for consulting work.
Mason's husband also works for Bentley as the director of Serve Alabama, the Governor's Office of Faith-Based and Volunteer Service.
In a statement issued last week, she said Bentley "apologized to me and to my family, we accepted his apology and have put all of this behind us."
Associated Press 2016