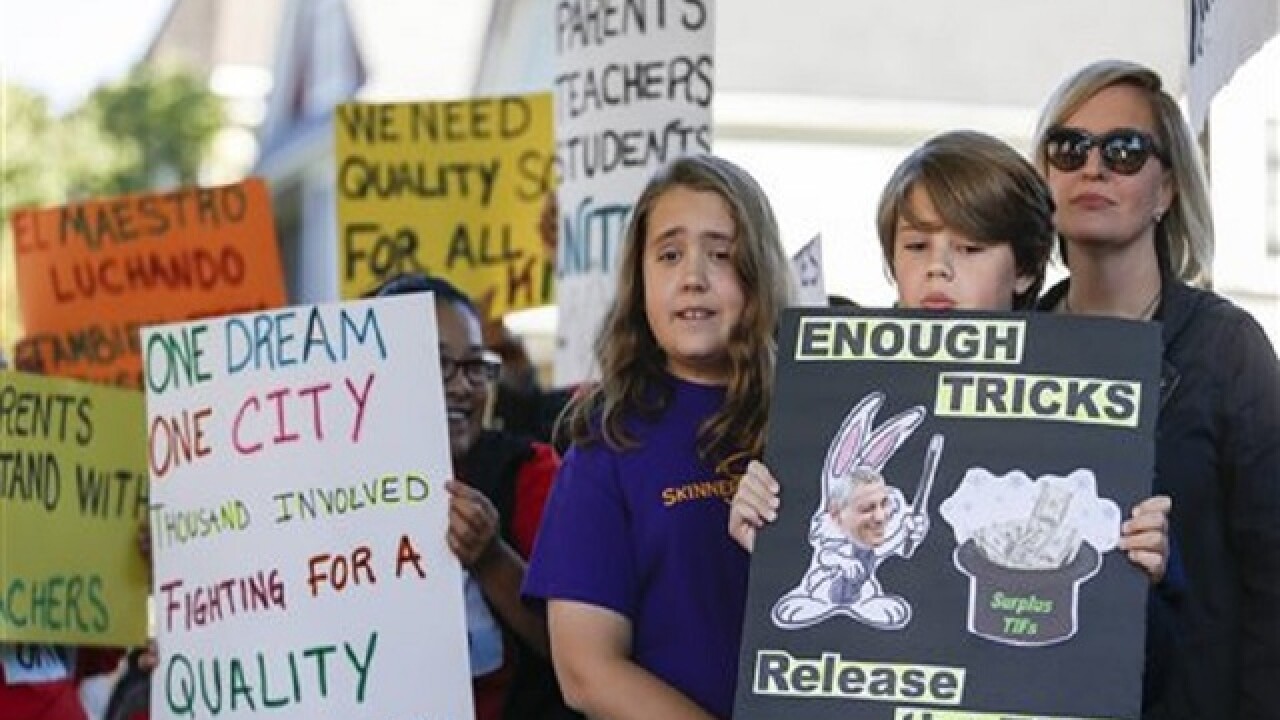 By: Associated Press
Posted at 2:15 AM, Oct 11, 2016
CHICAGO (AP) — Chicago teachers and officials in the nation's third-largest school district reached a tentative agreement late Monday to avert a strike that would have affected about 400,000 students.
The Chicago Teachers Union said its members were prepared to walk off the job Tuesday morning for its second major strike since 2012, when teachers were out for seven school days. At issue during the negotiations, which stretched into a second year, were pension contributions, pay raises, staffing levels and classroom funding.
Union leaders said teachers did not want to strike, but were concerned about threats to reduce their pay and benefits, as well as "the overall impact of school-based cuts on their students." Chicago Public Schools CEO Forrest Claypool said teachers deserve a raise but the district is facing massive financial challenges.
Here's a look at the situation:
___
THE ISSUES
The cash-strapped school district wanted to phase out the decades-old practice of paying most of teachers' pension contributions, replacing it with a total base wage increase in a four-year contract. The union wanted the district to keep up the pension payments and seeks raises at the end of a three-year contract. The new agreement calls for the district to continue to make the pension payments for veteran teachers, while new hires will make their own pension payments.
CTU President Karen Lewis said the union has commitments from the board on a number of things that will allow work in the classroom to be easier. Lewis had pointed out schools have lost some special education resources and librarians due to budget cuts. Plus, the district ended automatic pay raises for experience and education last year.
The bargaining unit of the union — representing about 28,000 members — rejected the district's last offer in February.
___
THE BACKDROP
The threat of a strike was set against perilous financial problems for Chicago's public schools as well as the state of Illinois.
The district announced layoffs last week for about 250 teachers and staff due to a larger-than-anticipated drop in enrollment. And credit rating agencies have placed the district at "junk" status, or below investment grade, while its $5.4 billion budget relies on increased property taxes, borrowing and $215 million in state funding.
But the state funding is contingent on a wider pension overhaul that must be approved by state lawmakers, who are deadlocked over the budget with Republican Gov. Bruce Rauner. The governor also has pushed to curb union power, suggested the district file for bankruptcy and unsuccessfully attempted a state takeover of the district's finances.
___
WHERE DO THE KIDS GO DURING A STRIKE?
Had there been a strike, all 652 schools would have been open during normal school hours and staffed by non-union employees to provide online learning, physical education and arts and crafts. Classes and extracurricular activities will be canceled, but free breakfast and lunch will be provided to students who need them.
Safe Passage routes, which are staffed by adults to help kids get to and from school safely, would operate as usual. The district also partnered with libraries, the park district and "Safe Haven" locations, such as churches, to provide child care.
In 2012, only 140 schools were open, and only from 8:30 a.m. to 12:30 p.m., with the district asking community organizations to provide additional programs.
___
OTHER FACTORS
The 2012 strike was the first teacher walkout in 25 years and was tied to evaluations, classroom conditions and job security. Parents and community leaders were largely supportive then, but it's unclear whether the sentiment would stick this year. Plus, the threat of a strike came as Chicago residents have seen major increases in property taxes and other fees, and an uptick in street violence.
One thing is clear: Negotiations had a different tone. In 2012, the outspoken Lewis and Mayor Rahm Emanuel were often at odds. Emanuel had canceled a pay raise, and Lewis dubbed him "the murder mayor" because of city violence and briefly considered challenging him in the 2015 mayor's race.
More recently, Lewis has said Emanuel's job is "impossible" and their relationship is "respectful."
Copyright 2016 The Associated Press. All rights reserved. This material may not be published, broadcast, rewritten or redistributed.