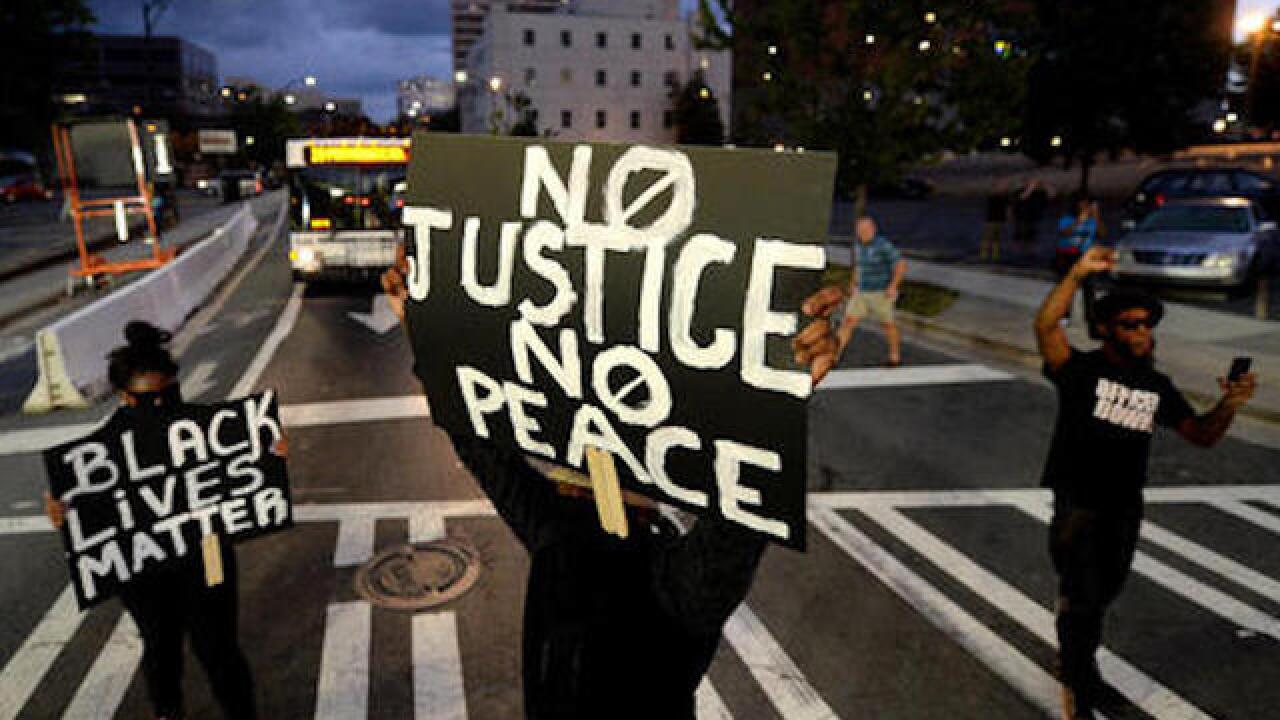 Copyright Associated Press
Jeff Siner
<p>Protestors block an intersection near the Transit Center as they march uptown in Charlotte, NC on Wednesday, September 21, 2016. The protestors were marching and rallying against CMPD officer Brentley Vinson's fatal shooting of Keith Lamont Scott on Tuesday evening at The Village at College Downs apartment complex in the University City area.</p>

CHARLOTTE, N.C. (AP) — The Latest on unrest in Charlotte following the shooting of a black man by police (all times local):

Charlotte's police chief says there is at least one video from a body camera and one other video from a dashboard camera that captured the deadly shooting of a black man by an officer.

But Chief Kerr Putney continued Friday to refuse to release the video, which could resolve wildly different accounts of the shooting of 43-year-old Keith Lamont Scott.

Police have said Scott refused repeated commands to drop a gun; residents say he was unarmed. An attorney for his family, who viewed the video Thursday, says it's not clear from the video if he's holding anything, including a gun.

Putney said during a news conference Friday that he cannot release more information about the shooting because his department is not leading the investigation, which is being conducted by the State Bureau of Investigation.

Charlotte's mayor says she does believe video of the police shooting of a black man should be released publicly, but she says it's a matter of when.

Mayor Jennifer Roberts said during a news conference Friday that "I do believe the video should be released. The question is on the timing." Police Chief Kerr Putney echoed her remarks, saying the video's release is "a matter of when, it's a matter of sequence."

Protesters and the family of 43-year-old Keith Lamont Scott have called on authorities to release the video, which could resolve wildly different accounts of Scott's shooting.

Police have said Scott refused repeated commands to drop a gun; residents say he was unarmed. An attorney for his family, who viewed the video Thursday, says it's not clear from the video if he's holding anything, including a gun.

Police say they have arrested a suspect in the deadly shooting of a protester during demonstrations in Charlotte over an officer's killing of a black man.

Charlotte Police Chief Kerr Putney said during a news conference that the suspect was arrested Friday morning. He provided few other details about the arrest or the suspect but said that video led investigators to the shooter.

The protester was shot Wednesday night during a violent night of protests in Charlotte. Officials have since implemented a curfew that runs from midnight-6 a.m. They also have called in state troopers and the National Guard in an effort to maintain order. After two nights of unrest, Putney says Thursday night's protests were relatively peaceful.

Two major employers in downtown Charlotte have their employees back at work after protests were more peaceful in the wake of the shooting of a man by a city police officer.

Both Duke Energy and Wells Fargo had employees return to work Friday, after three days of protests rocked the city after 43-year-old Keith Lamont Scott was shot by a police officer Monday afternoon.

The large employers in the city kept their employees home Thursday, after protesters damaged a number of buildings in the downtown area.

President Barack Obama says recent reports of unarmed African Americans being shot by police "should be a source of concern for all Americans."

In an interview with ABC's "Good Morning America," Obama declined to address specific cases, although he noted that the city of Tulsa, Oklahoma, had invited the Justice Department to investigate the shooting there.

Obama said protesters expressing their frustrations by looting or breaking glass aren't going to "advance the cause" of racial justice. He added, "my hope is that in days to come, people in the community pull together and say, 'How do we do this the right way?'"

He said "it's important for all of us to say we want to get this right."

Organizers are planning weekend protests in Atlanta as a response to the police shooting deaths of Terence Crutch in Tulsa, Oklahoma, and Keith Lamont Scott in Charlotte, North Carolina.

The "ATL Silent Protest" is planned for Saturday. Organizer Steven Chatman tells WXIA-TV (http://on.11alive.com/2cRbqXd ) that instead of chanting and yelling as they did at July protests, protesters will remain silent.

The curfew has ended for Friday in Charlotte following a night of mostly peaceful protests of the shooting of a black man by an officer.

Charlotte Mayor Jennifer Roberts issued the curfew order Thursday night, to be in effect from midnight until 6 a.m. each day that the state of emergency continues.

Charlotte officials say the order was issued "to more effectively protect the lives."

Protesters are upset about the shooting of 43-year-old Keith Lamont Scott, a black man who was shot by a black police officer Tuesday afternoon.

Protests were violent Tuesday and Wednesday night. The curfew order was issued at 9:15 p.m. Thursday and officials said the protests were mostly peaceful. The North Carolina National Guard helped patrol the city Thursday.

Charlotte police have released details on charges against five people in the protests that followed the shooting of a black man by an officer.

Police spokeswoman Cindy Wallace said in a statement that 19-year-old Ian Bowzer is charged with kicking in doors of the Hyatt Hotel downtown Thursday. Bowzer was arrested and charged with injury to real property.

It wasn't known if the men have attorneys.

Another man faces similar charges for a break-in at another downtown restaurant Tuesday.

A third night of protests over a fatal police shooting in Charlotte gave way to quiet streets early Friday after the city's mayor enacted a curfew and rifle-toting members of the National Guard arrived to guard the city's business district.

The largely peaceful Thursday night demonstrations called on police to release video that could resolve wildly different accounts of the shooting this week of a black man.

Demonstrators chanted "release the tape" and "we want the tape" while briefly blocking an intersection near Bank of America headquarters and later climbing the steps to the door of the city government center. Later, several dozen demonstrators walked onto an interstate highway through the city, but they were pushed back by police in riot gear.