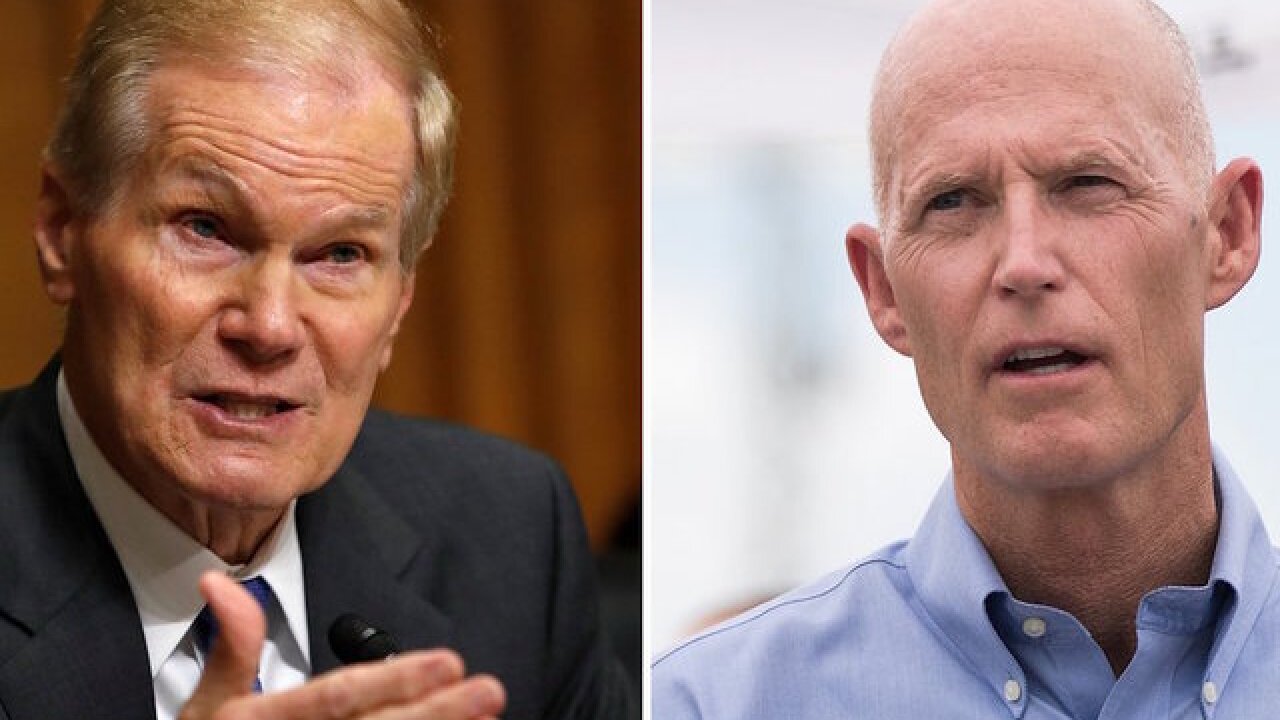 © 2018 Cable News Network, Inc.
AP/Getty Images
<p>Two of the highest profile races in the country -- both in Florida -- are likely headed to a recount soon.</p>

Two of the highest profile races in the country -- both in Florida -- are likely headed to a recount soon.

Sen. Bill Nelson's re-election bid is likely headed to a hand recount given that the incumbent Democrat now trails Florida Gov. Rick Scott by 17,000 votes, within the .25% margin required for a hand recount. Nelson's campaign aides believe he will emerge victorious once all the ballots are counted.

And on the governor's side, Democrat Andrew Gillum -- after conceding the race on Tuesday evening -- has grown more supportive of a recount of late, in part because his deficit to Republican Ron DeSantis is down to 38,000 votes, within the .5% needed for a machine recount.

Campaign aides, though, remain clear-eyed about the long odds that Gillum can make up that deficit.

Recounts, which have not officially been authorized in either race, put the outcome of two of the most closely watched races of 2018 on hold, with Democrats hoping for a miracle that could get both Gillum, a candidate who garnered considerable attention in his campaign against DeSantis, and Nelson, an incumbent who Democrats had thought would win his seat going into Tuesday night, over the finish line with a win.

"On Tuesday night, the Gillum for Governor campaign operated with the best information available about the number of outstanding ballots left to count. Since that time, it has become clear there are many more uncounted ballots than was originally reported," Gillum's communications director Johanna Cervone said in a statement. "Mayor Gillum started his campaign for the people, and we are committed to ensuring every single vote in Florida is counted."

At no point in the statement, though, did Gillum's campaign withdraw the concession and sources close to the mayor highlight that his outlook hasn't changed since his Tuesday night speech. It it is important to Gillum, these sources said, that his supporters know they are fighting for every vote.

"We want every vote counted, we believe that there are still votes out there for Mayor Gillum and we want to make sure his supporters know we are fighting for every vote," one source said.

Gillum and DeSantis have not talked since election night, the source added. Gillum told supporters on Tuesday that he talked to DeSantis and "congratulated him on what we expect will be him as the next governor of the great state of Florida."

Florida coming down to a recount gives political watchers déjà vu, given the impact the state's recount played on the 2000 presidential election that saw President George W. Bush elected after winning Florida by 537 votes.

And the recounts now have echoes of 2000: Gillum's campaign has hired Barry Richard to represent them during the recount. Richard had previously been known for representing Bush during the 2000 recount.

Elias told reporters on Thursday that he believes Nelson could come out victorious if there is a full recount. The senator needs to be within .25% to trigger a hand recount of ballots marked as undervotes (voters who did not fill out all available choices on the ballot) or overvotes (voters who made more choices than allotted on the ballot). The hand recount would only occur if there are enough overvotes, undervotes and provisional ballots left to change the outcome.

While he was down 57,000 ballots on election night, that total has ticked down to 17,000 votes on Thursday.

"It's a jump ball," Elias said. "But I firmly believe that at the end of this process, Nelson will prevail."

He added: "We're doing this not just because it's automatic, but we're doing it to win. A significant number of ballots have not yet been counted and, because of the size of Florida, we believe the results of the election are unknown and require a recount."

Elias said he and his team are keeping an eye on provisional ballots counted statewide, which he argued tend to favor Democrats, and votes in Broward and Palm Beach counties.

The center of Democratic voting concerns are in Broward County, the second most populous county in Florida, where lawyers believe there is an issue with how voters were calculated for Nelson. Election officials in Broward County have yet to reveal how many total ballots were cast, let alone how many they have left to count. Democrats believe Nelson's margin could shrink even more once ballots from the county -- along with nearby Palm Beach County -- are counted. Both counties are considered areas rich in Democratic votes.

Scott's campaign responded by accusing Nelson of trying to "steal" the election.

"It is sad and embarrassing that Bill Nelson would resort to these low tactics after the voters have clearly spoken," said a statement signed by Scott's team. "Maybe next, he'll start ranting that Russians stole the election from him."

Republicans, confident both Nelson and Gillum will lose, have grown clearly annoyed with the process.

But Democrats got a boost on Thursday when late-added votes flipped the leader in the race for Florida agriculture commissioner.

However, as the vote continued to trickle in, Caldwell's lead shrunk, and two days after the election, Fried has nosed ahead by just over 500 votes.

This race, like the gubernatorial and Senate races, is certainly headed to a recount.