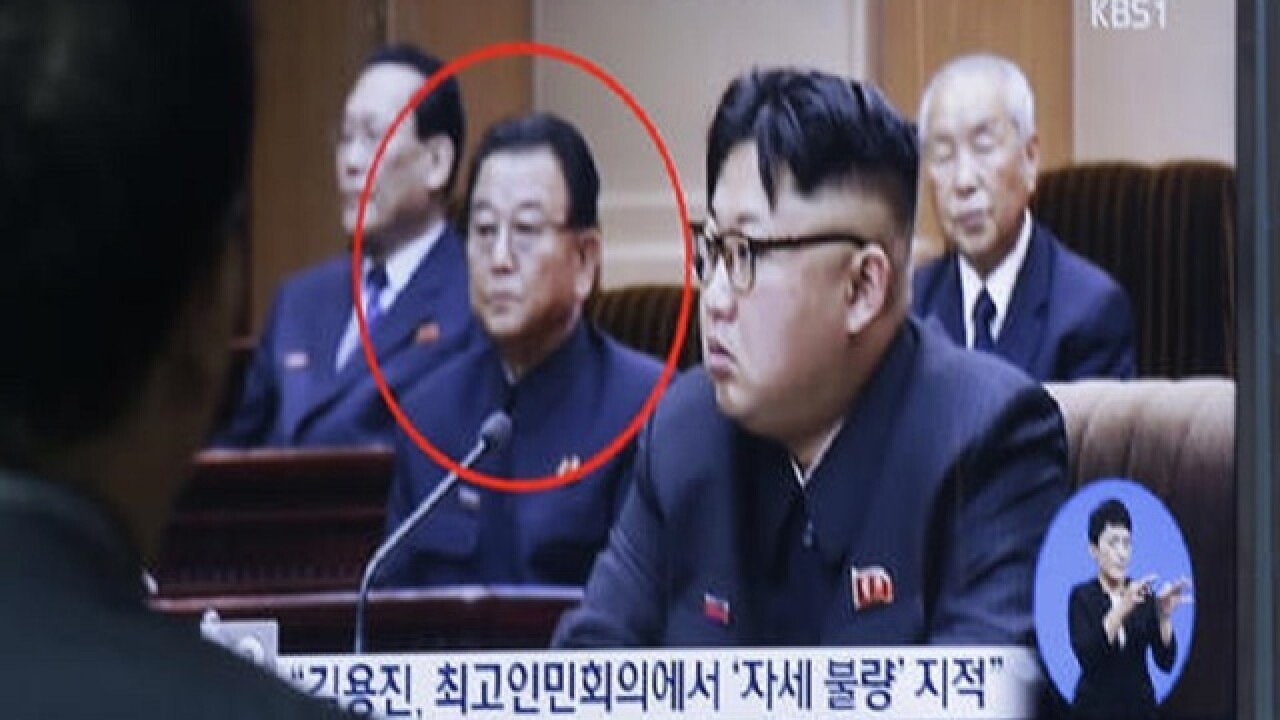 SEOUL, South Korea (AP) — North Korea has executed a vice premier and banished two other top officials to rural areas for re-education, South Korean officials said Wednesday.
If confirmed, they would be the latest in a series of killings, purges and dismissals carried out since North Korean leader Kim Jong Un took power in late 2011.
North Korea is a closed, authoritarian country with a state-controlled press that often makes it difficult for outsiders, and even North Korean citizens, to know what's happening in the government.
Rival South Korea, which runs several intelligence organizations mainly tasked with spying on North Korea, has a mixed record on reporting developments across the border. In May, a former North Korean military chief, who Seoul said had been executed, was found to be alive and holding several new senior-level posts.
Jeong Joon Hee, a spokesman for Seoul's Unification Ministry, told reporters Wednesday that Kim Yong Jin, a vice premier on education affairs in North Korea's cabinet, had been executed. Jeong gave no further details, including why and when his ministry believes he was executed and how it obtained the information.
But a South Korean official, speaking on condition of anonymity citing office rules, said Kim was executed by firing squad in July for unspecified anti-revolutionary and factional acts. The official said Kim first faced an investigation because of the way he was seated during a June meeting attended by Kim Jong Un.
Little is known about Kim Yong Jin, who was last mentioned by North Korea's state news agency on June 15, when it reported he attended an event celebrating the 50th anniversary of the founding of North Korea's taekwondo federation.
Kim Jong Un, believed to be his early 30s, is revered at the center of an intense cult of personality, with state TV occasionally showing aging senior officials kowtowing and kneeling down before him. Last year, South Korea's spy agency said Kim had his defense chief executed with an anti-aircraft gun for complaining about him and sleeping during a meeting he had presided over.
Jeong said Kim Yong Chol, a top ruling Workers' Party official in charge of anti-Seoul spy operations, had also been ordered to undertake "revolutionary re-education," in a reference to the banishment at a rural collective farm or a coal mine. Jeong said another senior party official dealing with propaganda affairs, Choe Hwi, was still on a similar "revolutionary re-education" program.
Seoul officials believe Kim Yong Chol, director of the party's United Front Department, orchestrated two attacks that killed 50 South Koreans in 2010, when he headed the North Korean army's intelligence agency. Kim disappeared from the public eye for about 50 days before the North's state media on Sunday mentioned his name in a list of officials who attended ceremonies marking the Youth Day.
Kim Yong Chol was banished at a rural farm for about one month between mid-July and mid-August because of alleged high-handed attitudes and attempts to expand his United Front Department's authority too much, according to the South Korean official who spoke about Kim Yong Jin's execution. The official said Kim Yong Chol was recently reinstated.
The rival Koreas have shared the world's most heavily fortified border since the end of the 1950-53 Korean War, and they bar ordinary citizens from exchanging phone calls, letters and emails without special permission.
Copyright 2016 The Associated Press. All rights reserved. This material may not be published, broadcast, rewritten or redistributed.