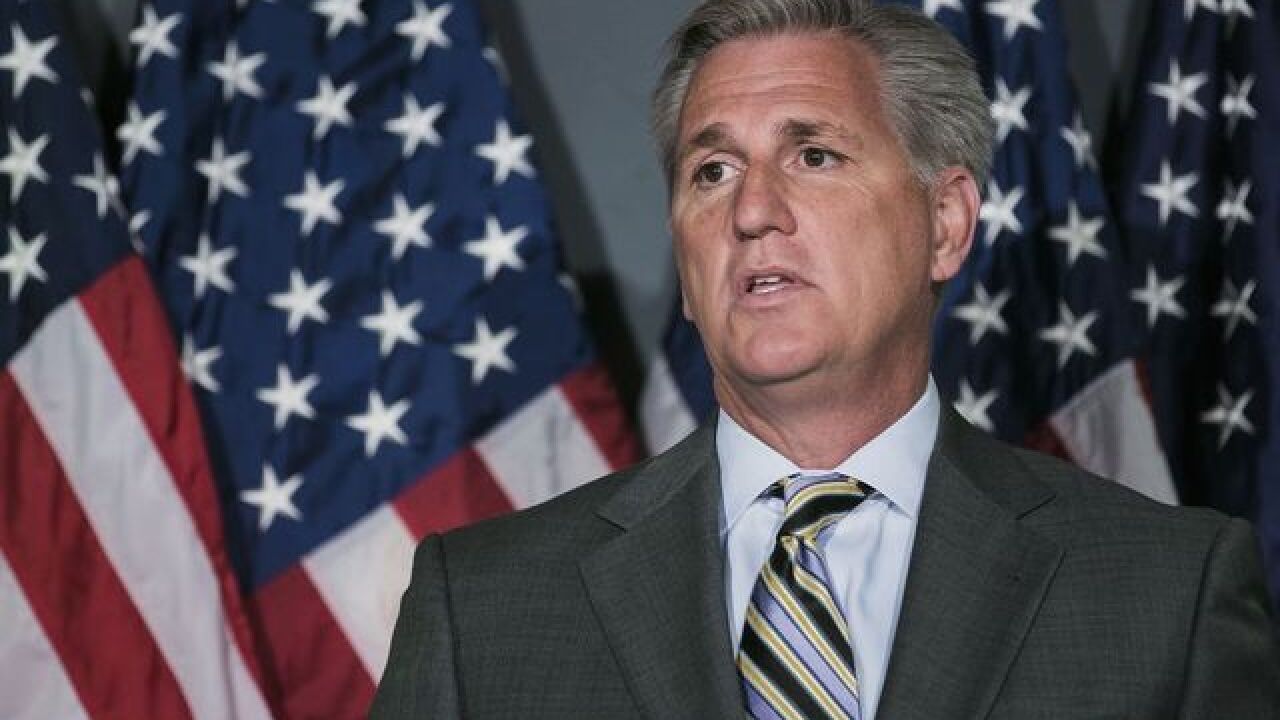 Rep. Kevin McCarthy was elected House minority leader Wednesday, according to members of Congress in the closed-door meeting where the elections took place, meaning the California Republican will lead House GOP members after Speaker Paul Ryan leaves Capitol Hill at the end of his term in January.

With Ryan headed for the exit s, McCarthy, the current No. 2 House Republican, was long viewed as the heavy favorite to become minority leader in the new Congress, the highest-ranking GOP leadership post with Republicans in the minority after losing control of the House of Representatives in the 2018 midterms.

McCarthy faced a long-shot challenge from Rep. Jim Jordan, the co-founder of the conservative Freedom Caucus, but the California Republican is expected to prevail in his bid to become minority leader. Ryan announced in April that he would not seek re-election and has endorsed McCarthy , the House majority leader for the past four years, to be his successor.

Trump and McCarthy have spoken about leadership races recently, territory that Presidents usually avoid so not as to seem like they're alienating members of their own party. In private conversations, Trump has pushed for Jordan and another close conservative ally -- Rep. Mark Meadows of North Carolina -- to have the top Republican positions on key committees, according to a source familiar. McCarthy doesn't dole out those positions-- that's for the House GOP Steering Committee -- but plenty of people on the Steering Committee are loyal to McCarthy and would heed his word. As of Wednesday afternoon it was not clear where Jordan or Meadows would land.

A separate source confirmed to CNN that Jordan is interested in ranking member position on Judiciary Committee in order to check Democratic investigations that will be led by Rep. Jerry Nadler of New York. Politico first reported Wednesday that Trump has privately pushed McCarthy to make a deal with Jordan.

McCarthy has also positioned himself as a close ally of Trump and a leader who can help Republicans win back control of Congress. In a letter announcing his bid for minority leader, he wrote, "We need to lay the groundwork to regain the majority so that we can continue working alongside President Trump to fulfill our promise to fundamentally change Washington. I helped build a majority from a deeper hole than this and I have what it takes to do it again."

Jordan, meanwhile, has pitched himself as a leader who could help defend the President against what is expected to be aggressive Democratic-led oversight efforts.

"You stand up for the truth. You stand up and defend the White House and the President," Jordan told CNN in a recent interview after being asked how House Republicans can counter a Democratic majority pursuing oversight of the President and the administration.

Rep. Scott Perry of Pennsylvania, a member of the Freedom Caucus, said on Tuesday that he plans to vote for Jordan and argued that House Republicans need a change over the status quo if they want to win back the majority.

"Unless we want to keep on losing races then we ought to consider doing something different than what we've been doing," Perry said. "I don't want to keep doing the same dumb things that we're doing and lose races."

Whoever wins out as minority leader will become the most visible face of opposition to the incoming Democratic majority. The next minority leader will also have to decide whether and when the GOP minority might work to find common ground with Democrats and could also come under increased scrutiny from the President as the administration itself goes under a microscope in the new Democrat-controlled Congress.

The leadership election comes as incoming freshmen, fresh off of their election wins last week, are in town for new member orientation. Dan Meuser, a member-elect from Pennsylvania, said he's spoken with both men over the weekend about their plans for the next two years, and he hasn't made a decision.

"I've gotten close with Kevin McCarthy. I think very highly of him. I think he's a very good conservative, showed up a lot of leadership. He certainly earned the position," Meuser told reporters on Tuesday. "On the same note, I think Jim Jordan is a smart, tough, focused individual. So I respect him as well. We'll see over the next couple of days."

Next in line for the GOP leadership hierarchy in the new Congress is Rep. Steve Scalise, the current No. 3 House Republican, who is vying for the position of minority whip in the new Congress. Scalise, as majority whip, gained a higher national profile after he was injured last year in a shooting during a Republican congressional baseball practice. Scalise is not facing a challenge for the position.

Rep. Liz Cheney, the daughter of former Vice President Dick Cheney, is running unopposed for the position of Republican conference chair, the third-ranking position in the leadership hierarchy with Republicans in the minority. The position is currently held by Rep. Cathy McMorris Rodgers, but she is not seeking re-election to the post.

This story has been updated and will continue to update with additional developments.