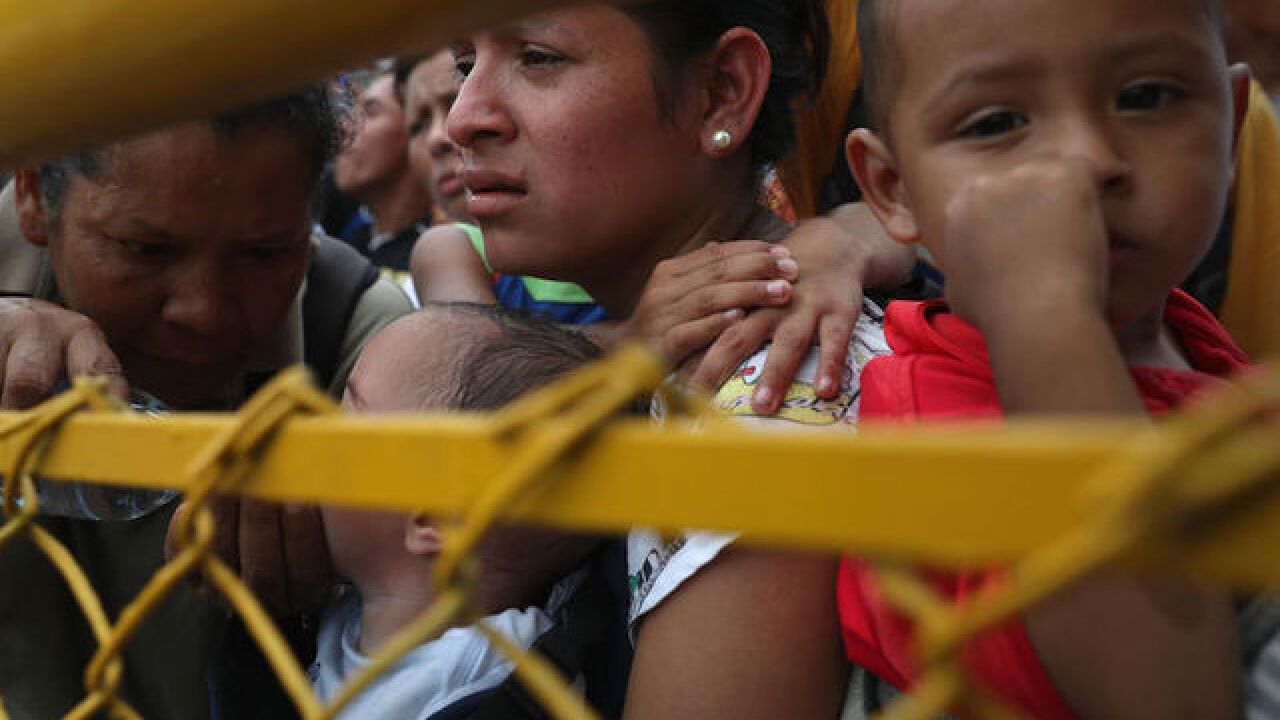 Image copyright 2018 Getty Images. All rights reserved. This material may not be published, broadcast, rewritten, or redistributed.
John Moore
<p> A family in the migrant caravan waits at a gate separating Guatemala from Mexico on October 19, 2018 in Ciudad Tecun Uman, Guatemala. </p>

SAN DIEGO (AP) -- President Donald Trump ordered Friday that anyone who enters the U.S. illegally from Mexico by going around official border crossings is ineligible for asylum.

His edict takes aim at the cherished principle of asylum, which grants haven to people who flee persecution on grounds of race, religion, nationality, political opinion and other factors.

Illegal border crossings are low compared to the 1980s, 1990s and 2000s but there's no question the asylum system is under severe strain.

Here are questions and answers about the new rules:

What does the new ban do?

The president is denying asylum to people who enter the country from Mexico without going through official border crossings, effective Saturday.

That means people can keep claiming asylum if they present themselves to U.S. authorities at any of the 26 border crossings with Mexico. But it's now banned anywhere else along the border.

For example, tens of thousands of immigrants in recent years have been showing up in the Arizona desert or crossing the Rio Grande in Texas and then turning themselves in to border agents and seeking asylum. Under the new rules, those immigrants will now face steep barriers to getting in the country -- and deportation in many cases.

The government says about 70,000 people who went around official crossings in the fiscal year that ended Sept. 30 sought asylum. Another 24,000 presented themselves to U.S. inspectors.

Why does the administration say the asylum system is in crisis?

The United States fielded 331,700 asylum claims last year, nearly double from two years earlier and surpassing Germany as highest in the world, according to the UN Refugee Agency. Many are families and young children fleeing gangs and poverty in Guatemala, Honduras and El Salvador.

The surge has contributed to an enormous backlog in immigration courts, which is where asylum cases must be decided if the applicant passes an initial screening. The backlog has more than doubled to 1.1 million cases in about two years, Syracuse University's Transactional Records Access Clearinghouse reported this week.

Asylum seekers are often released, many with ankle monitors, while their cases wind through court for years. The Trump administration calls it "catch and release" and notes that, while about 8 of 10 asylum seekers pass the initial screening, known as a "credible fear" interview, most are ultimately unsuccessful in court.

There are many reasons why the courts are broken. Immigrant advocates point to a shortage of judges.

Almost immediately, the American Civil Liberties Union sued over the president's order in federal court in San Francisco, seeking to declare it invalid and stop it from going into effect while litigation is pending.

Trump is invoking the same extraordinary powers he used to ban travel to the U.S. from several predominantly Muslim countries, which was upheld by the Supreme Court in June. Under a section of federal immigration law, the president may deny entry to "any class of aliens" whose presence is deemed "detrimental to the interests of the United States."

But under the Immigration and Nationality Act, anyone can apply for asylum no matter how or where they enter the country. And the 1951 United Nations Refugee Convention, of which the U.S. is a signatory, says people may apply for asylum even if they enter a country illegally.

Administration officials argue that U.S. law already has some bars on asylum -- being part of a terrorist organization or having committed a serious crime, for example -- and that "withholding of removal" and protection under the U.N. Convention Against Torture.

The administration also emphasizes that people can still seek asylum at official crossings instead of entering the country illegally by going around them, but that poses logistical challenges. Asylum seekers currently wait in Mexican border cities -- up to five weeks in Tijuana -- because inspectors at U.S. crossings say they don't have the capacity to process their claims.

What will happen to the immigrants?

Under the new rule, immigrants caught crossing the border and seeking asylum will be transported to a nearby port of entry and denied asylum if they seek it.

They will be allowed to seek other, more limited forms of protection but the initial screening, known as a "reasonable fear" interview, is much harder to pass. And these variations of asylum -- "withholding of removal" and protection under the U.N. Convention Against Torture -- don't offer a path to a green card or allow for family members to come.

If they don't clear this step, immigrants will be detained and put into deportation proceedings.

But this creates other issues. There is limited jail space to detain immigrants, along with several hurdles to deport immigrants back to Central America. In addition, child immigrants seeking asylum have different sets of protections that will complicate the process even more.

And it's too early to tell if the ban will affect caravans of Central American immigrants that have drawn the wrath of the president as they slow make their way to the U.S. If they opt to show up at a port of entry like previous caravans did, then the new rules won't restrict them from seeking asylum here.