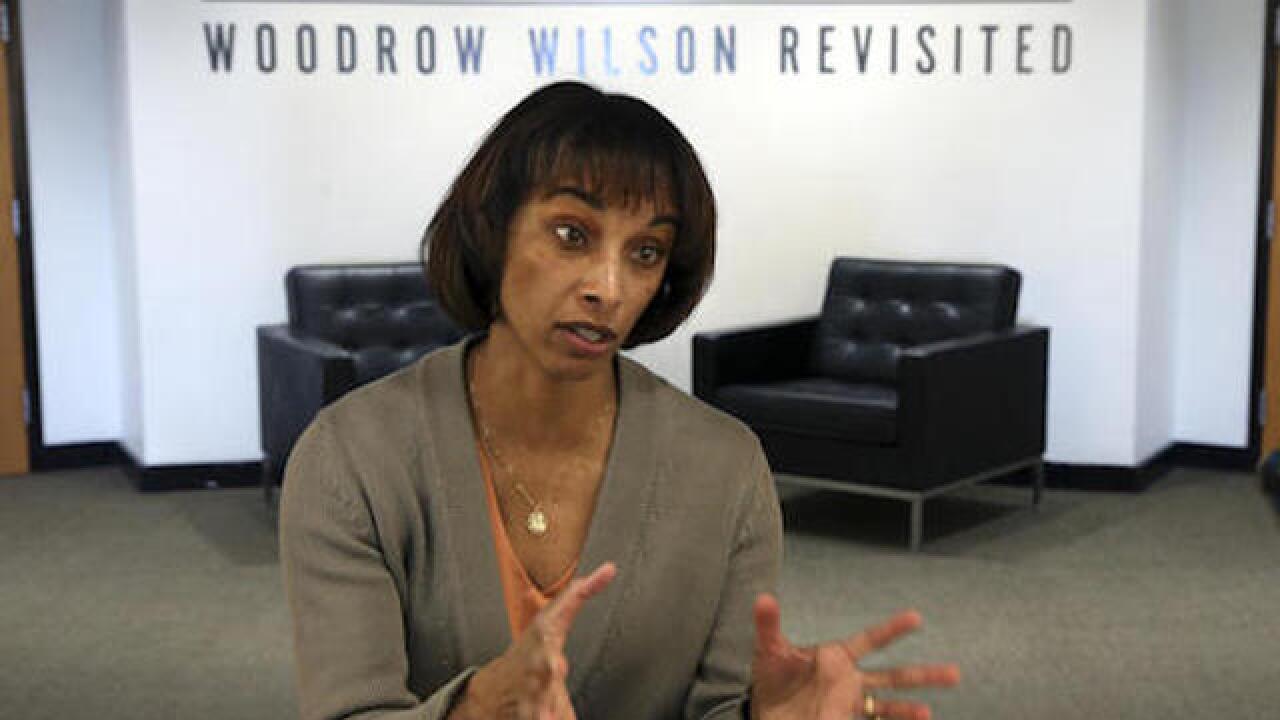 Copyright Associated Press
Mel Evans
<p>Cecilia Rouse, Dean of the Woodrow Wilson School of Public and International Affairs, answers a question as she sits near an exhibit titled, "In the Nation's Service? Woodrow Wilson Revisited," Sunday, April 3, 2016, at the school in Princeton, N.J. As Princeton University officials weigh whether to remove alumnus and former President Woodrow Wilson's name from its public policy school, the college is launching an exhibit meant to more fully air his legacy. (AP Photo/Mel Evans)</p>

PRINCETON, N.J. (AP) — Woodrow Wilson's name will remain on Princeton University's public policy school, despite calls to remove it because the former U.S. president was a segregationist, the Ivy League university announced Monday.

Princeton was challenged to take a deeper look into Wilson's life in the fall, when a group of students raised questions about his racist views and their impact on his policy. The Black Justice League held a 32-hour sit-in inside the Princeton president's office, demanding Wilson's name be removed from programs and buildings, including the Woodrow Wilson School of Public Policy and International Affairs, and for other changes to be made on campus to make the university more diverse and inclusive.

The school has borne Wilson's name for more than eight decades. It will remain, but Princeton pledged to adopt other changes, including establishing a pipeline program to encourage more minority students to pursue doctoral degrees and diversifying campus symbols and art.

But he also supported segregation — including in the federal government — rolling back progress for the emerging black middle class in the nation's capital.

The debate over Wilson's name was part of a wave of racially motivated activism on college campuses across the country this school year that began with protests at the University of Missouri. There, black students — including members of the school's football team — successfully protested for the ouster of Missouri's president.

In recent months, college leaders have moved to change mascots, building names, mottos and other symbols some have deemed offensive or outdated. Most recently, Harvard University has taken steps to remove university references tied to slavery.

Princeton created a website that included input from nine Wilson scholars and biographers, and received more than 600 submissions from Princeton alumni, faculty and the public. The program changes were recommended by a 10-member committee that met about a dozen times between December and March.

The board of trustees' decision comes on the same day that the school launches an interactive exhibit putting Wilson in context for his era while emphasizing that he was a man apart from it — for better and worse. "In the Nation's Service? Wilson Revisited" will run through Oct. 28. An interactive version is also available online, inviting viewers to tweet their reactions.

"What we were trying to do here is take the line that separates 'Wilson good' and 'Wilson bad' and expand it," said Daniel Linke, archivist at the Seeley G. Mudd Manuscript Library at Princeton and curator of the exhibit. "There's a nuanced debate to be had. He's still affecting us today."

Kristen Coke and Jameil Brown enrolled at the Wilson school not knowing much about the school's namesake aside from his oft-touted positive accomplishments, from his record during his two terms as a U.S. president to the changes he made as the university's president to elevate the school's stature.

It wasn't until their junior year that they began to learn more about his views toward African-Americans and women. Now seniors, both students were among the first to see a new exhibit Princeton launched Monday that will more fully explore who Wilson was — openly and publicly acknowledging his bigotry alongside the progressivism for which he is so revered.

"When we were freshmen here, there definitely was not really any conversation about what Woodrow Wilson's legacy was as a whole," said Coke, 21, who is black. "There's lots of things that we do here on campus to exalt his name. ... When I started critically looking at his legacy, it made me start to think, 'Who are we celebrating?'"

Cecilia Rouse, dean of the Wilson School, said the students have opened a helpful dialogue that is part of a national conversation.

"It's important for students to understand great people are complicated," said Rouse. "Rarely is someone black or white. We have to learn to live with that complexity. It's what we're grappling with on campuses across the country. We can sandblast a name from the building, but to actually change how we operate, and what our community is like is much harder."

Wilson is credited with creating the Federal Reserve system, led the U.S. into World War I and tried to preserve a lasting peace.

But his faults are laid bare from the beginning of the exhibit. One states plainly: "Among Wilson's most serious failings was his racism and the damage it did to individual lives at home and abroad." Another quotes him in his own words: "Segregation is not a humiliation but a benefit, and ought to be so regarded by you gentlemen."

Particularly illuminating is a panel of quotes from his contemporaries, who single him out for his prejudices during his lifetime. Pioneering black journalist Ida B. Wells said of Wilson that segregation "has been given a new meaning and impetus under President Wilson, and members of the (black race) have been snubbed, degraded and humiliated during this administration as never before since freedom."