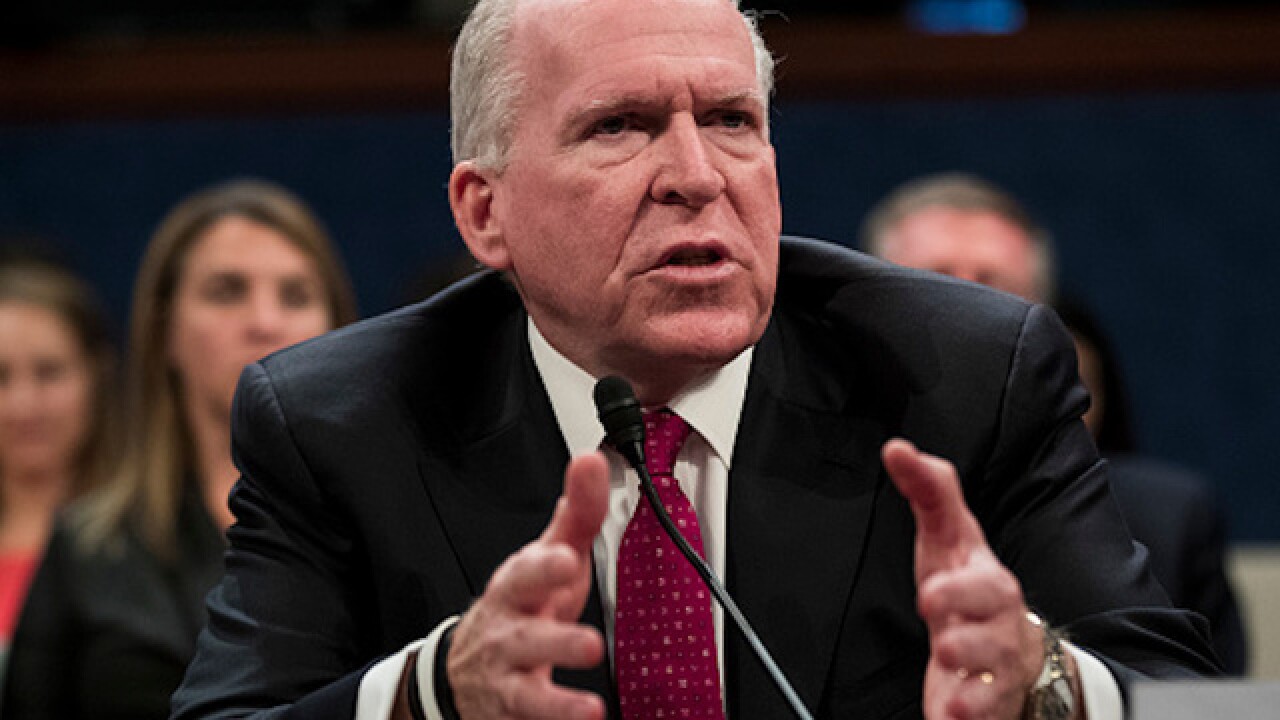 Copyright 2018 Scripps Media, Inc. All rights reserved. This material may not be published, broadcast, rewritten, or redistributed.
Drew Angerer
<p>WASHINGTON, DC - MAY 23: Former Director of the U.S. Central Intelligence Agency (CIA) John Brennan testifies before the House Permanent Select Committee on Intelligence on Capitol Hill, May 23, 2017 in Washington, DC. Brennan is discussing the extent of Russia's meddling in the 2016 U.S. presidential election and possible ties to the campaign of President Donald Trump. (Photo by Drew Angerer/Getty Images)</p>

"As the head of the executive branch and commander in chief, I have a unique constitutional responsibility to protect the nation's classified information, including by controlling access to it. Today, in fulfilling that responsibility, I have decided to revoke the security clearance of John Brennan, former director of the Central Intelligence Agency," she said.

In July, the White House announced that it was considering taking such action, which amounts to an unprecedented use of presidential authority to punish political rivals. At the time, critics quickly seized on the announcement, even as those under consideration downplayed the effect losing their clearances might have.

Sanders' statement Wednesday cited the CIA's infiltration of Senate computers during Brennan's time at the helm of the agency as a reason for the decision, adding that Brennan has "recently leveraged his status" as a former official to "make a series of unfounded allegations" about the administration, which she called "increasingly frenzied commentary."

"Such access is particularly inappropriate when such officials have transitioned into highly political positions," she read.

It’s astounding how often you fail to live up to minimum standards of decency, civility, & probity. Seems like you will never understand what it means to be president, nor what it takes to be a good, decent, & honest person. So disheartening, so dangerous for our Nation. https://t.co/eI9HaCec1m

You’re absolutely right. If you were “presidential,” you would focus on healing the rifts within our Nation, being truthful about the challenges we face, & showing the world that America is still that shining beacon of freedom, liberty, prosperity, & goodness that welcomes all. https://t.co/zRHRYAFEAo

What responsible & right-thinking adult can point to @realDonaldTrump as a role model for our youth? Whenever he spews lies, insults, and polarizing hate speech against fellow Americans, think of its harmful impact on our young people and the way they talk, act, & treat others. https://t.co/S8sPpydvt9

Individuals of conscience who believe in rule of law should denounce this blatant effort to obstruct justice. As Mr. Trump’s desperation to protect himself grows, he could turn words into actions, prompting a Constitutional crisis. Congress must warn Trump of dire consequences. https://t.co/VUU9M2WcYZ

Sanders defended the decision to revoke Brennan's security clearance as one aimed at fulfilling the President's "constitutional responsibility to protect classified information."

"The President has a constitutional responsibility to protect classified information and who has access to it and that's what he's doing is fulfilling this responsibility," Sanders said.

Sanders said this was not an attempt to silence the President's critics, but had no readily available answer when asked why former Trump national security adviser Michael Flynn, who has admitted to lying to the FBI, still maintains his security clearance.