Portland braces for dueling protests: What we know 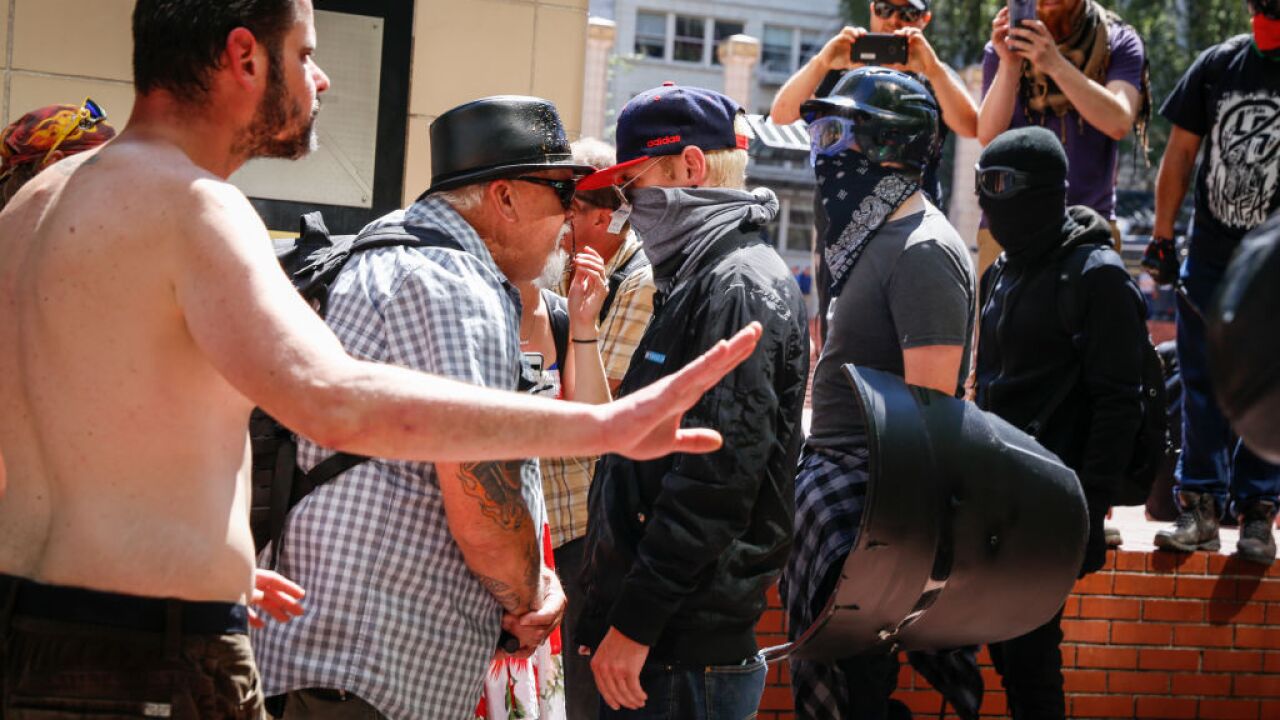 Multiple far-right and extremist groups plan to protest in Portland, Oregon, this weekend where they may come face to face with anti-fascist counterdemonstrators.

The city's mayor has asked people to stay away, while police are preparing operational plans in case they need to intervene.

Here's what we know:

A gathering is being planned by a man called Joe Biggs, who used to work for Infowars, the fringe media company run by a right-wing conspiracist. Biggs has posted he wants the protest to "put an end to domestic terrorism," specifically left-wing anti-fascist extremists known as Antifa. The group is set to gather in downtown Portland.

Who's expected to attend

There are fears that the rally will attract many right-wing extremists, as well as Antifa counter-protests.

Heidi Beirich, director of the Intelligence Project at the Southern Poverty Law Center, warned there could be a gathering of what she called "our most scary extremist groups" -- like the Proud Boys, followers of The Daily Stormer, American Guard, the Three Percenters and the Oath Keepers. The SPLC, which monitors extremist activity across the US, says the groups are a mix of white supremacists, neo-Nazis and anti-government militias.

The Oath Keepers, an anti-government group associated with the militia movement, said on its website it would not be attending as a group. It would continue to oppose Antifa, a statement added.

Beirich calls the likely attendees a "combustible mix" of groups similar to those that gathered in Charlottesville, Virginia, two years ago when demonstrations became violent and deadly.

Opposing the groups is expected to be Portland's Rose City Antifa, which Beirich describes as "aggressive." In its own statement on the event, the group is saying "no matter how violent their threats are: we will defend ourselves and our community."

Why there are fears of violence

Biggs is known for his extreme rhetoric against Antifa members, the often black-clad left-wingers who maintain they are fighting fascism and often crash far-right events.

He has posted on Twitter: "DEATH TO ANTIFA" and "Get a gun. [Buy] ammo. Get your gun license. Get training. Practice as much as you can and be ready because the left isn't playing anymore and neither should we." His account was recently suspended by Twitter for repeatedly violating its terms of service.

Recently, in the Facebook group for the event, Biggs has toned down his language -- urging attendees not to arrive in helmets, but have them ready just in case. Some commenters have said they are ready to defend themselves or "to do battle."

On the opposing side, Rose City Antifa posted a call to "defend Portland against far-right attack."

On a Facebook page encouraging people to demonstrate, the group says they believe the city is a target "for right-wing attacks precisely because it is a symbol of progressive values."

The city has become the scene of violent protests in recent years.

Portland's police chief Danielle Outlaw said that since becoming chief in 2017, she has seen the city, historically a place for peaceful protest and advocacy, undergo a change.

"Now we're seeing an increase of planned brawls, planned fights where you have opposing sides coming together, meeting in the city of Portland in specific areas for the sole purpose of fighting over ideological differences," she said in a podcast on the Portland Police website.

The most recent high-profile clash was on June 29 when three people were arrested and eight people injured, including at least three police officers, during violent demonstrations that included anti-fascist groups and members of right-wing organizations including the Proud Boys, CNN affiliates KOIN and KATU reported. Andy Ngo, a journalist for a conservative website, was among those caught up in the violence and blamed Antifa protesters for the attack, and says on Twitter that they took credit for the attack. Rose City Antifa denied that claim on Twitter, saying they have not claimed responsibility for the attack. Portland's mayor says an investigation into the attack is ongoing.

Why it's happening now

Biggs said he organized the event to counter Antifa, specifically mentioning the attack on Ngo in Portland in June.

Politicians have made similar calls regarding Antifa. Republican Sens. Ted Cruz and Bill Cassidy have introduced legislation to have Antifa groups condemned as "domestic terrorists." President Donald Trump tweeted that consideration was being given to the idea.

The demonstrations this weekend come two years after the Unite the Right rally in Charlottesville turned violent and just two weeks after authorities say a man slaughtered 22 people in El Paso, Texas, in an outpouring of his hate toward Mexicans.

What the city is doing

Law enforcement and local officials have told people to stay home and avoid the event, and issued strongly worded statements that hate and violence are not welcome in Portland.

Mayor Ted Wheeler tweeted : "A message to anyone who plans on using Portland on August 17th to commit violence and spread hate: We. Don't. Want. You. Here. Stop using our beautiful city and our home to spread fear and disrupt our lives."

Police Chief Outlaw said: "We don't condone this. It's not welcome."

Police officials say they are still working on operational plans.

Beirich of the SPLC says the hatred between the left- and right-wing extremists is deeply entrenched in Portland.

"There's been violence for years between anti-racists and racists," she says.

After a knife attack on a Portland train in May 2017, conflict between the groups intensified, she said.

That attack, during which police say the suspect killed two people while ranting racist and anti-Muslim slurs, sparked discussions about the state's ugly history of white supremacy.

Since then, Portland seems to be one of few cities to see these kind of regular battles that bring planned violence to city streets.