Pope to young on Poland trip: Believe 'in a new humanity' 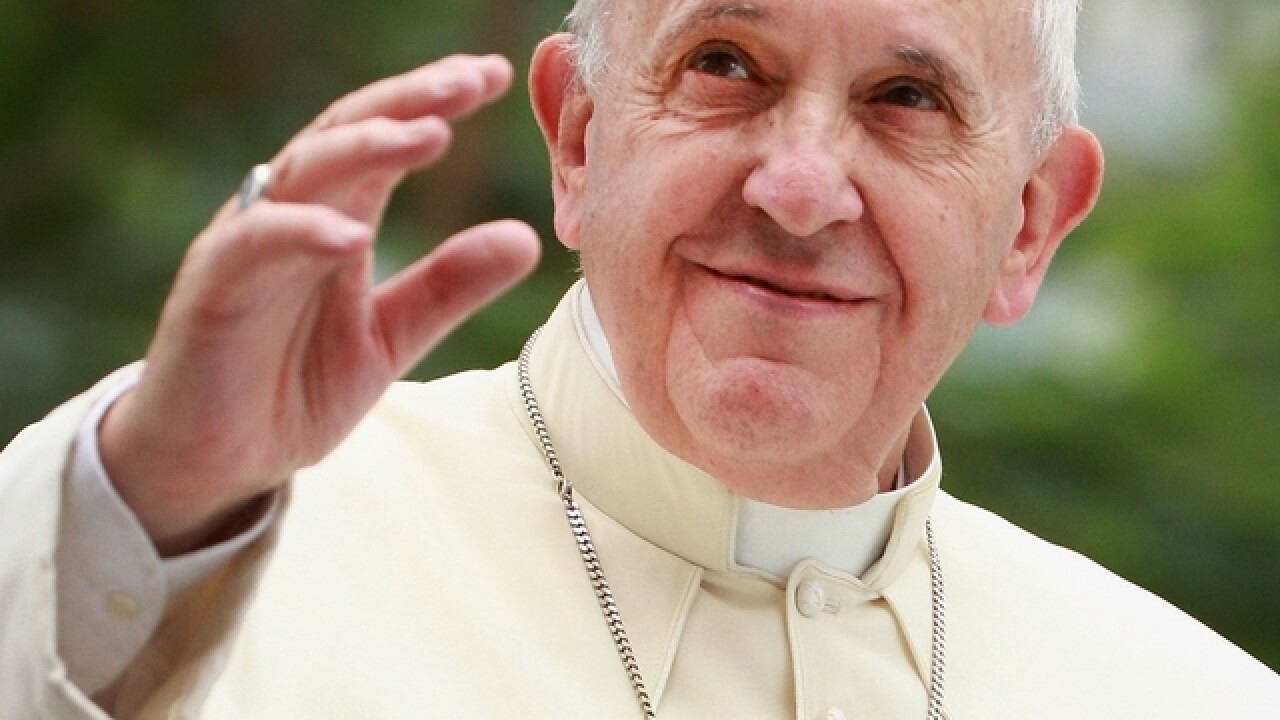 By: Associated Press
Posted at 8:48 PM, Jul 31, 2016
KRAKOW, Poland (AP) — Pope Francis told young people who flocked by the hundreds of thousands to his words Sunday that they need to "believe in a new humanity" stronger than evil, and cautioned against concluding that one religion is more violent than others.
Organizers of the Catholic jamboree known as World Youth Day estimated 1.5 million youths attended his Mass at a meadow near Krakow, many of them having camped out in sleeping bags from a vigil service of prayer, singing and dance performances the previous evening.
The jamboree, meant to infuse young Catholics with fresh passion for their religion, was the main reason Francis came to Poland on a five-trip, which also took him to the former Nazi Auschwitz death camp, where he prayed in silence and reflected on what he called "so much cruelty," and to a church in Krakow, where he prayed that God protect the world from the "devastating wave" of terrorism.
Extremist violence was on his mind when he set out last week, the day after extremists rushed into a church in the French countryside and murdered the elderly priest there, slitting his throat, as he was celebrating Mass.
Flying back to Rome Sunday night from Krakow, he was asked by reporters why he has never used the word "Islam" when denouncing terrorist attacks.
Francis said he thinks "it's not right to identify Islam with violence."
He added that every religion has its "little group of fundamentalists.'" He said that if he speaks of violent Islam, he'd have to speak of violent Catholicism, since Catholics kill, too.
Referring to Isis, also known as Islamic State group, Francis said it "presents itself with its violent identity card, but it's not Islam.'"
Security was very tight throughout the pope's five-day visit, but he encountered huge crowds day after day without incident and arrived back in Rome on Sunday evening.
The pope used his several encounters with the young pilgrims — from mega-gatherings to a private lunch with only a dozen people from five continents — to encourage a new generation to work for peace, reconciliation and justice.
God, said Francis in his final homily of the pilgrimage, "demands of us real courage, the courage to be more powerful than evil, by loving everyone, even our enemies."
"People may judge you to be dreamers, because you believe in a new humanity, one that rejects hatred between peoples, one that refuses to see borders as barriers and can cherish its own traditions without being self-centered or small-minded," Francis told his flock.
Earlier in his pilgrimage, Francis had expressed dismay that many people and places aren't welcoming enough to refugees or those fleeing poverty in their homelands.
After more than 1 million people arrived on Europe's southern shores last year, some nations on the continent, notably in central and eastern Europe, hastily built fences to keep the refugees out. Poland has been among the EU countries that have refused to take in many Muslim refugees, saying it has already welcomed hundreds of thousands of Ukrainian immigrants.
Attending Francis' closing Mass on Sunday were some of Poland's top leaders, including President Andrzej Duda and Jaroslaw Kaczynski, head of the conservative ruling Law and Justice party.
Since the Paris extremist attacks in early 2015, concerns have heightened that the Vatican, and the pope in particular, could be targeted because of his role as the most influential Christian leader. When the pope travels, a corps of Vatican bodyguards travels with him, running alongside his popemobile or scrutinizing crowds along the route.
At Sunday's Mass, several Polish police vans followed the pope's open-sided popemobile as he rode through the wide flat meadow in the middle of hundreds of thousands of pilgrims. Motorcycle police rode close to metal barriers keeping the crowd away.
This pilgrimage marked the first time the native Argentine pope sent foot in Eastern Europe.
Flying back to Rome, he was asked by reporters what he thought about Poland and its welcome to him.
Referring to the enormous crowds he drew day after day in a country where St. Pope John Paul II was born, Francis joked that "Poland was invaded, this time by young people." He apparently was referring to Germany's 1930 invasion of Poland that triggered World War II.
Francis sounded charmed by what he saw, including during his drive a couple hours to the airport in rain that came down in buckets. "This evening, with the rain coming down, along the street there were not only young people but also little old ladies," the pope said, referring to the crowds cheering him as he rode by.
During Mass, Francis announced the next World Youth Day will take place in Panama in 2019. Later, the 79-year-old pope told rally volunteers he did not know if he would be at that one.
Copyright 2016 The Associated Press. All rights reserved. This material may not be published, broadcast, rewritten or redistributed.