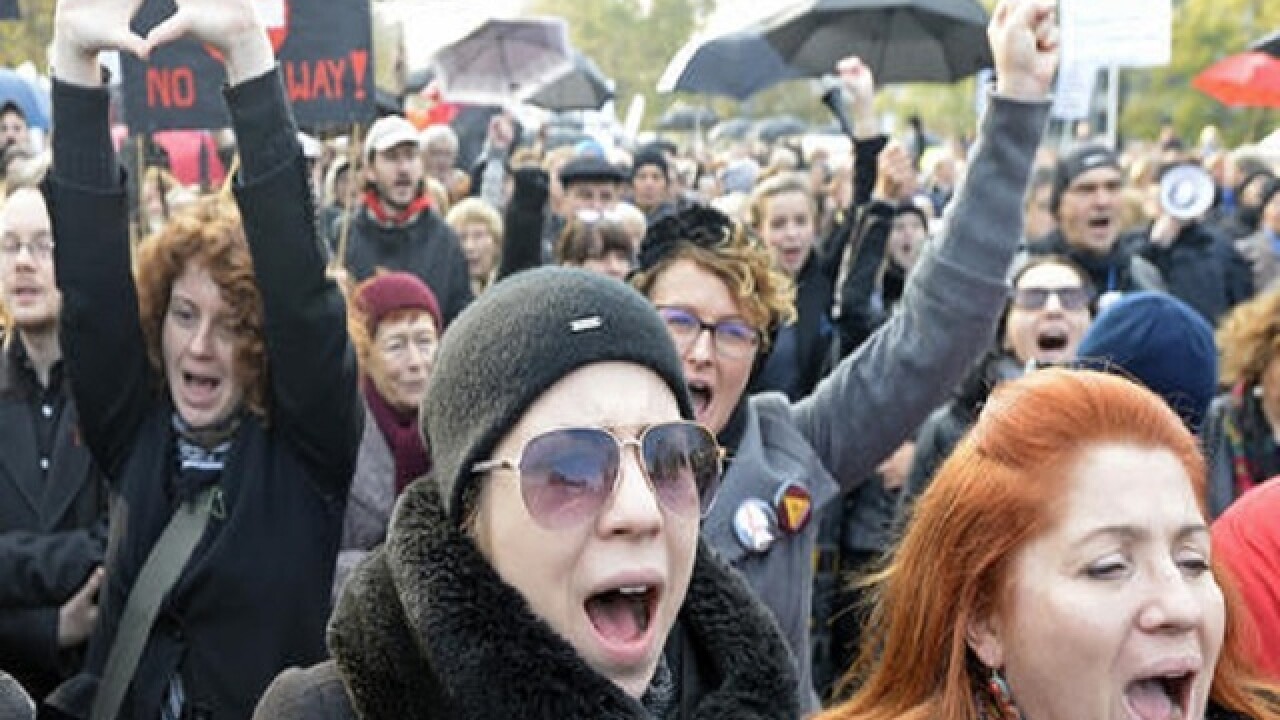 Alik Keplicz
<p>Protesters shout slogans during a rally in front of the parliament in Warsaw, Poland, Sunday, Oct. 23, 2016. Polish women again donned black and took to the streets on Sunday, launching another round of protests against efforts by the nation's conservative leaders to tighten Poland's already restrictive abortion law. (AP Photo/Alik Keplicz)</p>

WARSAW, Poland (AP) — Polish women put black clothes back on and returned to the streets Sunday, launching another round of protests against efforts by the nation's conservative leaders to tighten Poland's already restrictive abortion law.
A large group gathered outside the parliament building in Warsaw, decrying the Catholic Church's influence on political life and chanting "We have had enough!" Similar protests took place in other cities across the country.
The street protests are expected to have their culmination on Monday, when some women are also planning a strike, boycotting jobs and classes.
Similar protests took place three weeks ago against a proposal for a total ban on abortion. Lawmakers rejected that proposal after massive crowds of women dressed in black staged streets protests under their umbrellas in the rain.
The latest round of demonstrations, held under the slogan "We are not folding up our umbrellas," was organized in response to a new proposal that would fall short of a total ban, but outlaw abortions in cases where fetuses are unviable or badly damaged.
Jaroslaw Kaczynski, the head of the ruling Law and Justice party, said recently he wants a new law that would ensure that women carry their fetuses to term even in cases of Down syndrome or when there is no chance of survival. The move would allow for baptisms and burials, Kaczynski said.
His socially conservative party won parliamentary and presidential elections last year with the support of Poland's powerful Roman Catholic church, Catholic media outlets and religious voters. Many observers see the attempts to further restrict abortion as a way for the party to re-pay its debt to its religious base.
However, the proposals have proven too restrictive for many Poles, including some who voted for the party.
Abortion was legal and easily available under communism in Poland, but after communism's fall in 1989 the country re-embraced many of its Catholic traditions. The current law, passed in 1993, bans most abortions, with exceptions only made in cases of rape, if the mother's life or health is at risk, or if the fetus is irreparably damaged.
In many cases, however, doctors have declared themselves conscientious objectors to abortions and refuse to perform them even in those cases.
Official statistics show there were 1,040 legal abortions in Poland last year, although many more abortions are known to take place, with women or traveling to neighboring countries for the procedure or ordering abortion-inducing pills online.
Copyright 2016 The Associated Press. All rights reserved. This material may not be published, broadcast, rewritten or redistributed.