Philippine police van rams protesters in front of US Embassy 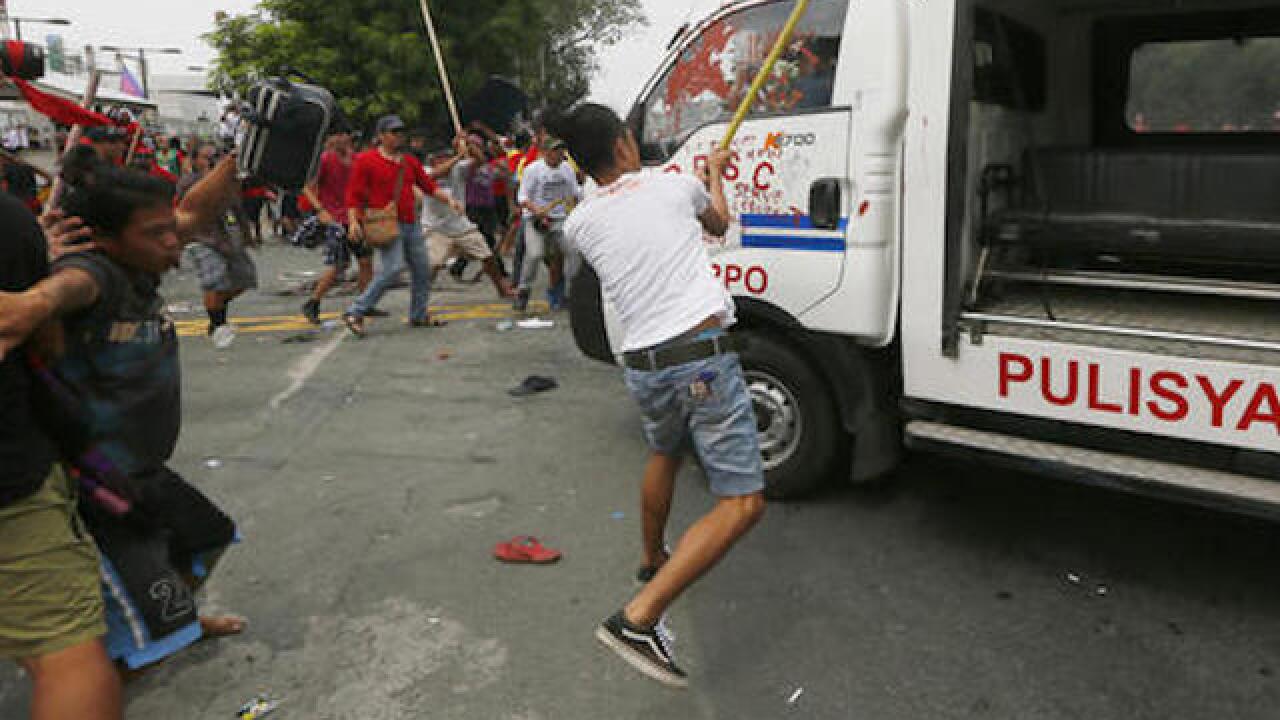 Copyright Associated Press
Bullit Marquez
<p>Protesters hit a Philippine National Police van after it rammed into protesters outside the US Embassy in Manila, Philippines injuring an undetermined number Wednesday, Oct. 19, 2016. Hundreds of marching protesters forced their way closer to the US Embassy but was blocked by police. The protesters led by Indigenous Peoples, are opposing alleged US meddling in Philippine domestic affairs and to express support for President Rodrigo Roa Duterte’s independent foreign policy by breaking away from decades-old unequal relations with the US.(AP Photo/Bullit Marquez)</p>

At least three student activists had to be taken to a hospital after they were ran over by the van driven by a police officer, protest leader Renato Reyes said.

Associated Press TV footage showed the van repeatedly ramming the protesters as it drove wildly back and forth after activists surrounded and started hitting the vehicle with wooden batons they seized from police.

In front of horrified crowds, including videojournalists and photographers, the van suddenly charged backward then sprinted forward twice over a space of about 20 meters (60 feet), barreling through the scattered protesters and hurtling some to the side like bowling pins. A few got ran over but somehow managed to stand.

Some screamed in surprise, others hurled stones at the van and yelled invectives. A speaker called the police "puppies of imperialists" on a loudspeaker.

"There was absolutely no justification for it," Reyes said of the violent police dispersal of about 1,000 protesters. "Even as the president vowed an independent foreign policy, Philippine police forces still act as running dogs of the U.S."

Police lobbed tear gas and arrested at least 23 protesters who broke through a line of riot police and hurled red paint at the officers and a U.S. government seal at the start of the rally at the seaside embassy compound.

A firetruck doused the rowdy protesters with water to push them back, but they took hold of the water hose and confronted the outnumbered police with rocks and red paint. After breaking through the police corridor, they scribbled "U.S. troops out now" and other slogans at the embassy's tall fence with red paint.

The protesters, consisting of students, workers and tribespeople, were demanding an end to the presence of visiting U.S. troops in the Philippines and to support a call by President Rodrigo Duterte for a foreign policy not dependent on the U.S., the country's longtime treaty ally.

The activists came from the largest left-wing umbrella group called Bayan (Nation), which has organized regular anti-U.S. protests in front of the embassy for decades, most of which are peaceful.

Duterte was on a state visit to China, where he is seeking to repair relations strained under his predecessor over territorial conflicts in the South China Sea. He is also seeking to expand two-way trade and investments and financing for badly needed infrastructure projects.

Amid an uneasy relationship with the U.S., Duterte has tried to reach out to China and Russia, bringing uncertainty to his country's long alliance with America.

But the protesters also opposed the president's effort to lean toward China. "The Philippines will not be dictated on, whether by the U.S. or China," they said in a statement.

The Philippine National Police did not comment immediately Wednesday.

The violence happened as the police and Duterte are under increased international scrutiny for their alleged role in the killings of thousands of drug suspects and pushers as part of the president's war on illegal drugs.