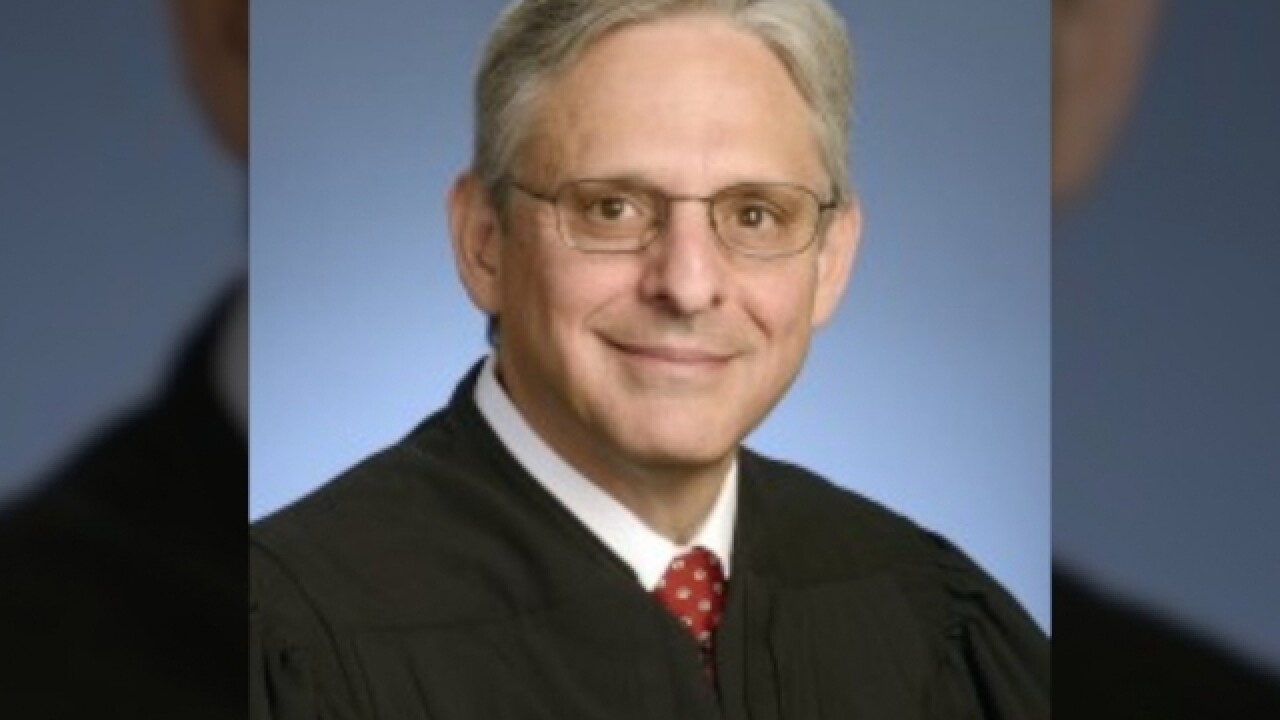 Obama said Garland would bring a spirit of modesty, integrity and even-handedness to the Supreme Court.

Garland, 63, is the chief judge for the United States Court of Appeals for the District of Columbia Circuit, a court whose influence over federal policy and national security matters has made it a proving ground for potential Supreme Court justices.

Obama said he went through a rigorous and comprehensive process to pick his nominee. He said he sought to set aside short-term expediency and "narrow politics."

Garland would replace conservative, Justice Antonin Scalia, who died last month, leaving behind a bitter election-year fight over the future of the court.

The White House and members of Congress confirmed Obama's choice ahead of the president's 11 a.m. announcement in the White House Rose Garden.

White House officials said Obama believes Garland has a record of bipartisan support and was best poised to serve on the court immediately.

Garland was confirmed to the D.C. Circuit in 1997 with backing from a majority in both parties, including seven current Republicans senators.

Sen. Chuck Schumer of New York, the No. 3 Democratic leader called Garland's section, "a bipartisan choice," adding: "If the Republicans can't support him, who can they support?"

Senate Minority Leader Harry Reid, who spoke to Obama Wednesday morning, said in brief remarks on the Senate floor that Republicans must act on the president's choice. "He's doing his job this morning, they should do theirs," said the Nevada Democrat.

If confirmed, Garland would be expected to align with the more liberal members, but he is not viewed as down-the-line liberal. Particularly on criminal defense and national security cases, he's earned a reputation as centrist, and one of the few Democratic-appointed judges Republicans might have a fast-tracked to confirmation — under other circumstances.

But in the current climate, Garland remains a tough sell. Republicans control the Senate, which must confirm any nominee, and GOP leaders want to leave the choice to the next president, denying Obama a chance to alter the ideological balance of the court before he leaves office next January. Republicans contend that a confirmation fight in an election year would be too politicized.

Ahead of Obama's announcement, the Republican Party set up a task force that will orchestrate attack ads, petitions and media outreach. The aim is to bolster Senate Republicans' strategy of denying consideration of Obama's nominee. The party's chairman, Reince Priebus, described it as the GOP's most comprehensive judicial response effort ever.

On the other side, Obama allies have been drafted to run a Democratic effort that will involve liberal groups that hope an Obama nominee could pull the high court's ideological balance to the left. The effort would target states where activists believe Republicans will feel political heat for opposing hearings once Obama announced his nominee.

For Obama, Garland represents a significant departure from his past two Supreme Court choices. In nominating Sonia Sotomayor and Elena Kagan, the president eagerly seized the chance to broaden the court's diversity andrebalance the overwhelming male institution. Sotomayor was the first Hispanic confirmed to the court, Kaganonly the fourth woman.

Garland — a white, male jurist with an Ivy League pedigree and career spent largely in the upper echelon of the Washington's legal elite — breaks no barriers. At 63 years old, he would be the oldest Supreme Court nominee since Lewis Powell, who was 64 when he was confirmed in late 1971.

Presidents tend to appoint young judges with the hope they will shape the court's direction for as long as possible.

Those factors had, until now, made Garland something of a perpetual bridesmaid, repeatedly on Obama's Supreme Court lists, but never chosen.

But Garland found his moment at time when Democrats are seeking to apply maximum pressure on Republicans. A key part of their strategy is casting Republicans as knee-jerk obstructionists ready to shoot down a nominee that many in their own ranks once considered a consensus candidate. In 2010, Utah Sen. Orrin Hatch called Garland "terrific" and said he could be confirmed "virtually unanimously."

The White House planned to highlight Hatch's past support, as well as other glowing comments about Garland from conservative groups.

In 1988, he gave up a plush partner's office in a powerhouse law firms to cut his teeth in criminal cases. As an assistant U.S. attorney, he joined the team prosecuting a Reagan White House aide charged with illegal lobbying and did early work on the drug case against then-D.C. Mayor Marion Barry. He held a top-ranking post in the Justice Department when he was dispatched to Oklahoma City the day after bombing at the federal courthouse to supervise the investigation. The case made his career and his reputation. He oversaw the convictions of Timothy McVeigh and Terry Nichols, and went on to supervise the investigation into Unabomber Ted Kaczynski.

President Bill Clinton first nominated him to the D.C. Circuit in 1995.

His prolonged confirmation process may prove to have prepared him for the one ahead. Garland waited 2½ years to win confirmation to the appeals court. Then, as now, one of the man blocking path was Iowa Sen. Charles Grassley, argued he had no quarrel with Garland's credentials, but a beef with the notion of a Democratic president trying to fill a court he argued had too many seats.