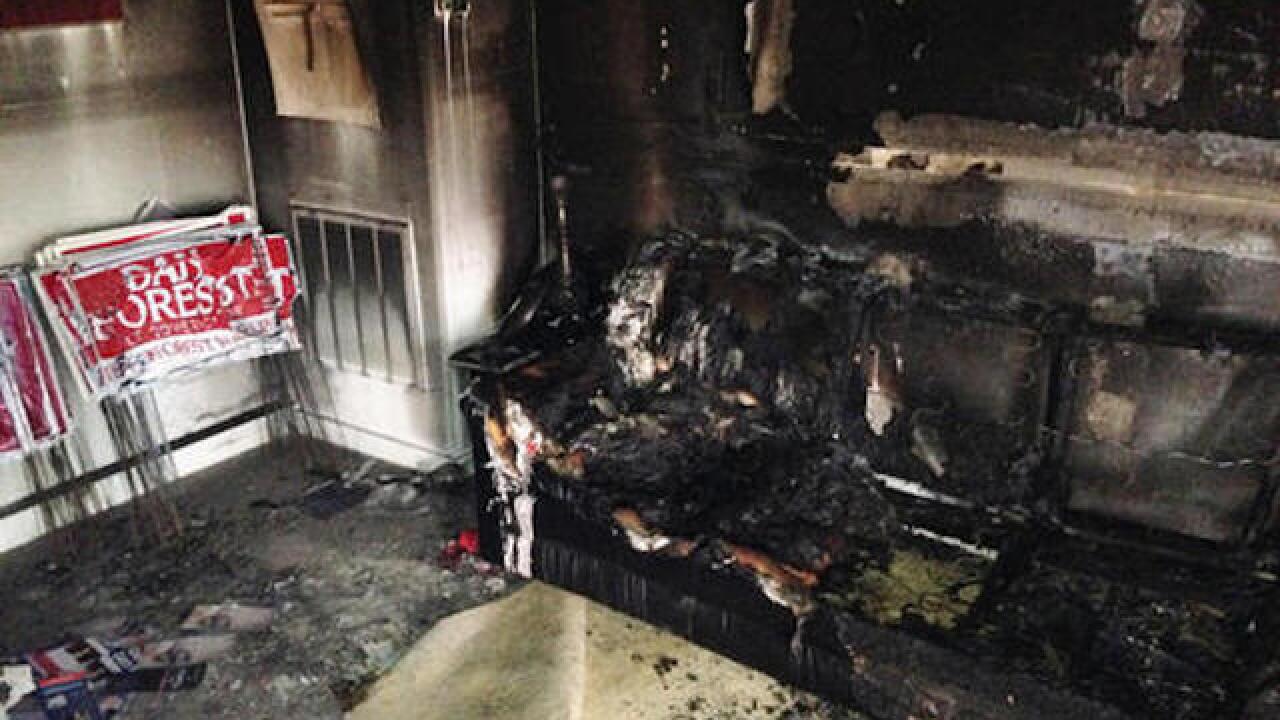 HILLSBOROUGH, N.C. (AP) — Authorities are investigating after a local Republican Party office in North Carolina was set on fire in what a state GOP official called an act of "political terrorism."

A bottle filled with flammable liquid was thrown through the window of the Orange County Republican Party headquarters overnight, according to a Sunday news release from the town of Hillsborough.

The flammable substance that was thrown into the office ignited and damaged the interior before burning out. No one was injured.

In addition to the fire, the news release said an adjacent building was spray-painted with the words: "Nazi Republicans leave town or else."

Another business owner discovered the damage Sunday morning. The Bureau of Alcohol, Tobacco, Firearms and Explosives was working with local investigators.

State GOP executive director Dallas Woodhouse said people sometimes work after-hours and he felt lucky no one was there at the time. He said the bottle appeared to have landed on or near the couch where volunteers sometimes take naps.

"They are working around the clock. It is a miracle that nobody was killed," he said in an interview, calling the fire an act of "political terrorism."

He said Republican offices around the state were re-examining their security.

On Sunday afternoon, the walls of the multi-room office were covered in black char, and a couch against one wall had been burned down to its springs. Shattered glass covered the floor, and melted campaign yard signs showed warped lettering. The graffiti had been covered in paint.

The violent act in the key battleground state was condemned by public figures across the political spectrum.

Hillary Clinton, the Democratic nominee for president, said on Twitter that the attack "is horrific and unacceptable. Very grateful that everyone is safe."

Republican nominee Donald Trump blamed the act on Democrats in a Tweet and he also encouraged local Republicans, saying: "With you all the way, will never forget. Now we have to win. Proud of you all!"

At a news conference, Woodhouse urged Republicans to respond peacefully by turning out to vote in November. He said he'd received messages of support from Democrats.

Orange County GOP chairman Daniel Ashley told reporters no one had previously made violent threats against the office several miles from the town's historic square.

Tom Stevens, mayor of the town about 40 miles northwest of Raleigh, said it was fortunate the fire didn't burn the office and other adjacent buildings that are decades old to the ground.

Stevens, a Democrat, said the act doesn't represent the character of Orange County, which also includes much of Chapel Hill and the University of North Carolina campus. Registered Democrats outnumber Republicans by a 3-1 margin in the county that picked President Barack Obama by a lopsided margin in the 2012 election.

"I'd like to believe we aspire to respect hearing differing views," Stevens said in an interview. "This is very troubling."