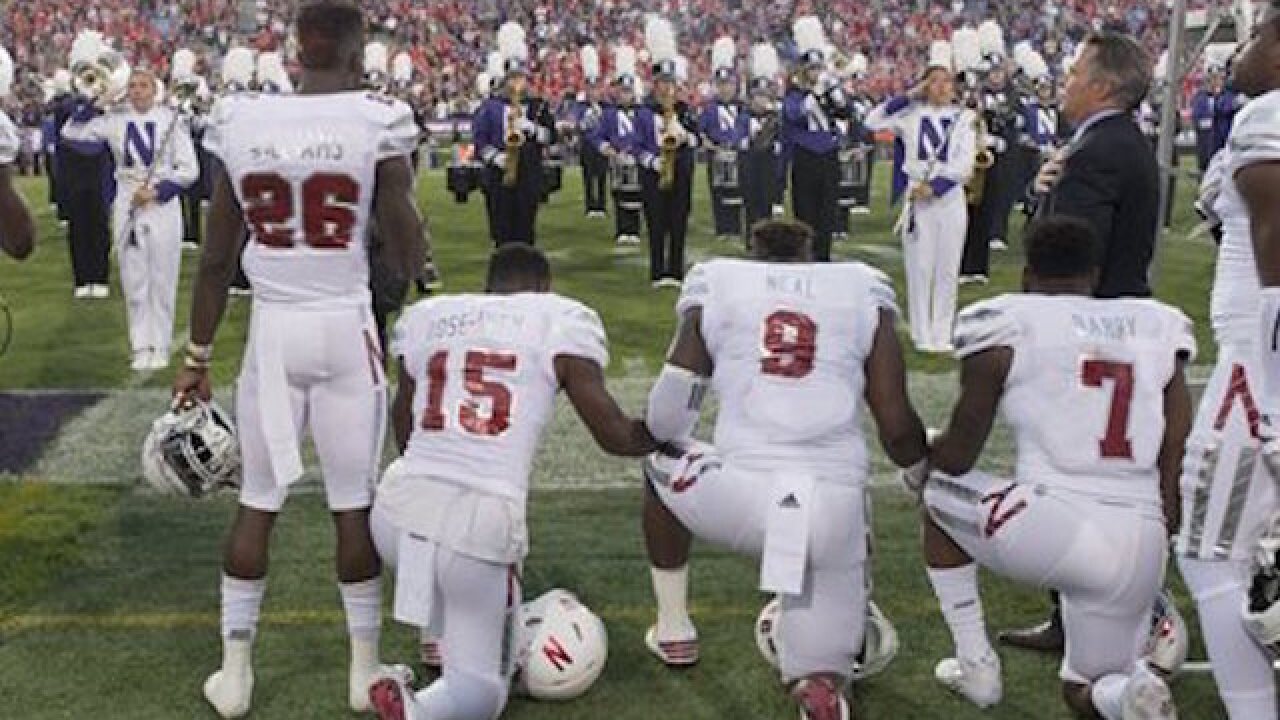 Michael Rose-Ivey, Mohamed Barry and DaiShon Neal each took a knee as the anthem played before last Saturday's game at Northwestern.

"They're wearing a University of Nebraska uniform, and all student-athletes should be aware that their actions reflect not only on themselves but everyone else," Daub said. "It wasn't their forum to take advantage of and use as a Colin Kaepernick cloning situation. Everyone will say the First Amendment gives them the right, but they shouldn't be able to take advantage of the captive market of the football team and the university's reputation."

Daub said he has received a large number of phone calls and emails from the public and that "most of the people I talk to are disappointed and embarrassed."

During the team's media availability on Monday, Rose-Ivey read a statement explaining the reasons why he, Barry and Neal joined Kaepernick, the San Francisco 49ers backup quarterback, and other professional and amateur athletes who have kneeled or otherwise protested unfair treatment of blacks in the United States.

"Generations of men and women have died to give them that right to protest," Ricketts said. "I think the way they chose to protest was disgraceful and disrespectful."

Pillen, who played defensive back for the Huskers from 1976-78, said he's pleased that Rose-Ivey, Barry and Neal feel strongly about a cause. But he said he adamantly opposes how they chose to express themselves.

"I'm a believer in the team above all single or group agendas," Pillen said. "When you place yourself above team, team doesn't work. If there were three other guys who have another cause, and they were also going to use (the game) as a platform... I don't think anybody should put their convictions above team."

Pillen added, "I'm 100 percent behind supporting their critical thinking and taking a stand, and I would encourage them to put their money where it is now and be engaged — but not by taking a knee."

Neither Daub nor Pillen suggested disciplinary action should be taken against the three players.

Daub said that, as a veteran who served in the Army in Korea from 1966-68, he was personally insulted by the anthem protest.

"They're taking advantage of their pretty privileged circumstances as athletes at the university and the scholarships they have," Daub said. "That's not to take away their free speech or their freedom to think and act, but not when they're in uniform."

Rose-Ivey said in his statement that he and his family had received racially charged criticism on social media since Saturday night. He said he also received supportive messages.

Rose-Ivey, Barry and Neal were able to use the Northwestern game as a platform because teams are on the field during the anthem at the Wildcats' stadium. Teams are in the locker rooms during the anthem at Nebraska home games and at many other venues in college football.

Huskers coach Mike Riley said Monday, and again Tuesday on the Big Ten coaches call with reporters, that he supports his players' decision to protest and that Rose-Ivey did "an awesome job" with his statement.

"Mike is a very, very thoughtful person, and I think he's a very aware person," Riley said. "These thoughts obviously didn't come overnight, nor did the actions he used on Saturday."

Riley also said the harsh criticism of Rose-Ivey was unwarranted.