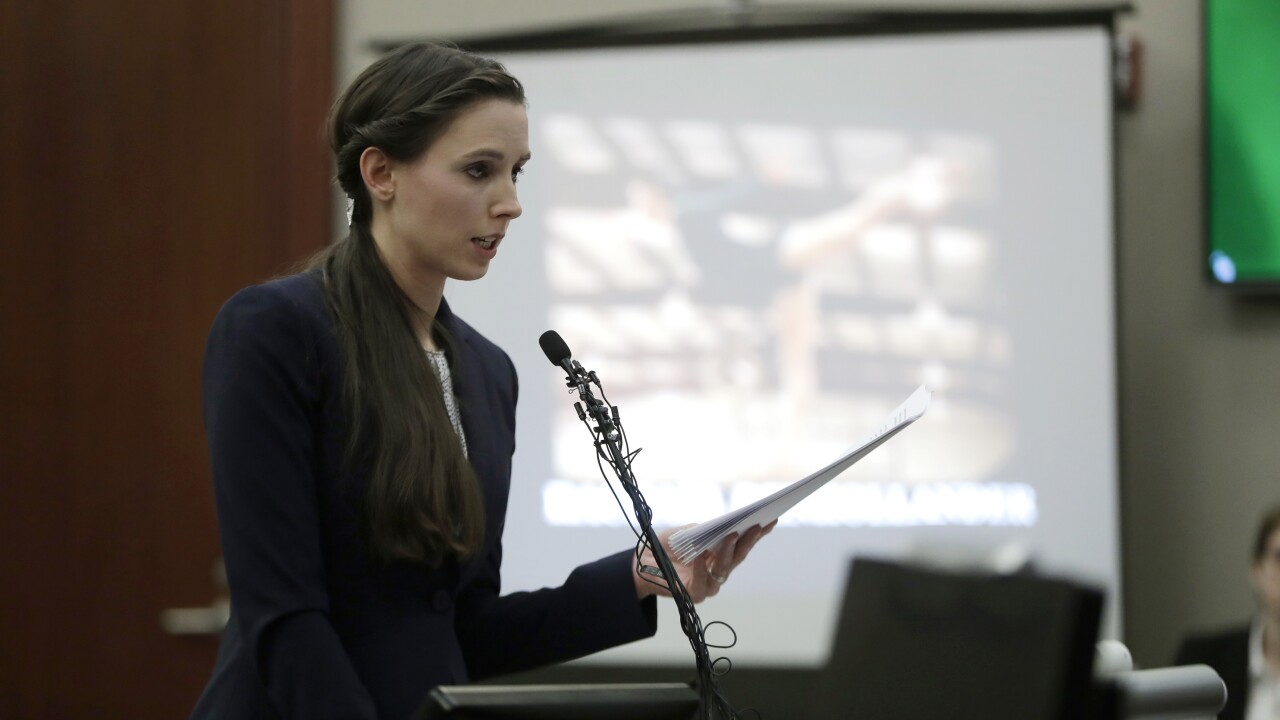 ANN ARBOR, Mich. (AP) — The first woman who publicly accused convicted sports doctor Larry Nassar of sexual abuse said she is "horrified," and "deeply disappointed" with the University of Michigan for how it has handled allegations of abuse by a late doctor at the school.

The university announced earlier this week five former patients of Dr. Robert E. Anderson alleged he sexually abused them during exams and a complaint in 2018 led to a police investigation.

"They had the choice 19 months ago to do the right thing and become leaders," former gymnast Rachael Denhollander said Saturday in an interview with The Associated Press. "They chose corruption - again - and they put the survivors in a place where they had no choice but to speak publicly."

Robert Julian Stone said this week Anderson assaulted him during a medical appointment at the university's health center in 1971. Stone said he alerted university officials last summer, inspired by the national #MeToo movement against sexual misconduct.

Stone was first interviewed by The Detroit News, which began reporting on the allegations before the university announced its investigation. Stone, 69, said he contacted the newspaper because he felt "stonewalled" by the school when he sought documentation on the investigation.

"Instead of immediately pursuing transparency, and saying `How could this happen on our watch? We are going to make sure this never happens again.' They kept it quiet and buried it," Denhollander said in a telephone interview. "They forced the survivors to have to speak publicly to get anything to happen. That's despicable. It's re-victimizing and re-violating."

In announcing the investigation Wednesday, University of Michigan officials said they were making the information public now following a determination the previous day by the Washtenaw County prosecutor's office that no criminal charges would be authorized because Anderson is deceased.

University spokesman Rick Fitzgerald said Saturday the school had been asking the Washtenaw County prosecutor's office if charges would be coming against Anderson for months and found out none would be authorized on Tuesday at the same time the Detroit News was notified.

"I understand why it may look differently to people reading about it, but I can say with complete confidence that we were waiting on the prosecutor to make a decision," Fitzgerald said. "As soon as we learned there would be no charges, we put out a press release, made information available, established a hotline to get more information and offered to provide counseling for those affected in the communities in which they live.

"We're also engaged with an independent law firm to drill down to get the answers to the many questions we all have about how this happened at the University of Michigan. We very much want to get to the bottom of that," said Fitzgerald.

Nassar was sentenced two years ago to 40 to 175 years in prison for molesting some of the nation's top gymnasts, including Denhollander, under the guise of medical treatment.

Nassar, a University of Michigan alumnus, worked as a trainer in the athletic department in the 1980s.

Russ Miller, who was the school's supervisor of athletic training for a decade, told police Nassar was a student trainer of his at the university and recalled how shocked he had been to learn what Nassar did.

Miller made those comments during an interview with university police as part of the department's investigation into Anderson. They appear in the nearly 100 pages' worth of records released Friday by the Washtenaw County prosecutor's office in response to a Freedom of Information Act request by The Associated Press.

Miller said he was similarly surprised to hear accusations of sexual misconduct also had been made against Anderson. Miller remembered Anderson as one of the top doctors with whom he worked during his career.

Records obtained by the AP revealed University of Michigan officials were warned more than four decades ago Anderson was fondling patients during medical exams. He continued working there despite a demotion and went on to allegedly abuse again as a physician with the school's athletic department.