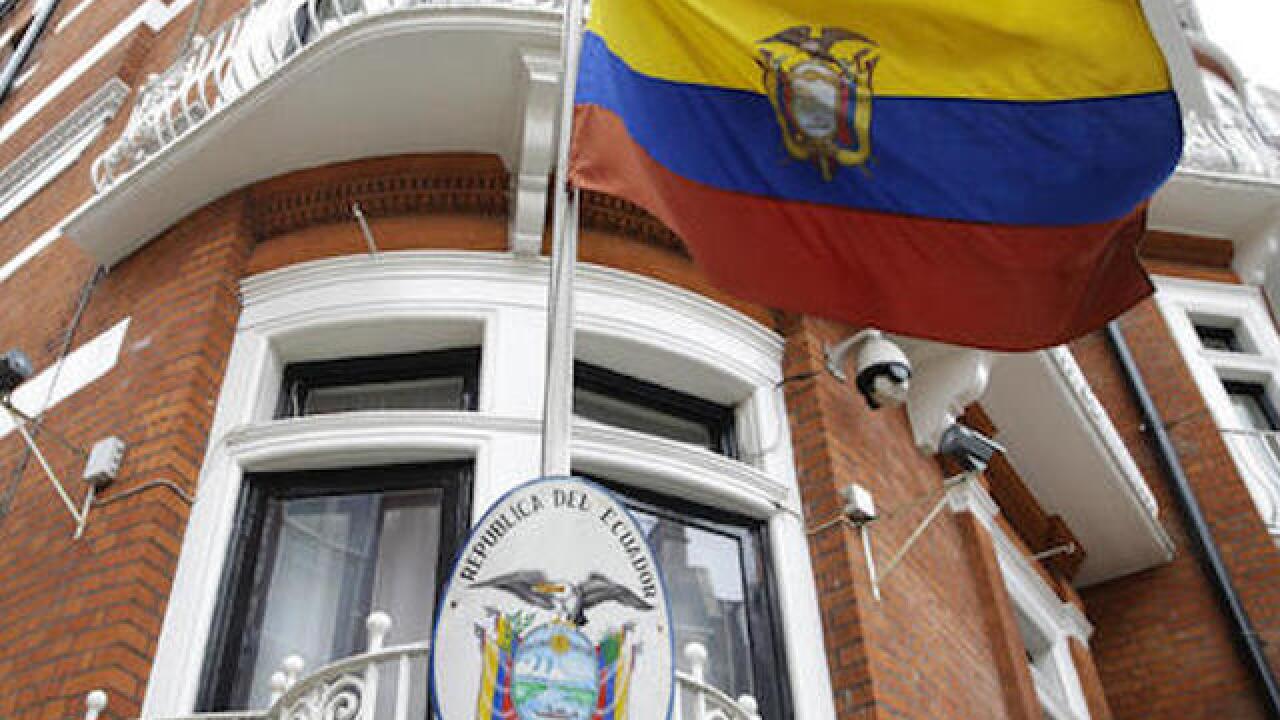 LONDON (AP) — Midway through releasing a series of damaging disclosures about U.S. presidential contender Hillary Clinton, WikiLeaks founder Julian Assange says his hosts at the Ecuadorean Embassy in London abruptly cut him off from the internet.

The news adds another layer of intrigue to a campaign which has been roiled by dramatic leaks and allegations of state-sponsored subversion.

"We can confirm Ecuador cut off Assange's internet access Saturday, 5pm GMT, shortly after publication of Clinton's Goldman Sachs (speeches)," the group said in a message posted to Twitter late Monday. In follow-up messages posted Tuesday, the group claimed U.S. Secretary of State John Kerry had personally intervened to ask Ecuador to stop Assange from publishing documents about Clinton. Citing unidentified "multiple US sources," WikiLeaks said the request was made on the sidelines of negotiations which took place last month in Colombia.

The State Department pushed back on the claims.

Assange has been holed up at the modest embassy suite at No. 3 Hans Crescent for more than four years after skipping bail to avoid extradition to Sweden over sex crimes allegations.

WikiLeaks said unspecified "contingency plans" were in place and the site and its Twitter feed appeared to be working as usual. On Tuesday it released another tranche of emails from Clinton campaign chairman John Podesta, suggesting that, for now at least, the group's ability to publish has not been compromised.

The disclosure was the 11th installation in a series of leaks which have captured the workings of Clinton's inner circle and included excerpts of her well-compensated speeches to investment bank Goldman Sachs. Those leaks themselves are part of a wider cascade that have embarrassed and destabilized the Democratic Party and which the American intelligence community has recently described as an attempt by the Russian government to interfere in the U.S. election.

WikiLeaks staffers Kristinn Hrafnsson and Sarah Harrison did not return repeated messages seeking comment. Staff at the embassy declined comment. Ecuador's Foreign Minister Guillaume Long, approached by The Associated Press on the sidelines of a United Nations conference in Quito on Monday, declined to comment when asked about Assange. His office later released a terse statement in response to "the speculation of the last few hours" reaffirming Assange's asylum status and saying that "his protection by the Ecuadorean state will continue while the circumstances that led to the granting of asylum remain."

The statement made no mention of Assange's internet access.

Assange fled to the Ecuadorean Embassy on June 19, 2012, after a drawn-out and ultimately unsuccessful legal battle to avoid extradition to Sweden, where he remains wanted over an allegation of rape. Assange won asylum, but British authorities have made clear they would arrest him if he tried to leave. London's Metropolitan Police used to maintain a visible presence outside the building, although officers were nowhere in sight when an AP journalist visited on Tuesday.

Assange has carved out a life at Hans Crescent, dining on delivered food, welcoming famous well-wishers and even occasionally addressing the media from the embassy's balcony. But evidence of tension and mutual suspicion with his hosts surfaced after BuzzFeed News drew on confidential Ecuadorean government documents to detail a violent, after-hours confrontation between Assange and an Ecuadorean security guard in September 2012.

The documents also carried a warning that Assange's "evident anger" and "feelings of superiority" could cause stress to those around him.

If Assange is being cut off from the internet for diplomatic reasons, it might jibe with the politics of Ecuadorean President Rafael Correa, who told the Moscow-backed RT broadcaster on Sept. 30 that he'd prefer Clinton over Trump.

"For the United States, I'd like the winner to be Hillary, whom I also know personally and appreciate very much," Correa said.

Whatever the motives, Assange isn't likely to submit to interference quietly. Over the weekend WikiLeaks released three lines of code it described as "pre-commitments," labeling them "John Kerry," ''Ecuador," and "FCO" — an apparent reference to Britain's Foreign and Commonwealth Office. Pre-commitments are cryptographic functions which can be used to verify the integrity of material released subsequently.

Thomas White, a U.K.-based security researcher and transparency activist, saw the posts as a warning from Assange to the named parties that WikiLeaks had ammunition in reserve "in the event Ecuador do not continue to offer him political asylum."