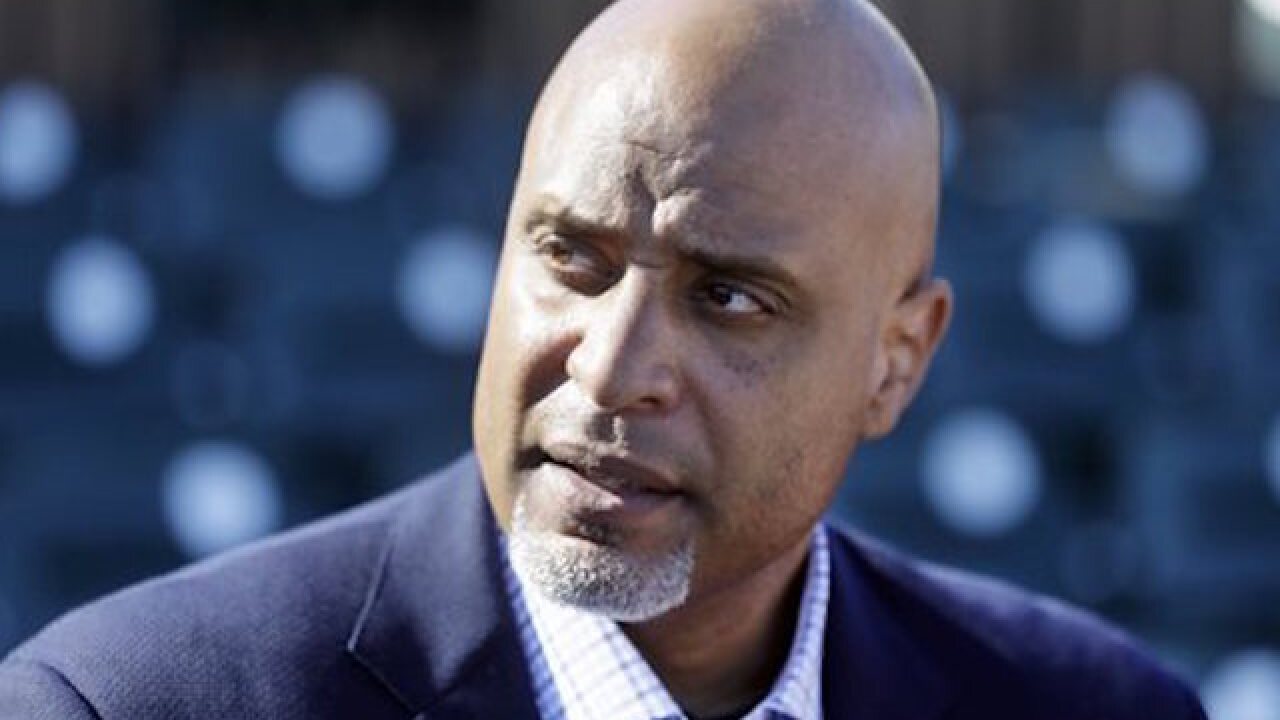 Carlos Osorio
<p>FILE - In this March 17, 2015, file photo, Tony Clark, head of the baseball players' union, talks to the media before a spring training baseball game between the Detroit Tigers and the Washington Nationals in Lakeland, Fla. THe union is frustrated many of its retired membersñespecially minoritiesñcan't find jobs working for teams and has asked MLB to help launch a career preparation project. Clark, a former All-Star first baseman, outlined the plan during an interview with The Associated Press on Thursday, April 14, 2016. (AP Photo/Carlos Osorio, File)</p>

NEW YORK (AP) — The baseball players' union is frustrated many of its retired members — especially minorities — can't find jobs working for teams and has asked MLB to help launch a career preparation project.

Union head Tony Clark, a former All-Star first baseman, outlined the plan during an interview with The Associated Press on Thursday, a day before the 69th anniversary of Jackie Robinson breaking Major League Baseball's color barrier.

Components include college scholarships for all prospects signing professional contracts, creation of a database of minority players and programs to enhance their post-playing employment prospects. The union also wants to establish a coaching school, a "Baseball U." program for continuing education and courses in baseball analytics, statistics and business etiquette.

"Having this conversation every April 15, I'm tired of having it," Clark said. "Continuing to do the same things over and over again while acknowledging annually that we still have the problem that we've had seems to truly be the definition of insanity."

Funding would come from money collected by the commissioner's office from the tax levied on clubs for international signing bonuses.

"We've been working with the union over the last two years to develop programs for retired players in order to allow them to stay in the game, and we look forward to continuing with those programs in future years," MLB Chief Legal Officer Dan Halem said.

MLB retained Korn Ferry last summer to help identify job candidates, with an emphasis on minorities and women, and it hired Tyrone Brooks, who had been Pittsburgh's director of player personnel, in January to be senior director of its new front office and field staff diversity pipeline program. Renee Tirado left AIG to become MLB's senior director of recruitment.

And while baseball has been praised for increases in minority hiring, especially in its central office, the union would like to see opportunities expanded for senior club administration. As focus on analytics have increased, the 30 current GMs include four Harvard graduates, two each from Cornell and Dartmouth, and one apiece from Princeton and Penn.

"I think that most people look at what appears to be a lack of opportunity, and that's what creates frustration" Clark said. "Diversity offers a different vantage point, different experiences, different realizations that inevitably can help move the industry forward. It's not to suggest that John, Steve or Frank aren't equipped to do the job they've been hired to do, it simply suggests our industry has missed opportunities as the result of the backgrounds and engagements therein being so similar."

MLB also has launched youth programs that include Reviving Baseball in Inner Cities, Urban Youth Academies and the Baseball Tomorrow Fund, Clark sees a need for much more. Because of changing demographics in the U.S. and health issues facing the NFL, baseball hopes a higher percentage of youth players would choose it over other sports.

"Given where we're at culturally and given some of the growing concerns about player safety facing parents and their children, not to mention career longevity, the chance to make a real impact, once and for all, is right in front of us," Clark said. "We have to step up and make a commitment to young athletes and their parents that baseball will create and present opportunities, on and off the field, that other sports can't match."

While baseball established a college scholarship plan in the early 1960s, it is available only to players who negotiate its inclusion in their first professional contract and its expansion would be costly.

The union said the career transition program it launched last year is likely to cost $7 million to $8 million in the next three-to-five years.

According to the union, the University of Arizona has suggested a baseball analytics program for players that would cost about $600,000 and set an individual's tuition at $1,250 per class. A player would take six courses, each split into four one-week sessions.

"One of the ways the sport has changed so dramatically is the use of analytics, and that has really hurt the opportunities for former players," said Richard Lapchick, director of The Institute for Diversity and Ethics in Sport at the University of Central Florida. "So for them to be able to get a grounding in how they're used and how to manipulate analytic data is going to be a real great opportunity for players to be able to step into those jobs."

Clark also envisions a "Baseball U." program in which players could keep up their education with course formats that might include online classes, webinars, and lesser course loads. The union said Johns Hopkins and Georgetown had expressed interest in developing a plan.

There also would be a job placement program for jobs in baseball and outside the sport.