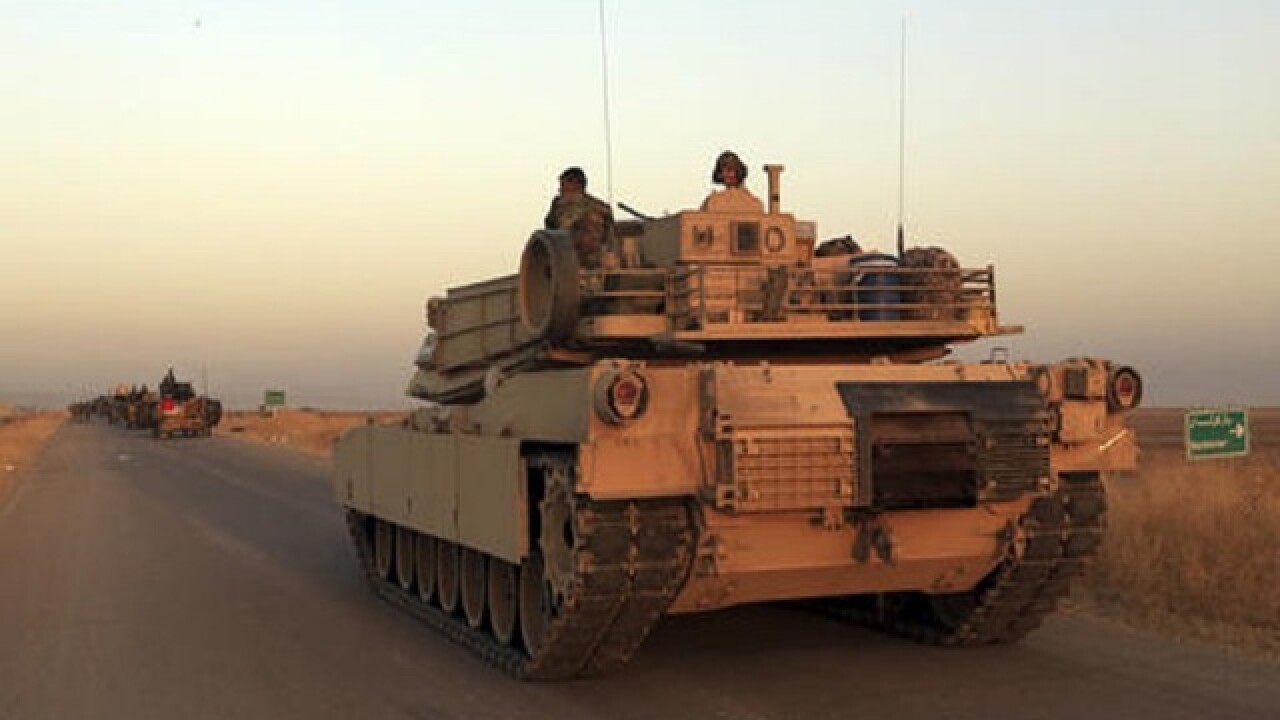 Khalid Mohammed
<p>Iraq's elite counterterrorism forces advance near Mosul, Iraq, Thursday, Oct. 20, 2016. Iraqi special forces charged into the Mosul battle Thursday with a pre-dawn advance on a nearby town held by the Islamic State group, a key part of a multi-pronged assault on eastern approaches to the besieged city. (AP Photo/Khalid Mohammed)</p>

IRBIL, Iraq (AP) — Militants armed with assault rifles and explosives attacked targets in and around the northern Iraqi city of Kirkuk early on Friday in an assault quickly claimed by the Islamic State group and likely aimed at diverting authorities' attention for the battle to retake IS-held Mosul.
Multiple explosions rocked the city and gun battles were underway, said witnesses in Kirkuk, speaking on condition of anonymity as they were concerned for their safety. Much of the fighting was centered on a government compound in the city.
IS said its fighters were behind the attack, which the extremist group said targeted the Iraqi government. The claim was carried by the IS-run Aamaq news agency and could not immediately be verified.
Local Kurdish television channel Rudaw aired footage showing black smoke rising over the city as extended bursts of automatic gunfire rang out. The TV, however, quoted Kirkuk Gov. Najmadin Karim as saying that the militants have not seized any government buildings.
There were no immediate reports of casualties.
The attack comes as the Iraqi government and Kurdish forces are making a major push to drive Islamic State militants from Iraq's second-largest city of Mosul.
Kirkuk is an oil-rich city some 290 kilometers (180 miles) north of Baghdad and southeast of Mosul that is claimed by both Iraq's central government and the country's Kurdish region. It has long been a flashpoint for tension and has been the scene of multiple attacks by Islamic State militants.
Kemal Kerkuki, a senior commander of Kurdish peshmerga forces west of Kirkuk, said the town where his base is located outside the city also came under attack early on Friday. He said the base is now under control.
He said IS maintains sleeper cells in Kirkuk and the surrounding villages, and that a group of IS fighters tried to attack a power station in Dibis village west of Kirkuk with light arms and a suicide bomber.
IS also claimed an attack on the power station, saying that its fighters had stormed the facility and killed all security forces stationed there.
Kerkuki said he believes the attackers infiltrated Kirkuk posing as displaced civilians. The city has absorbed hundreds of thousands of displaced people from neighboring provinces since IS first overran wide stretches of northern and western Iraq in the summer of 2014.
"Many of (the displaced civilians), I'm sure they are working with ISIS," Kerkuki said, using an alternative acronym for the Islamic State group. "We arrested one recently and he confessed (he was part of a sleeper cell)."
Iraqi and Kurdish forces backed by U.S.-led coalition support launched a multi-pronged assault this week to retake Mosul and surrounding areas from IS. The operation is the largest undertaken by the Iraqi military since the 2003 U.S.-led invasion.
Iraqi officials said they had advanced as far as the town of Bartella, 15 kilometers (9 miles) from Mosul's outskirts, by Thursday.
Copyright 2016 The Associated Press. All rights reserved. This material may not be published, broadcast, rewritten or redistributed.