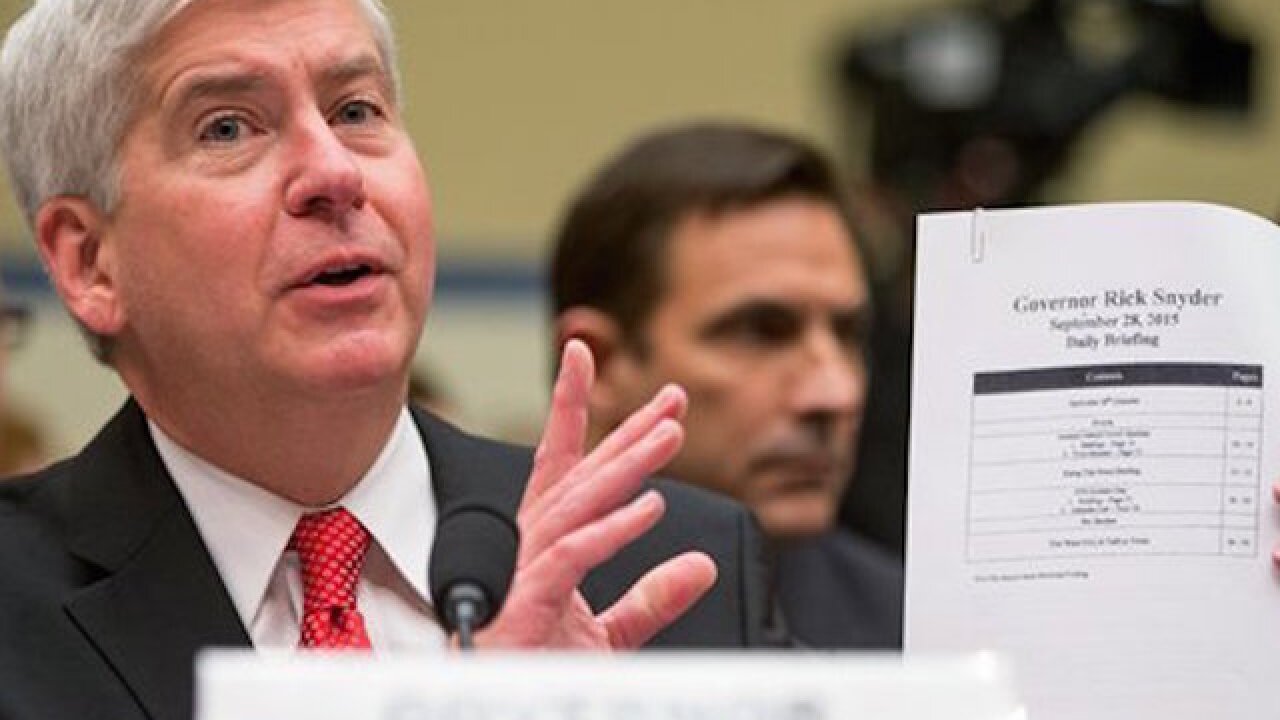 Copyright Associated Press
Andrew Harnik
<p>FILE - In this March 17, 2016, file photo, Michigan Gov. Rick Snyder testifies before a House Oversight and Government Reform Committee hearing in Washington, Thursday, March 17, 2016, to look into the circumstances surrounding high levels of lead found in many residents' tap water in Flint, Mich. tís been two years since problems began with the drinking water in Flint, Michigan, and nearly six months since officials declared a public health emergency. Yet a bipartisan congressional effort to aid the predominantly African-American city is idling in the Senate. (AP Photo/Andrew Harnik, File)</p>

Filed in U.S. District Court in Flint, the suit is one of many arising from the decision to switch the Flint supply from the Detroit water system to the Flint River in April 2014 to cut costs. The move was supposed to be temporary, until Flint could join a new water authority that would pipe water from Lake Huron.

The lawsuit accuses Snyder and others of hatching a "wrongful scheme" to reduce Flint's indebtedness by stopping the impoverished city from buying treated Lake Huron water from Detroit, instead of "invoking time tested, well-honed federal bankruptcy protections for restructuring the debts of municipalities."

State officials have acknowledged erroneously advising Flint officials not to treat the river water with anti-corrosive chemicals, and that not doing so enabled lead to leach from aging pipes and reach some homes, businesses and schools. Testing last fall showed that levels of lead in the blood of some children in the city rose after the water systems were switched.

Lead is a potent neurotoxin that can damage child brain development and cause behavioral problems, and also can sicken adults.

Flint switched back to the Detroit system last October.

Along with Snyder, the suit names as defendants the state of Michigan; the departments of Environmental Quality and Health and Human Services; and a number of state officials, along with emergency managers whom Snyder appointed to oversee the city. Also named are the city of Flint, two of its utility officials and three consulting companies that advised them.

Through their actions, "unthinkable harm has been inflicted on the residents of Flint," the suit said.

It was filed by law firms in Southfield and New York, which said in a news release that they represented more than 400 people.

In a separate class-action lawsuit in federal court in Ann Arbor, attorneys representing the governor and other officials are claiming governmental immunity. The response, filed Monday, said the judge doesn't have jurisdiction and should dismiss the case.

"There are meaningful exceptions (to immunity) that apply to this situation, and their willingness to try to deprive people of their day in court is really breathtaking," said Michael Pitt, an attorney for Flint residents.