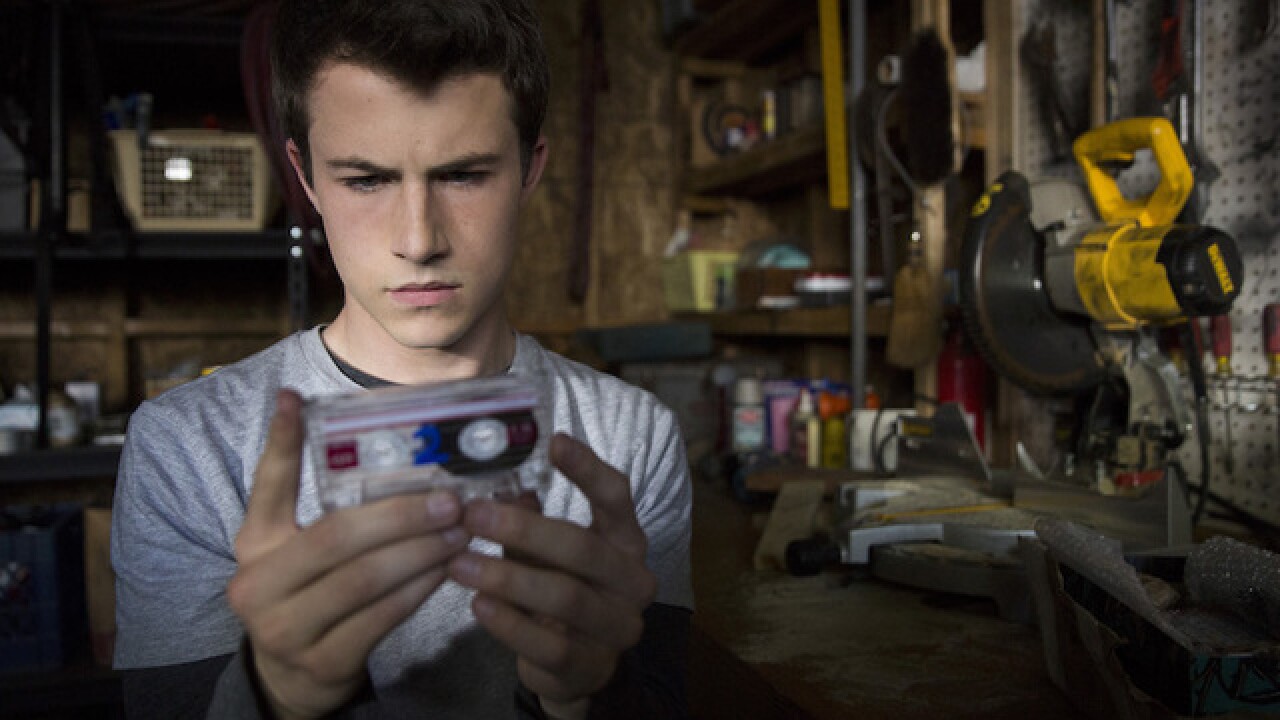 Alexa Curtis, 19, laid her laptop on her dinner table and took a deep breath.

It was a brisk April evening, and Curtis was prepared to spend the night in her Boston apartment watching the new Netflix series "13 Reasons Why."

As the first three episodes of the teen drama unfolded on her computer screen, Curtis' heart began to race.

The series, which premiered March 31, follows the fictional story of a teenage girl named Hannah Baker (Katherine Langford) who leaves behind 13 mysterious audio recordings on cassette tapes after killing herself. She addresses each recording to a person who she says played a role in her tragic decision to end her own life.

"The first thing that popped into my mind when watching it was, 'Wow,' " said Curtis, who founded the nonprofit Media Impact and Navigation for Teens, a program that raises awareness about online bullying.

Curtis said she was bullied in high school and she could have been a real-life Hannah Baker.

"Had I been watching that as the vulnerable, fragile kid that I was when I was 13 or 14, I might have watched that and thought, 'Oh, that's the easy way out. This is going to get me the attention that I need. This is what I have to do,' " said Curtis, who wrote an opinion article in Rolling Stone this month about the series.

"It's not the kind of show that I would say nobody should watch, but I think that every school right now should have an open conversation about it in health class," she said. "Kids should probably even be separately brought aside, as privately as possible, and spoken to about it. Any kids who are known to have depression, to have spoken to counselors or any previous suicide attempts, I think they should be very, very, very talked to in-depth about it."

Some mental health experts say the show could pose health risks for certain young people, such as those who have suicidal thoughts.

Others suggest the show provides a valuable opportunity to discuss suicide risk with young people, as well as teaching them how to identify warning signs of depression or suicidal thoughts among their peers.

Among American young people, those between ages 10 and 24, suicide is the third leading cause of death, according to the US Centers for Disease Control and Prevention.

Each year, about 157,000 people in that age range receive medical care for self-inflicted injuries at emergency departments across the United States, according to the CDC.

Suicide rates among this age group have also been rising in the UK in recent years, according to UK charity Samaritans, reaching more than 15 per 100,000 people aged 10-24 in 2015. In Australia rates were an estimated 50 per 100,000 for the same age group in 2015, according to the Australian government's mental health awareness initiative, Mindframe.

"Suicide contagion" describes when exposure to suicide within a family, within a group of friends or through the media may be associated with an increase in suicidal behaviors, according to the US Department of Health and Human Services.

Among 12- to 13-year-olds, being exposed to a classmate's suicide was associated with being five times more likely to have suicidal thoughts, according to a study published in the Canadian Medical Association Journal (PDF) in 2013.

The risk of suicide contagion and copycat behavior is one of mental health experts' leading causes of concern tied to "13 Reasons Why."

"Research shows that exposure to another person's suicide, or to graphic or sensationalized accounts of death, can be one of the many risk factors that youth struggling with mental health conditions cite as a reason they contemplate or attempt suicide," according to a statement about the show released this month by the National Association of School Psychologists.

However, it's unlikely that one show alone could trigger someone to attempt suicide, said Eric Beeson, a licensed professional counselor who serves as an online faculty member at The Family Institute at Northwestern University.

"Research clearly shows that these images have an influence on suicidal behaviors, but how this occurs is far more important to me," he said. "It is very possible that provocative experiences have a desensitizing effect that makes suicidal behaviors more likely."

One of the writers of the "13 Reasons Why" series has defended the decision not to shy away from main character Hannah's suicide and to include a graphic scene of her death.

In an op-ed published in Vanity Fair last week, writer Nic Sheff revealed that he had once tried to take his own life. He brought that experience to his work on episode 6 of the show.

"From the very beginning, I agreed that we should depict the suicide with as much detail and accuracy as possible. I even argued for it -- relating the story of my own suicide attempt to the other writers," he wrote.

In the op-ed, Sheff detailed how a woman once told him about her own suicide attempt: After she washed down a copious amount of pills with wine, what followed were moments of excruciating pain, of violently vomiting blood and blacking out. Then she dialed 911. The thought of her experience caused Sheff to put down some pills he was swallowing in his own suicide attempt, he wrote.

"If that woman had not told me her story, I wouldn't be here now. I would've missed out on all the amazing gifts I have in my life today," Sheff wrote.

"So when it came time to discuss the portrayal of the protagonist's suicide in '13 Reasons Why,' I of course immediately flashed on my own experience. It seemed to me the perfect opportunity to show what an actual suicide really looks like -- to dispel the myth of the quiet drifting off," he wrote. "It overwhelmingly seems to me that the most irresponsible thing we could've done would have been not to show the death at all."

CNN contacted Netflix for comment but has not heard back from a representative affiliated with "13 Reasons Why."

Cautions and guidance for parents, educators

School districts across the country -- including the Shawnee Mission School District in Kansas and Montclair Public Schools in New Jersey -- are sending letters to parents about the suicide-related content on the show.

"I heard about the series from young people I see in my private practice and from other students," said Andrew Evangelista, mental health and harassment, intimidation and bullying coordinator at Montclair Public Schools.

Evangelista, who has been a therapist for more than 40 years, said he originally sent a letter about the show to school principals and administrators in the district. They encouraged him to share it with parents.

"I felt it was a great opportunity for staff, counselors and parents to connect with their children by using it as a teachable moment," Evangelista said. "The girl Hannah, even though she is fictional, teens -- if vulnerable and at risk -- may identity with her."

Evangelista said parents can watch for warning signs their child may be vulnerable to identifying with Hannah's character. They include the child spending more alone time in their room, being secretive with their phone or computer, or having a history of nonsuicidal self-injury such as cutting, he said.

The counseling department at Shawnee Mission South High School in Kansas also offered some tips in a letter posted publicly to the school's PTSA Facebook page.

"Check it out yourself, do some reading, watch an episode to be aware of the issues in the show. If your teenager is watching it, take the time to have conversations about the content, possibly watching together," the letter said. "Experts feel that the series may be romanticizing suicide and not encouraging teenagers to seek help from family or counselors."

The statement from the National Association of School Psychologists includes "cautions" and "guidance" for educators and families of teens who might watch the show.

"We do not recommend that vulnerable youth, especially those who have any degree of suicidal ideation, watch this series. Its powerful storytelling may lead impressionable viewers to romanticize the choices made by the characters and/or develop revenge fantasies," the statement said. "While many youth are resilient and capable of differentiating between a TV drama and real life, engaging in thoughtful conversations with them about the show is vital."

Curtis, the founder of Media Impact and Navigation for Teens, said she was thrilled to see the association release that statement.

Beeson, the licensed professional counselor, said he thinks the statement was balanced.

"I can't say that there is a group of people that 'shouldn't' watch this show. I think it is more important how people watch it, with whom, and how it is processed afterward," Beeson said. He added that there are elements of the show that he was pleased with and some he was left second-guessing.

"I appreciated the depiction of suicide as a process. There is no singular cause for suicide, and the show depicted the cumulative effect of multiple life experiences leading up to Hannah's suicide. Even though I don't like that the show sometimes vilified the people in the tapes as the 'reasons' why Hannah killed herself," Beeson said.

"One narrative that has been lost in the controversy about this show is the belief by some of the characters that things had to get better, they had to care and treat one another better," he said.

"To me, this show goes far beyond the suicide narrative and evokes a broader conversation about the power of human interaction and connection. I hope that all who watch this show walk away with an appreciation for the importance of every interaction we have, however insignificant it might seem, and the importance to reach out, show interest and care for those around us."

'Those are the Hannah Bakers'

As Curtis reflects on the bullying she endured in high school and the suicidal thoughts she once had, she often thinks about her 14th birthday.

To celebrate the day, a poster with her name on it was hung in a hallway of her high school in Storrs, Connecticut -- a tradition that was practiced with all the students on their birthdays.

"They put terrible words on it, like calling me a slut and the c-word and a b*tch, all of these things," she said. "The principal ended up getting involved, and my mom got involved, and it was just terrible. ... Situations like that, they really stick with you for the rest of your life"

Now, Curtis hopes that "13 Reasons Why" will encourage young people to speak out about personal struggles and not view suicide as "a way out."