March for Our Lives: Students hold events in support of gun control across US 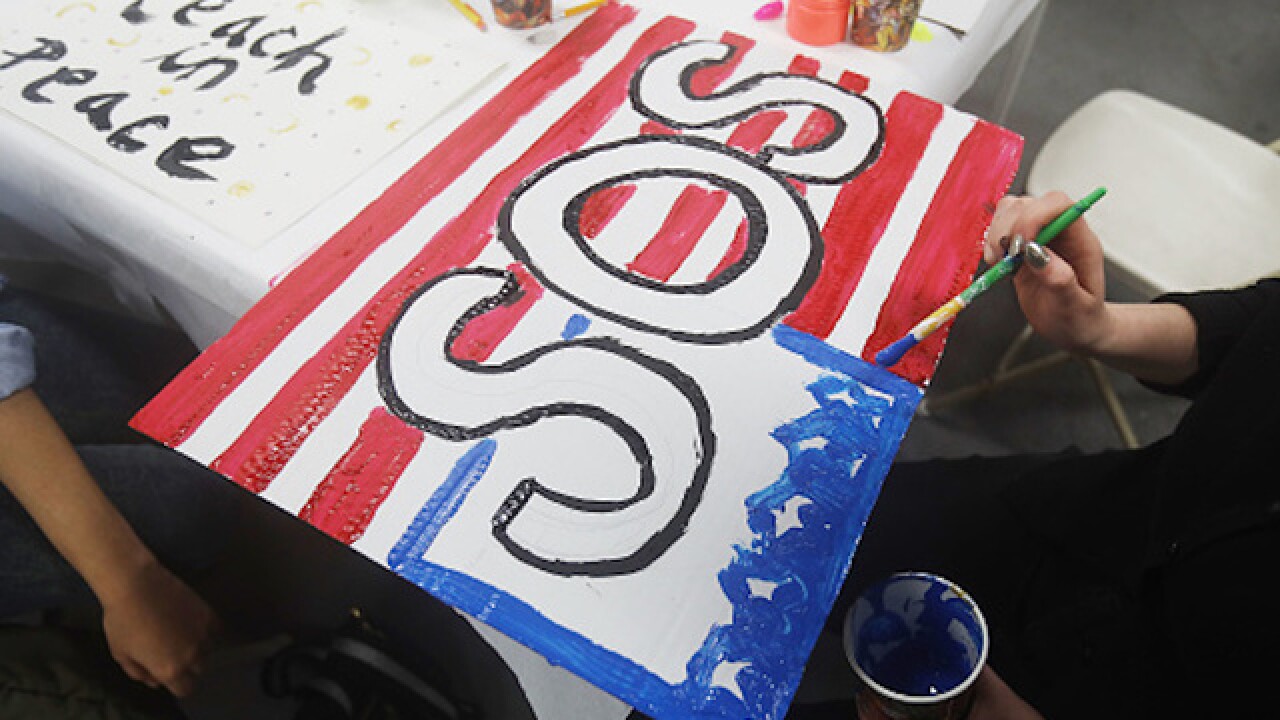 Image copyright 2018 Getty Images. All rights reserved. This material may not be published, broadcast, rewritten, or redistributed.
Mario Tama
<p>LOS ANGELES, CA - MARCH 22: An activist paints a sign to be carried at the upcoming March for Our Lives Los Angeles on March 22, 2018 in Los Angeles, California. More than 500,000 are expected to march for gun control at rallies nationwide on March 24. The marches have been organized by students from Marjory Stoneman Douglas High School where 17 people were killed in a mass shooting February 14. (Photo by Mario Tama/Getty Images)</p>

Survivors of the deadly shooting rampage at a Parkland, Florida, high school are set to lead thousands Saturday in a March for Our Lives on Washington, delivering their impassioned pleas for stricter gun control law to the nation.

PHOTOS: Students take part in 'March for our Lives' across the country

Building on the momentum of last week's National School Walkout , these members of a generation raised on gun violence have been rallying Americans around their cause while honoring the 17 students and faculty members killed on February 14 at Marjory Stoneman Douglas High School.

The march starts at noon, with participants gathering on Pennsylvania Avenue near the US Capitol.

Hundreds of sister marches also are planned across the country and around the world.

One will be in Jonesboro, Arkansas, where 20 years ago Saturday two boys, 11 and 13, ambushed fellow students and teachers in a yard after setting off a fire alarm at Westside Middle School, killing five people.

February's mass shooting at Stoneman Douglas, then the eighth school shooting of the year, moved the young survivors-turned-activists to push lawmakers to address gun violence in American schools with comprehensive gun control legislation, including bans on assault weapons and high-capacity magazines.

"They don't know what it's like to be 20 feet from an AR-15," Parkland survivor Alfonso Calderon , 16, told students at a Washington charter school this week, referring to US lawmakers.

Calderon and other Marjory Stoneman Douglas survivors attended a #NeverAgain -- as their movement is known -- rally this week at Washington's Thurgood Marshall Academy, where two students were killed in separate neighborhood shootings during the last year.

"Every single day you wake up and it might be a thought in your head, 'I might die today,' " Calderon told the students.

"I only had to go through it once. You guys go through it every single day. This isn't a discussion anymore. This is action because that's what we need."

Some Parkland students also met congressional leaders this week at the US Capitol.

"No student should ever have to cover themselves with a deceased classmate to survive, but I was that student," shooting survivor Aalayah Eastmond said.

The movement, started in the aftermath of the massacre with media appearances by student survivors such as Cameron Kasky and Emma Gonzalez, has drawn celebrity support.

Jennifer Hudson, Ariana Grande, Miley Cyrus, Demi Lovato, Common and Lin-Manuel Miranda are expected to attend the march in Washington, according to the event's website.

And celebrities such as Oprah Winfrey, George Clooney and Steven Spielberg each donated $500,000 last month to the march's fund.

More than 800 other events are planned across the United States and in cities overseas Saturday, including London, Madrid, Paris, Tokyo and Seoul, according to the march website.

On April 20, activists are calling for another national school walkout on the 19th anniversary of the Columbine High School shooting.

"In all honesty, they do not care if we do not get out and vote," Parkland student David Hogg said at Thurgood Marshall Academy, referring to politicians.

"If we do not stand up and make our voices heard as Americans, they will not take action."