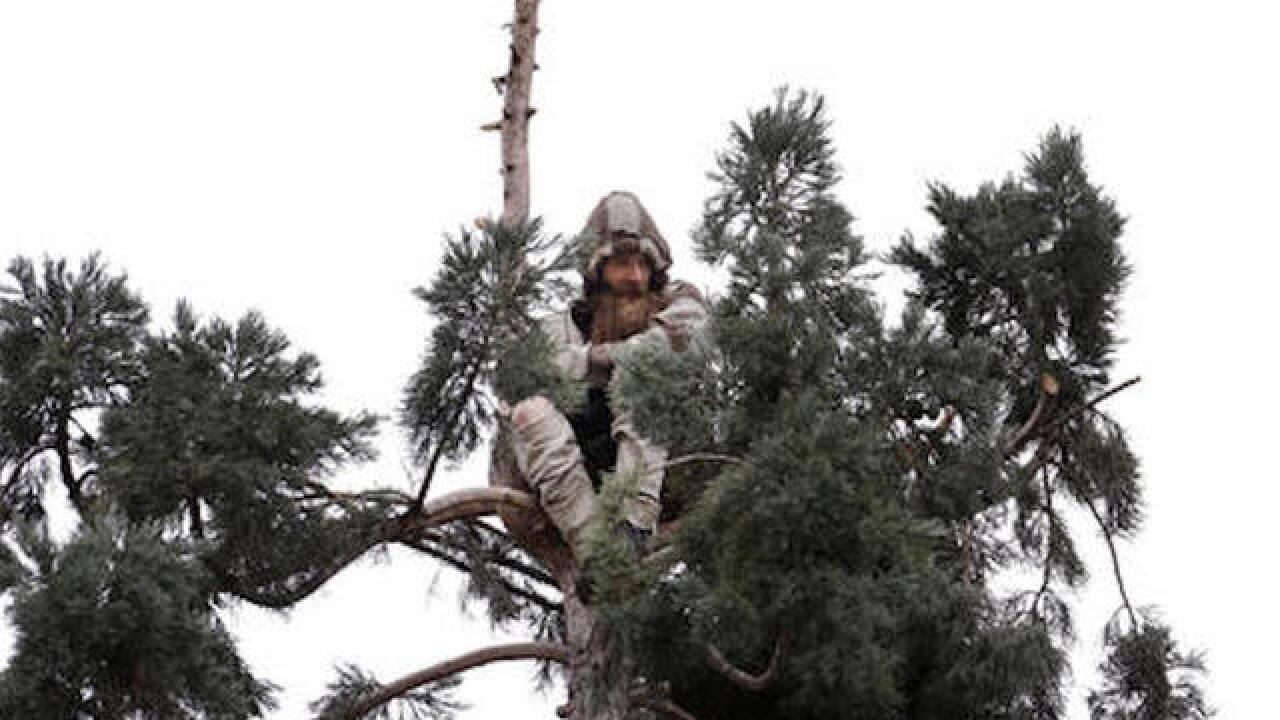 Copyright Associated Press
Elaine Thompson
<p>A man sits near the top of a sequoia tree Wednesday, March 23, 2016, in downtown Seattle. Authorities were alerted to the unidentified man in the tree Tuesday morning and he was still clinging to its branches nearly a day later. (AP Photo/Elaine Thompson)</p>

SEATTLE (AP) — Chef Michelle Matsko paused as she walked to work Wednesday, gazed up from beneath her red umbrella and marveled: After a full day, a man still was perched near the top of an 80-foot-tall sequoia tree in the middle of a shopping district in downtown Seattle.

"I'm really impressed," she said. "It's been raining. He's a trouper."

The unidentified man finally climbed down safely just before noon, having transfixed the city and the Internet for 25 hours while police closed adjacent streets and tried to coax him down.

As onlookers cheered and chanted "Man In Tree" — in deference to the Twitter hashtag by which he became known — he sat down near the base of the conifer and appeared to be chomping on a piece of fruit.

Officers initially kept their distance but soon approached the man, got him on a gurney and took him for a medical evaluation.

Reasons for the drama remained unclear. At times, the man appeared agitated, gestured wildly, yelled and threw apples and branches at officers. Police tried to speak with him from a firetruck ladder and the sixth-floor windows of the Macy's department store next door.

For some, the ordeal raised questions about the city's ballooning homeless population, though police had not confirmed whether the man was homeless. Mayor Ed Murray declared a state of emergency as deaths of homeless people mounted last fall, and the city has authorized new tent cities and safe parking lots for those living without shelter or in their vehicles.

Janice Wilson, who was in town from Crescent City, California, to help her son deal with his mental health and legal troubles, said she was homeless herself 30 years ago.

She repeatedly shouted up to the man: "We love you! Come down safely!"

"I heard people out here laughing," she said. "If somebody's in crisis to the point of putting himself at risk of suicide, what's to laugh about?"

After the man climbed down, the Seattle Police Department tweeted a photo of the tree-like creature named Groot from the "Guardians of the Galaxy" movie with the caption, "Groot job, everybody."

The tweet was just part of the online commotion the incident sparked, with new Twitter accounts dedicated to it and the hashtag #ManInTree trending on Twitter and Facebook. A local TV station live-streamed video of the man as he dozed, shouted and knocked around a stick.

Many passers-by, seeming bemused by the man's antics, pulled out their cellphones Wednesday to snap pictures of his silhouette, accentuated by a long, bushy beard, against the gray morning sky.

Police said they know who the man is but did not release his identity.

"We are now working with him trying to get a clearer picture of what exactly led to this point," said Detective Patrick Michaud. "We'll be able to work with him as he is in the hospital try to get this whole thing figured out."

Seattle Department of Transportation officials said they will review the health of the tree, believed to have been transplanted there in the 1970s.