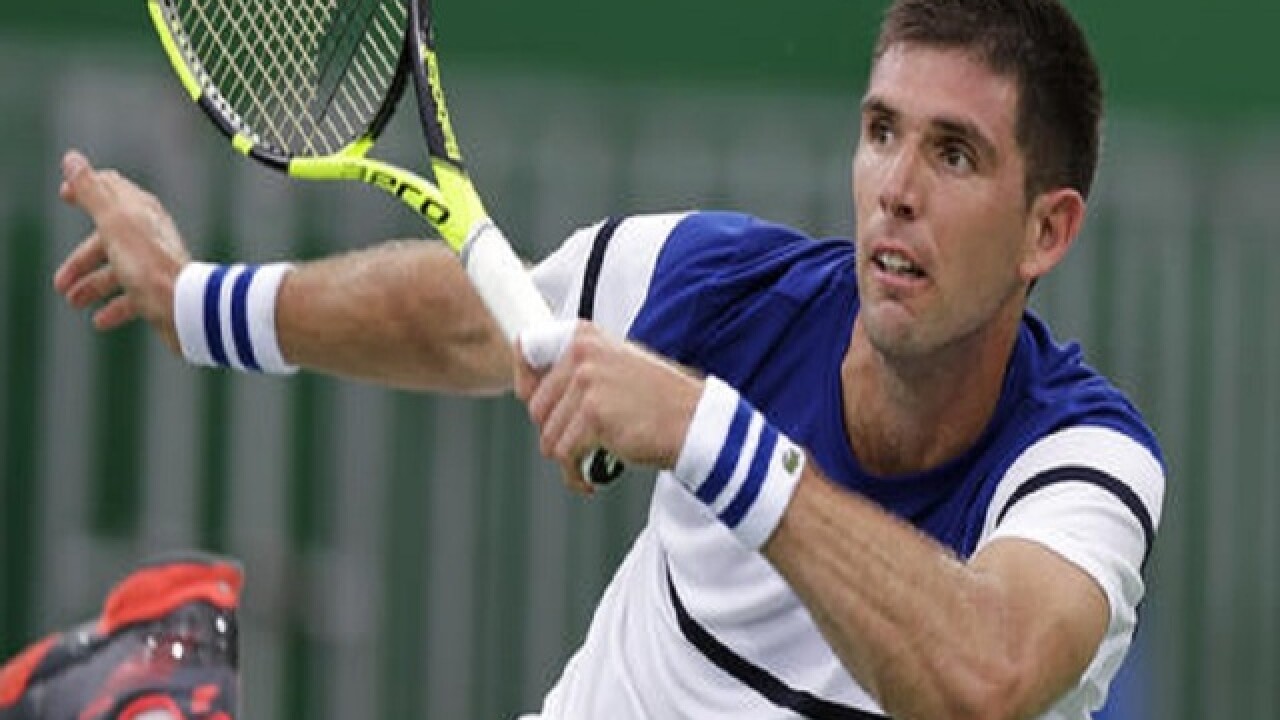 By: Associated Press
Posted at 10:02 PM, Aug 07, 2016
RIO DE JANEIRO (AP) — White tape peeking out from under the red sweat band on his injured left wrist, Rafael Nadal was back in action Sunday, playing his first match in 2½ months.
And he was back at an Olympics for the first time in eight years.
He was not, Nadal insisted after a 6-2, 6-1 victory over Argentina's Federico Delbonis at the Rio de Janeiro Games, back at full strength, however. And he will not, he also insisted, discuss the problematic tendon sheath in his racket-wielding arm for the rest of the event.
"My wrist is not perfect. My wrist needs more time," the Spaniard said. "If it was a 'normal' tournament on the circuit, I wouldn't be here. My wrist is not perfect. It isn't 100 percent."
Nadal won a gold medal in singles at the 2008 Beijing Games, but he missed the 2012 London Olympics because of a knee injury that also forced him out of the U.S. Open later that season.
"There's only one chance every four years to experience an Olympic Games. It's something unforgettable," said Nadal, who carried Spain's flag during the opening ceremony. "I missed the last one in London, so I didn't want to miss this one."
As a former No. 1-ranked player and a 14-time Grand Slam champion, Nadal is one of his sport's central figures, so his health is a significant topic in tennis. It was a key subject on a wind-swept, star-studded second afternoon of competition in Brazil that included straight-set wins by 2012 singles gold medalists Serena Williams and Andy Murray. Top-seeded Novak Djokovic faced Juan Martin del Potro at night.
During Williams' uneven 6-4, 6-2 elimination of Australia's Daria Gavrilova in the main stadium, winds that reached 25 mph caused delays of about 2 hours on the eight smaller courts. Murray beat Serbia's Viktor Troicki 6-3, 6-2 in less than 1½ hours.
Neither Williams nor Murray had played since winning Wimbledon titles a month ago. Both played doubles later Sunday alongside older siblings — and both lost. Williams and her sister Venus are three-time gold medalists as a team but lost an Olympic doubles match for the first time, beaten 6-3, 6-4 by the Czech Republic's Lucie Safarova and Barbora Strycova. Murray and his brother Jamie wasted five set points in the second tiebreaker of a 7-6 (6), 7-6 (14) exit against Brazil's Thomaz Bellucci and Andre Sa.
Nadal's contest Sunday was his first since he surprisingly showed up at a news conference at the French Open wearing a blue brace on his left wrist and announced he would be withdrawing from the clay-court tournament he has won a record nine times.
A question about the wrist arrived early in the English portion of his post-match session with reporters Sunday, and when the Spanish portion began with a query about the same topic, Nadal's response started with a smile and these words: "I said it in English, and I'll say it again in Spanish."
He made clear both times that he didn't want to address the subject the rest of the way in Rio.
Nadal appeared a tad tentative in the early going against Delbonis, a fellow left-hander who is ranked 43rd, but eventually displayed confidence with his heavy-topspin forehand, producing half of his 14 winners with that stroke.
Along the way to breaking for a 3-2 lead, Nadal smacked one down-the-line forehand winner, then threw a big uppercut and yelled, "Vamos" — eliciting a loud roar from spectators. There was a nearly identical celebration, and crowd reaction, when the match concluded.
Nadal played cleanly, making only 15 unforced errors, while Delbonis made 31.
Indeed, the one thing that truly bothered the third-seeded Nadal on this day (aside, perhaps, from the wrist questions) were the on-court digital scoreboards behind each baseline. Early in the match, Nadal complained to chair umpire Carlos Ramos that the readout made it tough to see the yellow tennis balls during points.
ITF spokesman Nick Imison said the brightness was adjusted during the match to accomodate Nadal.
"You can't play," Nadal said, "when you're losing sight of the ball."
Copyright 2016 The Associated Press. All rights reserved. This material may not be published, broadcast, rewritten or redistributed.