Judge may factor in Hastert lies for sentencing 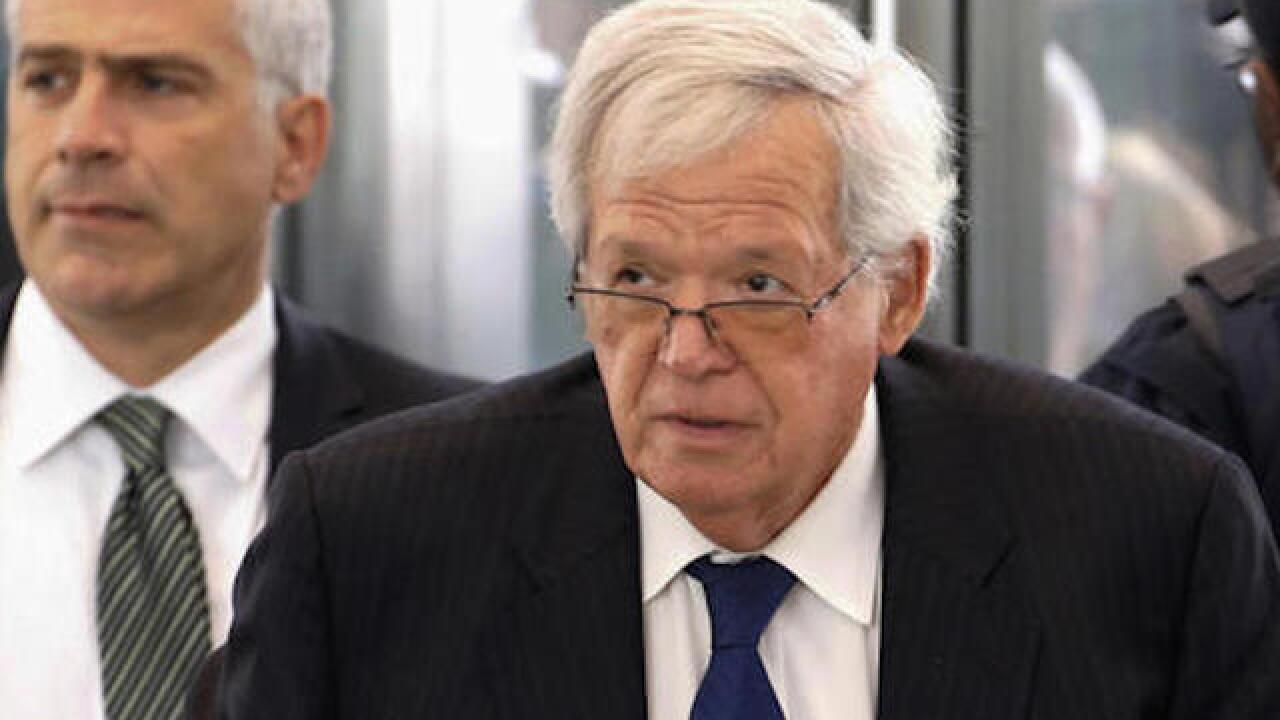 By: Associated Press
Posted at 9:26 PM, Apr 13, 2016
CHICAGO (AP) — Dennis Hastert's lawyers have suggested that what occurred with a 14-year-old in a motel decades ago may not qualify as sexual abuse, while the judge in the former U.S. House speaker's hush-money case signaled Wednesday that he'll factor in Hastert's lies to investigators when he determines a sentence.
Federal prosecutors said at a hearing Wednesday in Chicago that someone identified as "Individual D" — one of at least four boys who prosecutors say Hastert sexually abused in the 1970s — would be one of two witnesses seeking to speak at the April 27 sentencing. The other is a sister of a now-deceased accuser.
The 14-year-old, referred to as "Individual A" in court papers, is at the core of the case.
Hastert pleaded guilty last fall to breaking banking law as he sought to pay $3.5 million to the man not to divulge his misconduct when he taught and coached wrestling from 1965 to 1981 in Yorkville, a Chicago suburb. After first saying he withdrew large sums because he didn't trust banks, Hastert told investigators he was the target of a bogus sexual abuse claim.
Individual A told prosecutors Hastert abused him in the late 1970s in a motel room on the way home from wrestling camp. He said Hastert, the only adult on the trip, touched him inappropriately after suggesting he would massage a groin injury the boy had, prosecutors said.
Defense attorneys called details of Individual A's account of Hastert's behavior "ambiguous."
"We are not so certain that the incident qualifies as sexual misconduct, especially for a coach and trainer 42 years ago," they said in the filing, unsealed Wednesday.
Prosecutors said there is no doubt.
Hastert "used his position of trust as a teacher and coach to touch a child's genitals and then undress and ask the child for a back massage in a hotel room," they said in a Friday filing. "There is no ambiguity; defendant sexually abused Individual A."
Judge Thomas M. Durkin indicated several times Wednesday that he was disturbed by Hastert's claims to agents in 2015 that Individual A was extorting him. Hastert was accusing someone he victimized of "holding him up," Durkin said. Those lies, unlike the abuse allegations, were not distant history, the judge said.
"That's not conduct that's 40 years old," Durkin said. "That conduct is ... a year old." About how Hastert's false allegations against Individual A might affect his sentencing calculations, the judge added: "Among the aggravating factors in this case, that's a big one."
Among other assertions in the 14-page defense filing:
— Individual A could still sue Hastert if he's not paid the portion of the $3.5 million he hasn't received — $1.8 million, plus interest.
— The probation office was wrong to speculate in a sealed report that Hastert could have abused others after getting into politics. "Similarly, there is no basis for the conjecture that Mr. Hastert engaged in any sexual misconduct overseas," it says.
— When FBI agents first came to speak to Hastert unannounced in December 2014, they wore wires to secretly record his answers.
Prosecutors say agents initially had no inkling sexual abuse was behind the payments Hastert made to Individual A. When Hastert said Individual A was extorting him, agents even helped stage and record phone conversations with the former wrestler.
It all backfired on Hastert, whose political career had taken him to speaker, second in the line of presidential succession.
Investigators said the calls — recorded without Individual A's knowledge — showed it was Hastert who was lying. Agents said Individual A even asked Hastert to bring in lawyers to formalize their payment agreement, but Hastert refused to involve anyone else, prosecutors say.
Hastert's conviction isn't for sexual abuse, but for structuring cash withdrawals to avoid detection. Prosecutors have said they would have preferred sex-abuse charges, but the statute of limitations ran out decades ago.
Individual D recalled to prosecutors that Hastert often sat in a recliner in the boys' locker room with a direct view of stalls where they showered. He said he was 17 when Hastert performed a sex act on him after first starting with a massage.
The defense filing says, "Hastert does not contest the allegations of Individual D" but "has no current recollection of the episode."
Hastert's lawyers asked to keep their filing sealed. But Durkin refused, saying the government's account Friday of multiple accusers meant the most explosive allegations are already public.
Prosecutors didn't recommend a specific sentence in their filing, simply noting that guidelines suggest something between probation and six months behind bars. But their reference to sexual abuse on nearly every page of their 26-page filing was likely aimed at giving Durkin grounds for a far stiffer sentence. The judge could even impose the maximum penalty on the bank count — five years in prison.
Defense lawyers have asked for probation, citing Hastert's health and the steep price — they say — he has already paid in public shame.
Associated Press 2016