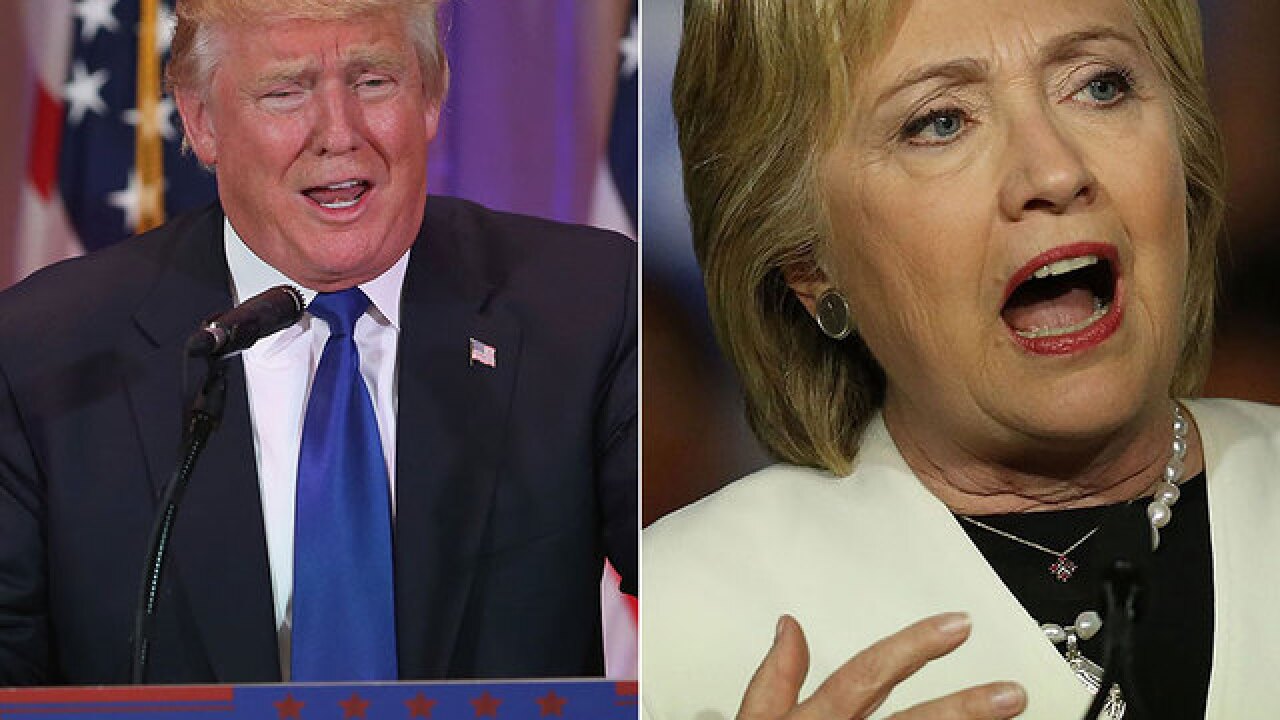 Princeton neuroscientist and numbers guru Sam Wang sat down with TrailMix 2016 this week to discuss his predictions for the presidential race. Talking to podcast co-hosts Miranda Green, Francesca Chambers and Justin Green, Wang laid out how most mainstream media sites are missing the mark when they look at state-by-state polling and made a case for why any candidates who aren’t Donald Trump or Hillary Clinton might as well drop out now. Here, in question-and-answer format, is what Wang had to say. (The interview has been edited for length and clarity.)

Miranda Green: So Sam you’ve been described as a numbers wizard, and you’ve been compared to Five Thirty Eight’s Nate Silver. There was an article that called your separate forecasting the “battle of dweebs.” Is that an accurate description?

Sam Wang: Well, we’ve never met in person, and so if one criterion for a battle is being waged entirely online and through the inter-tubes, then yes it would be a battle of dweebs. I like to think I’m reasonably well socially adjusted. I couldn’t speak for him.

MG: You were one of the first people to kind of come out and crunch the numbers and talk about the fact that Donald Trump had a chance at actually winning the nomination.

SW: I would say that anybody paying attention to polls in July or August would say what Nate Silver said back then, which was that candidates can come and go, and the odds are that somebody like Trump would be gone in a couple of months, the way that Herman Cain was, the way that Rick Santorum more or less was, or the way that Michele Bachmann was. And there were several things that happened starting around November or so that suggested that there was more to that story.

One was (Trump’s) numbers stayed up in a way that the other ones did not, and if you looked at just the numbers and you didn’t look at his inflammatory statements, you only looked at what respondents to polls said, the graph looked more like Mitt Romney’s graph than others. In other words, Trump went up, stayed up, and kept on up for months at a time.

The second thing was that if we look at polling data from January of previous election years and look at how strong Trump was relative to his competitors and compare that with the historical record, very few Republican candidates in his position have failed to get the nomination, and in particular he was looking as strong as George W. Bush in 2000, or John McCain in 2008. Without factoring in our opinions about candidates, that kind of thing, the numbers were pretty clear. I think that that just goes to show that there are a lot of things that we see when we look at the news and when we watch these people on our screens, you know, we can’t possibly believe that a guy like Trump could have any kind of chance. Well, that could be. But once we have hard polling numbers I think it’s a good idea to at least listen, and ask what are those numbers telling us.

Francesca Chambers: In your review of the data, what have you found in terms of why he has such staying power? You mentioned some of his statements that some have called inflammatory, and yet he continues to do so well, not just in polls but in these elections. And so, why do you feel that is?

SW: Trump’s support has been for the last month around 40 percent. It hasn’t really moved up or down from that number. So he’s had this really fixed level of support that is less than a majority. In the Republican system of nominations there’s this rewarding of who gets number one, even if they don’t get a majority. That process seems to have been put in place originally to reduce dissension and to reduce the possibility of an acrimonious nomination fight. Presumably they thought it was going to be somebody kind of normal, like Scott Walker or Marco Rubio. What they got instead was Donald Trump.

The Democratic side has representation that is more like proportional representation, and furthermore, the Democratic side lacks a fragmented field with lots of candidates. So if you look at the support -- Donald Trump’s support is at about the same level percentagewise in his party as Bernie Sanders on the Democratic side. So, on some level, Trump doesn’t have that much support. It just so happens that they have rules in place that make it OK. So he benefits from rules--the rules are really the star this year.

Justin Green: The last few weeks we’ve seen in news cycles that Donald Trump is getting smoked by Hillary Clinton in terms of favorability. He is getting smoked by Clinton in terms of general election polls. Some of the pushback that we’ve seen the last 10 days or so has been that so was Ronald Reagan in 1980. I’m just curious for your thoughts on how much of a chance a candidate has historically to recover from being deeply in the hole when it comes to favorability.

SW: Yeah, people when they talk about upsets or reversals often like to bring up the election of 1980 with Ronald Reagan against Jimmy Carter. But there is not as much movement in 1980 as people suppose. The other thing to talk about is the fact that it is better not to cherry pick extreme examples when making an argument. Because let’s say that the most extreme example was Reagan vs. Carter in the last 10 presidential elections, and he came from behind -- let’s just stipulate that all that is true. What that tells you is that OK, well maybe there’s about a 1-in-10 chance that that’s going to happen in any given year.

I would encourage you do a more broad and neutral look at all the data, which is, when you look at April polls between the two major candidates, whether it be Clinton versus Trump, Reagan versus Carter, Romney versus Obama, whatever it might be, what is the typical amount of movement that happens? The answer to that (it) is about six points or so.

OK, so how far is Hillary up on Trump right now? She’s up about eight or nine points. So, seemingly what that suggests is that Hillary’s got an edge on Trump.

Now the other thing is that the favorability numbers for Trump are like super bad, like minus 30. So that means that something like 35 percent of Americans approve of him and 65 percent do not approve of him. And there has never been anybody in the history of that question being asked of voters -- nobody with numbers that low has ever been elected president.

JG: Could you explain a little bit of what it means when someone who follows and forecasts elections says, I’m assigning like, a 92 percent chance of x candidate winning x state. Like, what does that mean in layman’s terms?

SW: I’m currently saying that Trump has a probability of about 70 percent to get a majority of pledged delegates by June. So 70 percent sounds like a lot, and you know I think it’s a lot, but it also means that there’s a 30 percent probability that something else is going to happen. So broadly speaking I would say that people should not regard these percentages as really being a real commitment by the person uttering them, until they get past 80 percent or so. So yeah, somebody says 82 percent, that means they’re pretty sure. If somebody says 70 percent, they might not be so sure.

FC: Do you have any bold predictions about the general election that you’d like to share with us?

MG: Let me add, I read on your blog, this was back in March, you wrote something like you don’t think it’s going to be a very big news month; you pretty much think the election had already been settled?

SW: Well let’s see. I think it would be very, very surprising for Sanders to pull it out and become the Democratic nominee. People talk about winning or losing New York or winning or losing California. On the Democratic side that is actually not the appropriate way to think about it at all because delegates are proportional. And it’s more appropriate to say, ‘OK how much would Sanders support have to swing for him to pull it out of the fire?’ So I would say that the probability of Sanders being the nominee at this point, based on the way that the Democratic elections are run, is less than 5 percent.

On the Republican side it’s less clear. If Trump ends up getting a majority of pledged delegates, he’s going to be just over the top and we’re going to be waiting until June 7. Looking to November, I mean, it looks probable that it’s going to be Hillary Clinton versus Donald Trump. If not, then the most obvious pairing is Hillary Clinton and Ted Cruz. In both cases she’s favored.

MG: Final question: One of the words that we hear used a lot is momentum… as a numbers guy, I want to get your opinion on that word.

SW: I think in the context of politics momentum is mostly a crock. I come out of physics and for us in physics momentum is mass times velocity. It is really hard to tell when looking at a single primary race, whether a candidate is trending up or down. And the reason for that is that the states vary so much from one another. My take on the word momentum is that it apparently seems to mean ‘I as a journalist am excited about writing about this person, and I got a real thrill at that rally,’ or ‘I just saw Cruz really rock it in Wisconsin.’ If you see the word momentum in a piece of political reportage, I think there’s a pretty good chance you should be careful and look at everything else in the article, and not necessarily buy into the momentum concept.