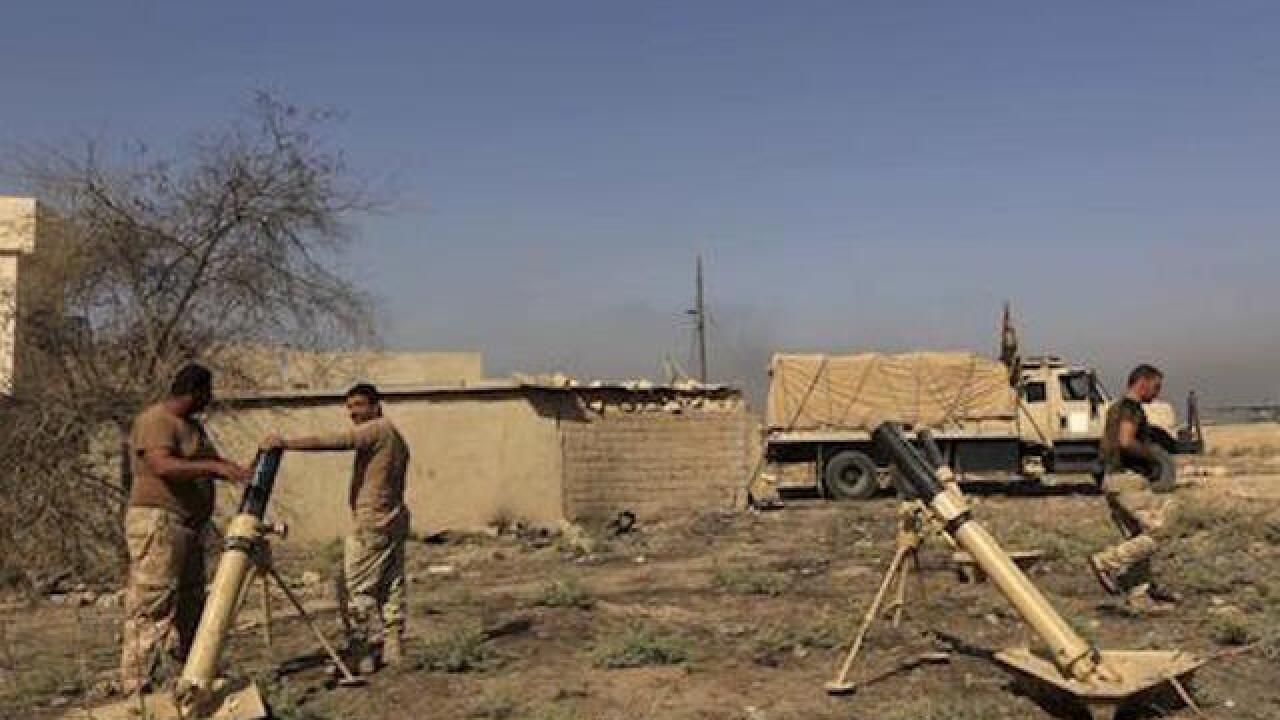 Copyright Associated Press
Khalid Mohammed
<p>Iraqi army soldiers prepare mortars in preparation for storming Mosul, in the town of Bartella, Iraq, Sunday, Oct. 23, 2016. The Mosul offensive involves more than 25,000 Iraqi ground forces as well as U.S.-led coalition aircraft and advisers. It is expected to take weeks, if not months, to drive IS from Iraq's second-largest city, which is home to more than a million civilians. (AP Photo/Khalid Mohammed)</p>

BARTELLA, Iraq (AP) — Iraqi forces shelled Islamic State positions outside Mosul on Monday as fighting to retake the extremist-held city entered its second week and a rights group urged a probe into a suspected airstrike that hit a mosque, killing over a dozen civilians.

The purported airstrike in northern Iraq struck the women's section of a Shiite mosque on Friday in the town of Daquq amid a large Islamic State assault on the nearby city of Kirkuk. That assault was meant to distract the Iraqi forces and their allies from the massive operation around Mosul, the country's second largest city.

Human Rights Watch said Daquq's residents believe the attack was an airstrike because of the extent of the destruction and because planes could be heard flying overhead. The New York-based watchdog said at least 13 people were reported killed.

The U.S.-led coalition and the Iraqi military, which are waging the offensive to drive IS from Mosul, are the only parties known to be flying military aircraft over Iraq.

Col. John Dorrian, a U.S. military spokesman, said the coalition had "definitively determined" that it did not conduct the airstrike that killed civilians in Daquq, and had shared its findings with the Iraqi government, which is carrying out its own investigation.

"The Coalition uses precision munitions and an exhaustive process to reduce the possibility of civilian casualties and collateral damage because the preservation of civilian life is (of) paramount importance to us," Dorrian said.

Iraqi Brig. Gen. Yahya Rasool, the spokesman for the Joint Military Command, confirmed the Iraqi government was investigating the attack. He declined to say whether Iraqi or coalition planes were flying in the area at the time of the explosion.

The strike in Daquq, around 40 kilometers (25 miles) south of Kirkuk, took place as dozens of IS militants attacked several government and security compounds in and around the city of Kirkuk, some 170 kilometers (100 miles) southeast of Mosul. The assault lasted for two days and killed at least 80 people, mainly security forces.

IS launched a similar attack on the western Iraqi town of Rutba, hundreds of kilometers (miles) away from Mosul, on Sunday. Rasool said the situation there "is completely under control," and IS militants have no presence inside the town.

Dorrian, the coalition spokesman, said "Iraqi forces continue to attack the enemy with coalition air support" in Rutba and that "operations are ongoing."

He says coalition airstrikes have destroyed five Islamic State vehicles and killed a "significant" number of militants in the town, which is hundreds of kilometers (miles) from Mosul.

The IS-run Aamaq news agency posted a video online that it said showed fighters attacking a military position on Sunday north of Rutba.

Over the past week, Iraqi and Kurdish forces have been battling IS in a belt of mostly uninhabited towns and villages to the north, east and south of Mosul, pushing to within 9 kilometers (5 ½ miles) of the city.

Shortly afterward, a convoy of special forces advanced toward the village of Tob Zawa, encountering roadside bombs and trading heavy fire with the militants. Loudspeakers on the Humvees blared Iraqi patriotic music as they pushed toward the village.

The campaign to retake Mosul comes after months of planning and involves more than 25,000 Iraqi troops, Kurdish forces, Sunni tribal fighters and state-sanctioned Shiite militias. It is expected to take weeks, if not months, to drive IS out of Iraq's second largest city, which is still home to more than a million people.

The militants captured Mosul in the summer of 2014, when they swept across much of northern and western Iraq. IS has suffered a series of setbacks over the past year, and Mosul is its last major urban bastion in Iraq.